How many basic knots do you know? A helpful guide to 7 of them

Woohoo, 7/7! A while back I was among those advocating the Adjustable-Grip hitch as an alternative to the Taut-Line hitch, some people say it is (1) easier to tie and (2) easier to adjust. https://en.wikipedia.org/wiki/Adjustable_grip_hitch.

There are also some better alternative bend knots - the Sheet Bend is not a great knot. A fun alternative is the Zeppelin bend, allegedly used for tying down your dirigible. It is very secure and remains easy to untie even under heavy loads. https://en.wikipedia.org/wiki/Zeppelin_bend

The Bowline is my go-to knot. I spend a fair amount of time on the water.

Plus with the “rabbit thru the hole and around the tree” instructions it’s one the most memorable.

The Alpine butterfly is a better alternative to the bowline in IMO. Its nearly impossible to screw up (where a bowline can be danger if it is tied wrong and slips around a human or animal appendage under load), and it can be tied in the middle of a rope without access to an end.

The explanation of the granny knot thing is missing the why: a granny knot is worth understanding and recognizing (and correcting) because it does not hold well. It tips over under load because it is not symmetrical.

I always tie my shoes in a square knot because it makes me feel more symmetrical, and not prone to tipping over under load.

Is it easy to break? I like the Bowline because usually just a good wack of the hand it breaks. The butterfly loop, also known as lineman's loop, butterfly knot, alpine butterfly knot and lineman's rider, is a knot used to form a fixed loop in the middle of a rope. Tied in the bight, it can be made in a rope without access to either of the ends; this is a distinct advantage when working with long climbing ropes. The butterfly loop is an excellent mid-line rigging knot; it handles multi-directional loading well and has a symmetrical shape that makes it easy to inspect. In a climbing co The...

The square knot/reef knot is a bad one to teach people outside its niche use because it’s dangerous for tying ropes together (particularly if the rope sizes are different). You want the sheet bend for that. The whole point of the reef knot is to have a knot which is easy to undo with one hand when it’s under load, which is not what you want for fastening something securely…

You’ve gotta start with the basics. 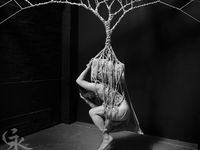 The beautiful rope and photographic art of Garth Knight

My goto knot is to just leave whatever I want tied into a knot lying around for awhile. Eventually, it’s tangled beyond the point of ever undoing. It’s magic!

Seriously, I can’t do knots. I’m lucky I can tie my shoes.

Seriously, I can’t do knots.

Remember the Boy Scout rule. If you can’t tie a knot, tie a lot.

I didn’t realize what the inspiration for the (wonderful) Ylvis song was. Thanks for enlightening me!

One knot that I would recommend knowing in addition to these is the Rolling Hitch. Really helpful if you need to relieve tension on a loaded line temporarily (eg sailing issues) or pulling objects

in case anyone gets confused, from some random web site:

Tautline Hitch is essentially a Rolling Hitch tied on the standing part of a tight line after it has been secured around a object.

ISTR being shown something once called an “Aircraft tiedown hitch.” It was similar to a trucker’s hitch, but after you’d tightened it, you pulled on a loop somewhere and that part of the knot collapsed, tightened the knot slightly, and fixed it. I have now idea how it was tied.

I’m a fan of the Spanish bowline. Not that it it a particularly useful knot, but it is kind of pretty.

Besides, the Zeppelin bend is pretty.

One big advantage of the bowline is that it can be tied one-handed. For rescue knots, that alone ends a lot of discussions. (Imagine trying to tie a butterfly around yourself while at the end of the rope!)

You’ve gotta start with the basics.