How Matchbox cars were made in 1965

Thanks BB! I was always wondering about that. Vroom Vroom!

I would have gone with Rodlie over Lesney. But that’s me.

We got to see how a pantograph was used for scaling wood type when we went to the Hamilton Type Museum this past weekend. It’s very neat to see how it was employed in scaling down the car models.

Interesting to note that they were Hackneyed even from the start…

While the march of progress towards desktop replicators is all very impressive, these analog prototyping and production methods were downright beautiful.

I have several of these from that era, they are extremely well made.

I had never heard of a pantograph before. It seems like it would be technically possible to use a giant pantograph and build the mold directly from a real car.

Then there’s the phenomenon of restoring/customizing Hot Wheels and Matchbox cars. Worth a look for car/model buffs: 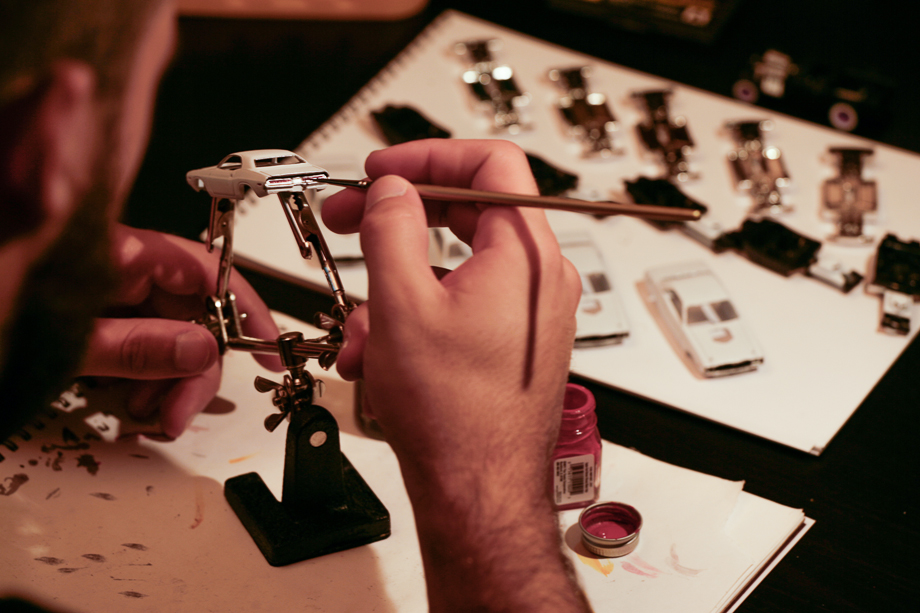 Hello everyone! Where to begin? I guess I can start off by telling you that I’m Luke Baumstark, a 24-year-old from Rancho Cucamonga, California. I work as a woodworker and a waiter at a local steak house, and I’m also a part-time student. Cars have...

I understood that it was an innovative axle design in Hot Wheels that ultimately led to them dramatically succeeding over its competitors.

In 1969, two years after appearing in America, Mattel's Hot Wheels entered the U.K. model car market. Their low-friction axles and bright paint schemes gave new play value and appeal. Dinky and other British brands rushed to catch up, usually unsuccessfully. Each manufacturer responded with its own version of Hot Wheels innovations – Dinky's name was "Speedwheels" (Force 1988, p. 8). The company continued to make innovative models, with all four doors opening (a first in British toy cars), retrac...

I understood that it was an innovative axle design in Hot Wheels that ultimately led to them dramatically succeeding over its competitors.

Well, until your friends or your stupid brother/sister mashed them into the floor and bent the axles, of course.

Oh don’t tell me the cars that I admired and played with so much were… gasp… British.

No wonder they were always in the little toy mechanic’s shop.

I had never heard of a pantograph before. It seems like it would be technically possible to use a giant pantograph and build the mold directly from a real car.

The important thing about the wooden prototype is that it’s designed with simplified geometry, suitable for molding. If you watch the video carefully, you will see that the wooden car’s body is split in half down the middle, and its surfaces are slightly tapered (called draft) to allow it to slide out of the mold easily.

I dont recall seeing a matchbox that big, this point always confused me.

Maybe they were using Cook’s Matches. Those boxes were pretty big

Before gas stoves had pilot lights, you had to use a match to light your burners and oven. The matches commonly used were far beefier than the tiny sort that are now handed out in bars and such. I haven’t seen one in quite a few years, but if I remember correctly, they’re about 2.5" long and the box they came in was maybe 4" x 3" x 1.5" high. I suspect that this is the matchbox referred to.

Ohio Blue Tip was perhaps the most well-known brand in the USA. My father-in-law collected antique cast iron match holders that were designed to hang on the wall near the stove to keep them dry and for convenient access (tin was more common however). There is a suprising variety of clever and sometimes cheeky designs.

Here’s an example I found with a quick websearch. Notice that the angled plate near the top is ribbed. That’s the striking surface for the matches, which are stored under the hinged lid with the cherub on it.

I do remember that kinda thing in the house of an elderly relative from my childhood. Thanks for the reminder.

This is great. I’m left wondering how much the process has changed over the years.

My brother and I used to fight over who got the Ferrari. The Iso Grifo was also a favorite. Now I have a real Lotus and he has a minivan. WINNER!