How to manage anxiety and depression in 10 easy* steps

I don’t know. Whatever works ya’ know? I try not to judge.

Who is “Faris”? I am not familiar with this contributor. More details, please. Not asking without good reason.

Interesting the book I am currently reading is Alice Isn’t Dead by Joseph Fink. It started off as a podcast. Joseph Fink co wrote Welcome To Nightvale with Jeffrey Cranor, but Alice Isn’t Dead is 1000x better. Anyway, the protagonist with anxiety. Which actually turns out to help her during the story. It’s a horror and when shit starts to go down one of the badies asks her if she’s scared. Her reply was basically “Yes, I am scared, being alive makes me scared. You’re not special because you scare me.” It’s a good story.

There is depression that keeps one from even wanting to read this description of it. Too hard to see oneself on display. It doesn’t help that, hey, someone else feels like this. Just make it go away. I don’t want any solutions. I don’t believe in them.

Yes, there is. I think there is an element of addiction in depression (and vice-versa); they seem to me mirror images of sorts. You can become so resigned and numbed to it that any resistance feels absolutely futile. But I do think, as for the addict, ultimately there is a choice. For me, knowing many others suffer similarly, and are willing to share their struggles and successes helps. Baby steps.

Bruce k Alexander frames it as follows:
All addicts are suffering
The root of it is psycho social isolation
I believe that this contributes a great deal to the harm done to us by our competitively individuality

That’s nicely written and does remind me of a song that encapsulates what you’re talking about - the trusted companion “licking my neck and saying she’s my friend” or the feeling that small problems seem almost insurmountable “melodrama here in my kitchen sink”.

I’m identifying a lot with what others are saying in here.

I started suffering from severe depression around the time I hit 20. Spent a good chunk of time on anti-depressants, one of which was taken off the market seeing as people tended to kill themselves more often on it. That was a fun ride. Eventually got though the worst thanks to a combination of CBT and Henry Rollins (seriously), but the thing is it never goes away. It’s not something you can be cured of, at least not as far as I’m aware, and I’ve talked with a lot of people who have had the same experience. The black dog is always out there, stalking you. Best you can do is put him off the scent or figure out how to outsmart him.

So the article actually seemed really good, right up to the big reveal. Most of that list had little to do with anything but the most acute cases of depression. All of the first 6 items could be tidily wrapped up into “do the basic shit.” If you really want to get past things you need to go a little more in-depth. You need to consciously work on identifying those behaviours and thought patterns which are bringing you down. You have to recognise them, acknowledge them for what they are, and then work hard to stop yourself from doing them when they crop up again. That’s when real progress starts being made.

Now it sure isn’t easy. I’m still here almost 25 years after I first started taking a knife to myself and concocting household pharmaceutical cocktails, but I still have to run those checks. Especially when there are more stress triggers around me at work, at home, whatever. But as a means to keep things from getting out of control again, it works like nothing else. (For me and some others I know at least, YMMV)

I concur. My belief is the root of depression is very similar. We live on a broken planet, in a broken culture, which places material things and celebrity above family, community and individual self-worth and agency. Throw in the social media magnifier (especially for young people) and hardly surprising mental health issues are on the rise…

Changing calendars changes everything - they are our most fundamental institution

It shapes how we think of history destiny and our place in the cosmos.

feels fine, you are no longer depressed,

I missed this first time around.

Again, there’s no evidence that clinical depression goes away. Yes, the symptoms may subside, but lack of symptoms does not mean lack of illness. There’s a reason the term “remission” gets used.

Again, this can be harmful, because as @Tamsin_Bailey said, people act like “I thought you were over that,” if symptoms reappear, which tends to reinforce depressive mindsets. Getting better and falling back often feels more like failure, especially since you were supposedly cured.

Depression is more like a kind of virus that gets into your brain and can lie dormant but resurface at any time. Kind of like how chicken pox becomes shingles.

Sorry, but this is a statement so full of wrong it isn’t even funny. Worse, it does damage to those people who do have anxiety and depression, but not in quite the same way you do.

I think this article was trying to do two things at once: 1) talk to people with depression and/or anxiety about strategies that work (at least somewhat) for the author; 2) inform people who have never experienced mental illness what it is like. Jumbling those things together ends up with dumb statements like the one you called out (and makes virtually all popular writing on mental health infuriating).

The list is plainly meant to be personal. “Drink less” isn’t universal advice, and for some people, “Check your email less” might be on there instead of “Check your email.” It’s poorly communicated.

Right on. I know what I SHOULD be doing better. I am not delusional or in denial or stupid. I have a metaphor for my divorce, but also for my life which is better now, but not where I want to be:

I feel like I was on a boat and I fell off. Now I am treading water with all my energy while the boat moves on. I am getting yelled at for not swimming to the boat, but I am doing all I can just to keep above the water. I know I could try to swim to the boat, or even head to shore - move in SOME positive direction. But it is all I can do to keep treading water. 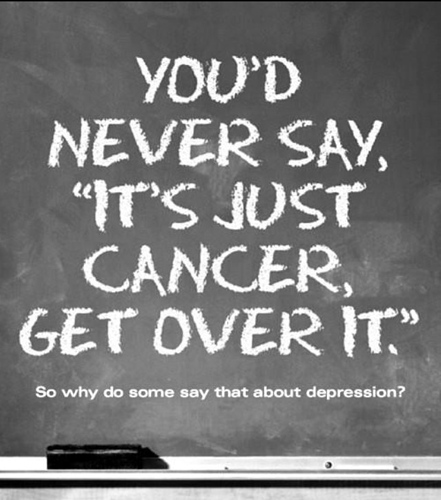 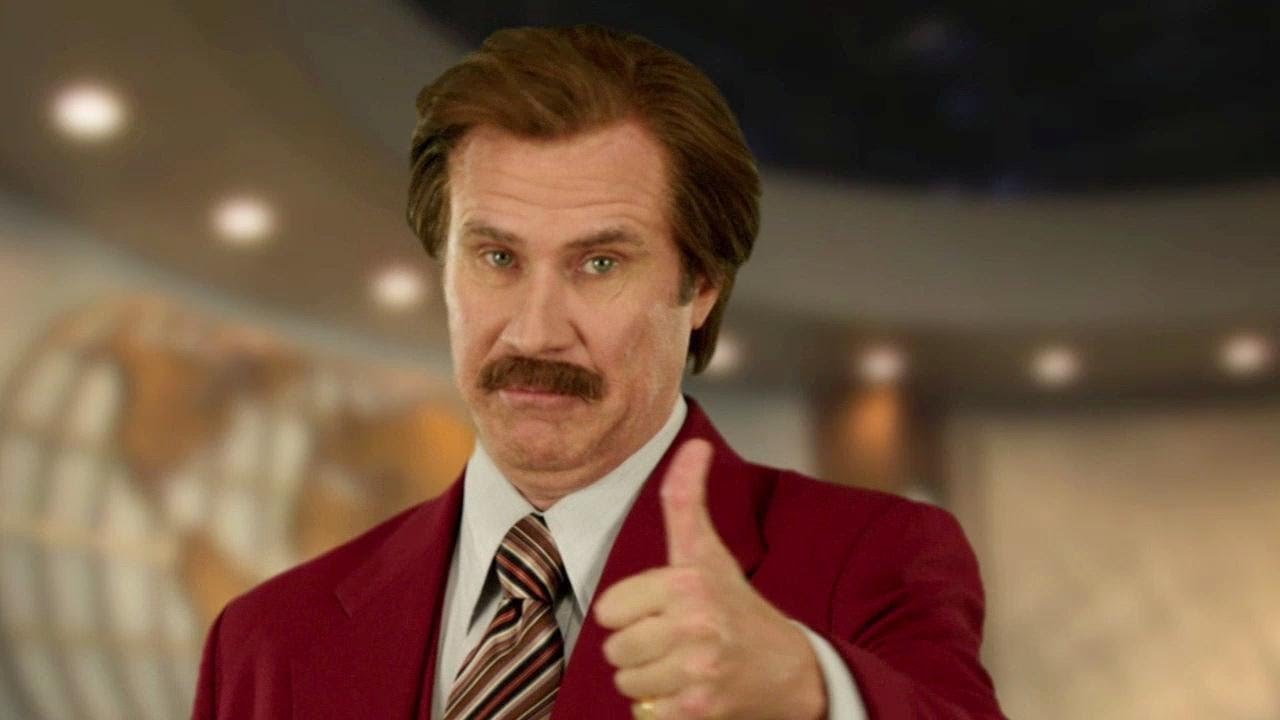 I feel like I was on a boat and I fell off. Now I am treading water with all my energy while the boat moves on.

Sounds like you’ve come to terms with the fact that you were on the wrong boat in the first place; that’s big! I think depression can bring deeper levels of awareness and clarity, if you let it; I try to see it as a gift as well as a curse (what other choice do I have ;). I saw an interview with Jim Carrey where he referred to depression as “deep rest”. That resonates with me. In a world of endless distraction, it can allow you to really sort out the most important things in life…Don’t be too hard on yourself! Treading water takes commitment and energy. You’re getting in shape for the right boat this time and will choose wiser.

Those ten are a lovely start. Seriously.
But the condition, the illness is like cancer: Can go into remission but can by definition always come out of remission.
From my experience, best thing are healthy human connections. of course, they’re hampered by one being let’s say as attractive as people not suffering from serious depression. It’s also hampered by low esteem that goes with depression.
Meanwhile: I’ve spent the past couple of days hoping to die (I’m old enough to just drop dead so it’s a viable hope). (Zero sympathy sought, just noting the feelings for context.) That’s not my point but during that time, I had something of an epiphany that serious depression is the psyche’s way of telling one that one, well, I don’t want to say should die so let’s leave it that it tells one that this is isn’t exactly the best world for us.
Too: Living in hopeless, shitty times doesn’t help.
All of the above FWIW, of course.

Healthy human connections help enormously, but when that is not viable, having a pet can help keep you going. I would not be here without my birds. They are an emotional tether that remind me the world is not all bad.

I am well acquainted with the feeling of hoping to die while not wanting to commit suicide because suicide is more traumatic to our loved ones. You want out, but suicide is risky because you could survive the attempt and be even worse off. Wishing it would happen naturally is just easier, cleaner, and somehow comforting.

I just want you to know you are not alone. I don’t know how to make that feeling go away. I just know the more connections you can make with the world, the easier it seems to live in it. Depression (for me) tries to cut off all those connections, and I have learned to re frame that it is time to prune some connections and it is time to look in another direction to connect to the world.

I try to remember: 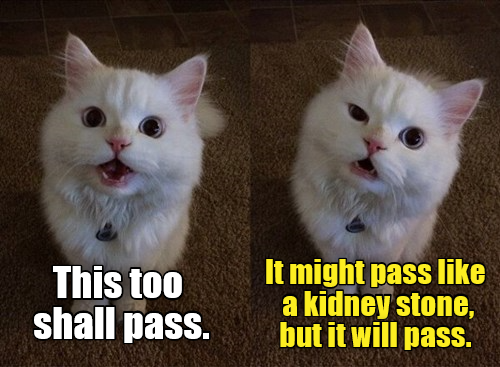