How to Talk to Your Children About Mass Surveillance

Apparently this is the way it is done in 'murica: 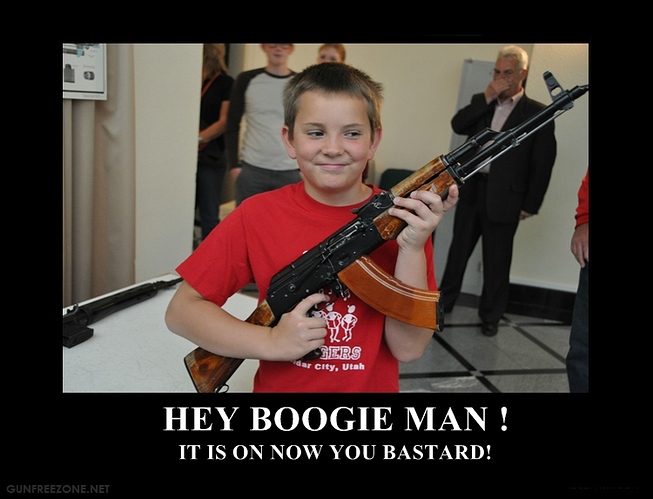 When Hannah was six:

That kid has irresponsible parents. They need to teach him proper trigger discipline. The only reason to hold a rifle that way is if he is about to shoot from the hip at something in the rafters to his left. If not, then his finger doesn’t belong on the trigger.

Yes, that is what makes the parents irresponsible /snark

I’d like to avoid sparking off the conversation about what kinds of arms should and shouldn’t be allowed, or the problems of proliferation of arms in civil society. I have nuanced views on it that are frankly boring and off-topic here.

But, as long as pretty much everyone in the US has a right to bear arms, and simple and easy access to weaponry, I say the very least we can do is teach children (and adults) firstly: to not touch a firearm if you have no experience or training with them, and secondly: how to properly handle a firearm in a safe way (eg. trigger and range discipline, and how to safely unload and make safe various weapons).

I don’t belong to the NRA, I’m not particularly conservative. If anything I’m liberal. But it’s important, from a harm reduction standpoint, to teach everyone how to safely handle dangerous items. There are a hell of a lot of functioning guns in the US, so it makes sense to try to mitigate some of the risk induced by the fact that they even exist.

There is a simple solution: inculcate, in your children, one simple truth:

Elected Officials are like Diapers, they need to be changed frequently, and for the same reasons.

And that means switching teams every so often, too. . .

Furthermore, judge a candidate by what THEY have said and done, not their peers, not their party. There are scumbags and there are unsung heroes on BOTH sides. . . .

Fair enough. I didn’t mean to sound so critical.

Aside from Cory’s kids, how many first graders have a need to know? I mean, you could write a children’s book I suppose…

I’m into letting my kids be kids. There will be plenty of time for them to worry about adult issues when they are adults. They only get a few sweet years to be children and shouldn’t have to be briefed about heady issues. I don’t think you’re somehow preparing them for the world by talking about things like surveillance. You might be creating anxiety and a lot of paranoia though. “Honey, now that you are six, it’s time you learned about all the ways mysterious powerful strangers have to spy on you. Are they spying on you right now? Maybe. Who knows? It’s best to just assume they are. Sweet dreams. What? Now you want to sleep with the light on? But they’ll get better resolution that way.”

Children aren’t your peers. They are children and they already have enough to worry about and work out.

To be fair, “How to talk to your kids about…” articles are usually about things that we’d rather not be discussing with our kids but that they might have questions for us about. If it’s been all over the news, they have been exposed to it and may be curious.

I thought children usually learned about unaccountable mass surveillance at an even younger age: Santa, God, dead relatives who watch over them, etc.

How to talk to your children, about mass surveillance?

Read them their Miranda rights, upon exiting the womb…

That’s a good point. You never see articles called, “How to Talk to Your Kids about Dessert.” Might be a big unmet need out there!

Read them their Miranda rights, upon exiting the womb…

I don’t think children have Miranda rights, sadly. And they’re working on the rest of us.

Sure, if you let them watch what’s all over the news. You can also control what a six year old is exposed to and not leave the news running in their presence. I’d go so far as to say you have a responsibility to protect them from a lot of adult news.

Since six-year-olds can read things and talk to other people (including other six-year-olds) the total-information-control approach doesn’t seem like it will be a viable option. I don’t know where my two-year-old learns some of the things she learns, I imagine this problem increases with age.

I’m not advocating total information control, which is of course impossible and a creeper endeavor. I’m just saying watch your adult conversations around children and don’t unnecessarily expose them to things in your own home. Precisely because they are exposed to so much that you can’t control, it’s nice to be able to mitigate the inappropriate stuff at home where you can.