How Wim Hof, "The Iceman," withstands such extreme temperatures

Most people don’t freeze their sperm until it’s OUTSIDE of their bodies.

(Sorry, carryover from the cake thread.)

How does he survive? Turns out he gets himself high as fuck and then just ignores the cold.

It’s a little surprising he hasn’t had any major cases of frostbite with that technique. Positive thinking only goes so far.

Publicity. He does it with publicity, with the help of gullible “researchers”. 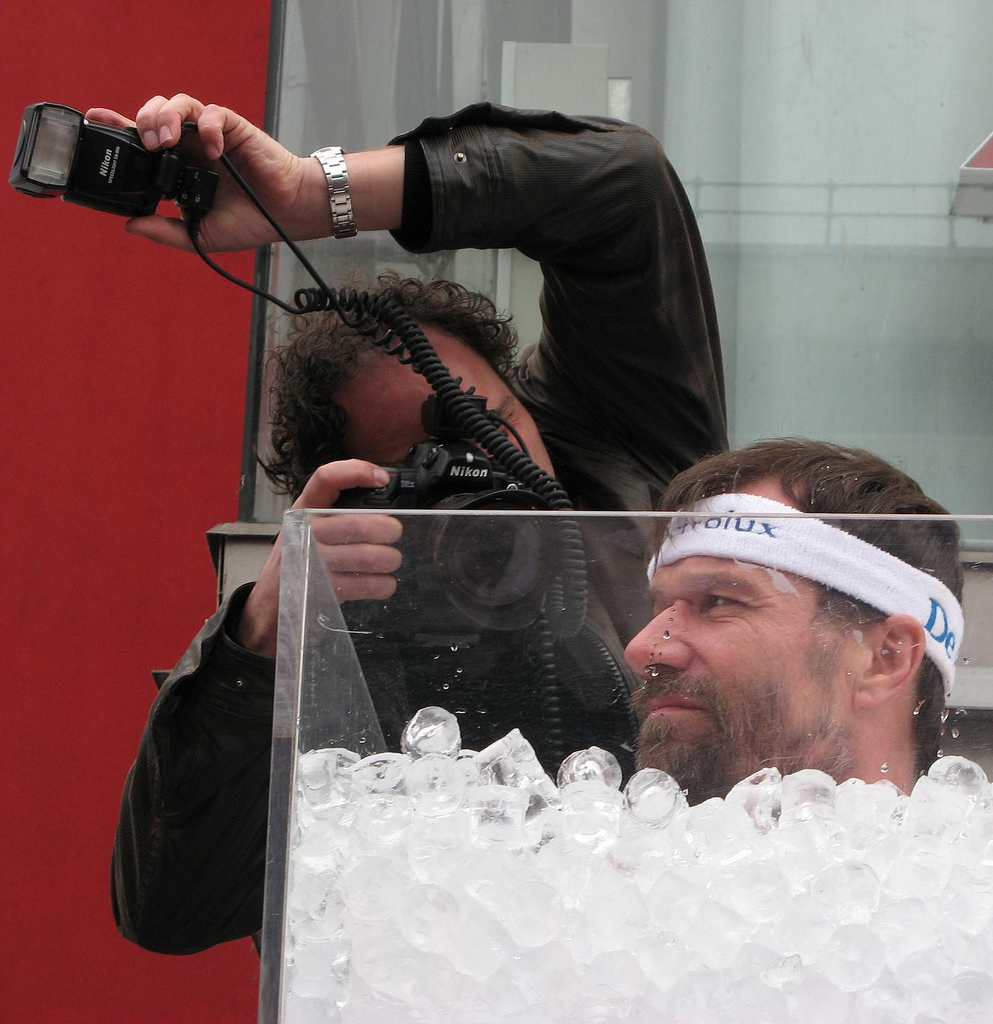 Dutchman Wim Hof earned his nickname ‘The Iceman’ for his world records involving the cold – standing for almost two hours in a crate full of ice cubes, that sort of things. But in recent years he is promoting the methods that he claims enabled him...

I had never heard of Wim Hof until Jon Hopkins started talking about how he and his breathing techniques inspired his new album.

Came for this, leaving happy.

Musik found that, when exposed to cold, Hof activates a part of the brain that releases opioids and cannabinoids into the body. These components can inhibit the signals responsible for telling your body you are feeling pain or cold, and trigger the release of dopamine and serotonin. The result, Musik says, is a kind of euphoric effect on the body that lasts for several minutes.

I could really use this in my life.

Am I the only one who first read this, and thought “How Wim Hof” was the guy’s name?

So he can ignore the pain but what about the damage being done? That’s why we experience pain after all. Our bodies are reacting to damage. So, how does he not get frostbite?

So, how does he not get frostbite?

One of the causes of frostbite is reduced circulation in the extremeties due to the body reducing energy loss and protecting the core in hopes of surviving. If that response is supressed then normal circulation remains, (or could even increase), thus protecting the exposed flesh. This works fine if the body has plenty of resources available during and after the experience. (Under actual survival scenarios such profligate expenditure of resources results in hypothermia and death.)

Well, yes, by several centuries, back when Tibetan Buddhists developed Tummo. Now this guy is rebranding it as the ‘Wim Hof’ method. Is there anything safe from white colonization?

Thanks for the shoutout to my book “What Doesn’t Kill Us”. It has been a wild ride with Wim over these last seven years. At first I thought he was a total charlatan, but when I actually tried his method, it completely blew my mind. I ended up meditating on the banks of a snowy river in just a bathing suit and climbing up a ski slope in the same garb after just a few days of training.

If you haven’t seen it, check out the video trailer for the book: https://www.youtube.com/watch?v=0YeIRMK_pXk

Oh, there’s Eistorte? My granny used to have one in the freezer, but she never needed to meditate to bring it on. But she also wasn’t keen on sitting on it, either.

sees himself out to the cake thread

Why does he feel free to appropriate Tummo from the Tibetans and brand it with his own name? What happened to credit where credit is due?

I’ve done Tummo and the Wim Hof method, and they are pretty different. In Tummo there are a lot of very intense visualizations that take about 20 years to master (if you do it the traditional way), and, in tummo the breath work is more similar to kundalini breathing. The WHM only takes about a week to master, and the breathing patterns are different.

That said, it’s not like Wim Hof invented breathing or ice baths. Pranayama has similar techniques. The Spartans used to use cold water immersion, as do the Russians. At the end of the day it’s all been done before. HE’s just got a unique flavor.

You can buy an App that helps you develop the technique. Be prepared to take a lot of cold showers - and no, that’s not a euphemism. You take cold showers to practice.

I saw the Iceman present his filmed Mark Twain show, and his voice was shot. This must be the reason. hmm.