Hundreds of Americans planted those unsolicited mystery seeds from China

It said China on the package, but…

“Long ago in the Russian hills
A Victorian explorer found the regal Hogweed by a marsh
He captured it and brought it home
Botanical creature stirs, seeking revenge
Royal beast did not forget
He came home to London
And made a present of the Hogweed
To the Royal Gardens at Kew”

They knew, even back then…

If it was a brushing scheme, surely seeds were sent to other countries? Did THEY eat them?!? Or is it the case that only US verified reviews have any value?

That’s the one which can regrow itself from a .7mm piece of root?

I am a seed saver and would happily mail off mystery seeds.

The vice article mentioned mint right after stating that the seeds were not dangerous. Apparently this is not an individual that has ever tried to get rid of mint.

The one thing I used to love about having a mint infestation in my backyard was how nice the lawnmower smelled after running it over.

Apparently this is not an individual that has ever tried to get rid of mint.

We have a bad case of Creeping Charlie in the back lawn. It probably started as ornamental decoration with some plant that was transferred to the garden. 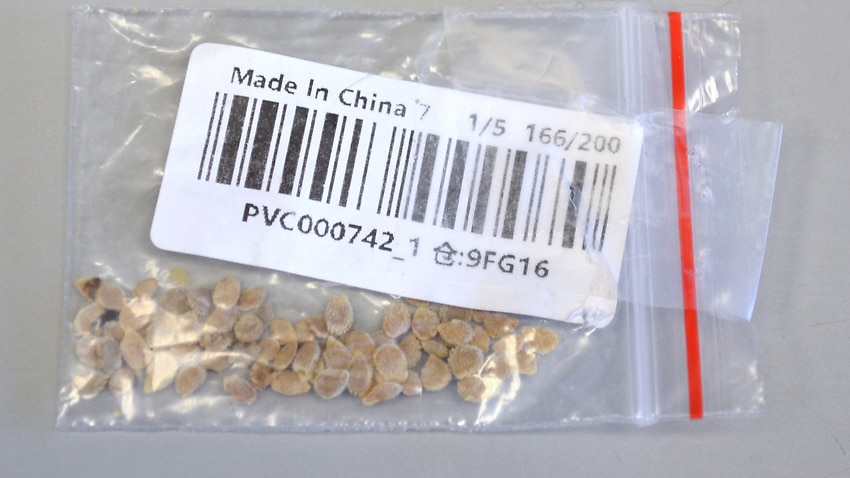 Why are packets of mystery seeds from Asia turning up in Australia?

It's been revealed Australians have been receiving unsolicited packages containing foreign seeds.

That’s the one which can regrow itself from a .7mm piece of root?

There are even worse things:

Bryophyllum delagoensis, commonly called mother of millions, devil's backbone is a succulent plant native to Madagascar. Like other members of its genus Bryophyllum, it is able to propagate vegetatively from plantlets that develop on its phylloclade margins.. Chandelier plant is an alternative common name.[citation needed] This species' capability for vegetative reproduction, its drought tolerance, and its popularity as a garden plant, relate to this species' becoming an invasive weed in place...

Every single piece of these buggers is capable of regrowth, and they’re fragile enough that if you try to pull one out of the ground it’ll usually break into hundreds of pieces.

They’re almost impossible to eradicate; when weeding, you have to treat them as if they were unexploded bombs.

Beyond the seeds themselves, there’s also bacteria, fungi or viruses that may be along for the ride. Fusarium fungi is famously fucking up farming of many folks favorite fruit.

I just smoked the ones they sent me.

Yes! I love edible perennials, but anything that’s guaranteed to come back every year has a habit of spreading. I’ve just had to accept the flowers in the beds that the house came with because they’re impervious to weeding. Kind of makes me wish for the blow torch method I learned in my community garden years ago.

Europe has been drinking Frankenwine since the 1860s.

The Great French Wine Blight was a severe blight of the mid-19th century that destroyed many of the vineyards in France and laid waste the wine industry. It was caused by an aphid (the actual genus of the aphid is still debated, although it is largely considered to have been a species of Daktulosphaira vitifoliae, commonly known as grape phylloxera) that originated in North America and was carried across the Atlantic in the late 1850s. While France is considered to have been worst affected, the...

North American forests have had huge holes punched in the ecosystem.

The pathogenic fungus Cryphonectria parasitica (formerly Endothia parasitica) is a member of the Ascomycota (sac fungi). It is native to East Asia and South East Asia and was introduced into Europe and North America in the 1900s. The fungus spread rapidly and caused significant tree loss in both regions. Cryphonectria parasitica is a parasitic fungus of chestnut trees. This disease came to be known as chestnut blight. Naturally found in South East Asia, accidental introductions led to invasive...

The people sweating over stuff like this, are on the same wavelength as the ones worrying about global pandemics.

I had an uncle with mint in his backyard. He poured everything from clorox to gasoline on it to try to kill it. Eventually he poured concrete over the beds. The mint still came through the cracks. The place probably qualifies as a superfund site now.

Probably a lot of intellectually curios people would actually. Anyone really into plants, botanists, etc.

I believe it is part of a scam that works by giving an on-line seller a delivery notice. I made the mistake of ordering a kayak from a website that had a low low price. I got a notice that my item was delivered and that PayPal was going to release the money to the seller. Only problem was I never received the kayak but also noticed that the item had been sent before I even ordered it. PayPal made my account good but may have sent money to the seller and had to try and get it back. Cost of sending seeds a few dollars but may have gotten $159 for their trouble. Multiply by thousands of possible cases…

I had some unknown vines growing in the back yard mostly up into a tree (although I am familiar with what kudzu looks like at a distance when it covers everything.) A few wacks with the axe and I took it off at ground level and didn’t think much about it. About two weeks later I noticed a new vine growing down the fence originating from the spot I cut the old vine apart at. Another week passes and it’s grown like 10 feet. Another week and it’s like 25 feet long now. At this point point I recognize the leaves and am like, well just fuck this shit.

After 3 spraying with a combination of glyphosate, triclopyr, and 2,4-D plus some more mechanical removal I killed it.

Where I live now has an empty mostly overgrown lot that neighbors me. I noticed a few years ago an attractive purple flower at the far side of the lot during the spring. Now the whole lot is covered.

Wisteria is a genus of flowering plants in the legume family, Fabaceae (Leguminosae), that includes ten species of woody climbing bines (twining vines) that are native to China, Korea, Japan, and the Eastern United States. Some species are popular ornamental plants. An aquatic flowering plant with the common name wisteria or 'water wisteria' is in fact Hygrophila difformis, in the family Acanthaceae. The botanist Thomas Nuttall said he named the genus Wisteria in memory of the American physici...

It’s not as bad as Kudzu, but it ranks right up there with English Ivy in terms of viney plants I despise.

Another old foe from my bush regen days:

AKA “mile a minute”.