I Can Tolerate Everything Except the Outgroup

Basically, the author posits a theory that the two Americas we are talking about are not as metaphorical as we think. Aided by social networking and higher choice for media, we are allowed to segregate ourselves into different tribes. (Reds and Blues at a minimum, and maybe Greys?)

He then muses for a while about how being tolerant to members of the other tribe may literally be harder than being tolerant to other outgroups that are on “our side” (because they agree, their identity has been coopted into the tribe, etc.).

I don’t have the time to finish the long read this evening, so I don’t want to comment yet, but what I’ve read so far makes me agree with you that it makes an excellent basis for what could be one of the best discussion threads we’ve seen in a long time…or many of the posts could become dragon food very quickly.

I don’t know, there are points I can consider in there, but…it seems like these two Americas things (likewise camps or cultures) always try to equivocate away any real points of conflict. In this one you see it start with invoking Eich, who lost his job for his beliefs, despite being a guy “who never hurt anyone”. We are asked to imagine him as like a religious minority, to treat his intolerance as a category like white, and then see how unfair that looks.

But that’s asking to rub off all the context of what had happened. I know people here debated the reaction, but you can at least look at that debate and recognize the actual stakes. Eich never himself hurt anyone, but he wasn’t just expressing an opinion, he was taking actions to deprive other people of rights. Believe it or not, there were actual people who could have been hurt by that, much worse than just stepping down from the privilege of running a company supposed to promote the common interest.

Those people are erased from consideration here, so intolerance becomes just another neutral trait. Taking away any reason why you might object to it, we turn “I can tolerate anything except intolerance” into “anything except the outgroup”, and now it sounds really horrible. Except, as it was put just today…

Just like if you replace “polio” with “Jews” then Dr. Jonas Salk becomes one of history’s greatest monsters.

If we want to have a serious conversation about this, maybe we could start without the pretense that intolerance is just a thing like being white or Muslim, drinking coke or eating arugula, because it’s not. As I’ve been arguing, it only seems like that if you erase the people it affects. Because once you consider them, intolerance is not a neutral thing like race at all, it is something actively hurtful, like racism.

The two Americas dichotomy seems designed to do exactly this erasing. Tell me, between his gun-owning evangelicals who drive SUVs, and highly educated water bottle sippers who drive Priuses, where exactly are the poor black kids getting shot by police? The Native Americans who had dogs sicced on them during a protest? The many LGBT* youths who became homeless for it? Anywhere?

Without them, sure, we can pretend hating opposition to gay marriage becomes the real bigotry; having buried all other kinds, there’s no justification possible beyond just being blue meanies. But that’s disingenuous. America is a lot more diverse than these things pretend. Maybe not everyone sees the other groups – he sure makes it sound like his greys don’t care to – but they’re there. And I think to try and consider this without them is a non-starter.

16 Likes
Generic 2018 U.S. Election Cycle Recycling Bin
President-elect Trump returns to Twitter to lash out at "very unfair" media
If you vote for Trump, then screw you
Trump elected president
Twitterbot catalogs every face in Donald Trump's crowds, looking for humanity
Fareed Zakaria: "Liberals think they're tolerant, but they're not."
Mister44 September 14, 2016, 3:36am #5

I’ll have to read later - probably tomorrow night later. At the risk of repeating myself, I am going to post this again as it out lines some of the reasons it seems various camps are split today more than ever. I’ll try to reply thoughtfully later.

but what I’ve read so far makes me agree with you that it makes an excellent basis for what could be one of the best discussion threads we’ve seen in a long time…or many of the posts could become dragon food very quickly.

I’ve taken the time to go through it and I agree.

People will read this and be annoyed, and if that happens, then the article will have done its job, because it will have pierced its target.

And I have to say, I agree with a lot of what’s being said here. We see an awful lot of virtue signalling on the internet. as well as a strange alchemy that aims to turn social power into political power by running it through self-declared out-group membership, and bypassing criticism by plugging straight into the tribal opposition. 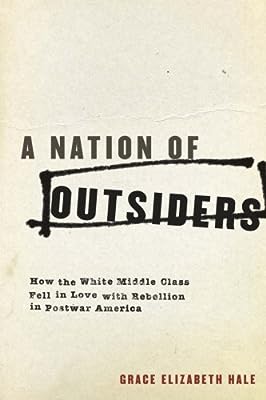 Amazon.com: A Nation of Outsiders: How the White Middle Class Fell in Love with Rebellion in Postwar America (9780199314584): Grace Elizabeth Hale: Books

At mid-century, Americans increasingly fell in love with characters like Holden Caulfield in Catcher in the Rye and Marlon Brando's Johnny in The Wild One, musicians like Elvis Presley and Bob Dylan, ...

I haven’t read the whole article yet either, but a couple of thoughts so far:

What’s the exchange rate on virtue points? The article claims that you get more for forgiving or tolerating gay people if you don’t approve of homosexuality. Is that true? If homosexuality is ok, don’t you lose some virtue points for considering it taboo, even if you tolerate gay people? It seems like it’s better than not tolerating them and worse than accepting them. The greater virtue would seem to be in challenging your views and weeding out the harmful ones. On the other hand, do you get any virtue points for forgiving or tolerating rape (especially if you weren’t the one who was raped)? It seems to me that personal virtue matters less than benefit to others, and we should calibrate our actions in light of that.

The way I read “Virtue Points” is that they would be something that you earn by:

As for whether someone who tolerates gay people despite not approving is more virtuous then someone who unquestioningly accepts homosexually: I agree with you that the important thing is questioning your own values, which is why I agree with the author that the tolerator earns more virtue points than the accepter.

Tolerance is on the path to acceptance, but of you just stop at acceptance, you’ve earned your virtue points in the past and have stopped the self-examination. If you want try earn more virtue points, you have to do something difficult to bring your actions more in line with your values. So, acceptance wouldn’t earn any virtue points, but, say, political activism on behalf of an idea you’ve accepted would earn many more virtue points than even tolerance of something that you don’t accept, because it’s both at a higher level of virtue and a higher level of difficulty.

Of course, all of the above is moot because they never really discuss what “virtue points” are, but that’s what I’d interpret from the idea based on my personal ideas about both virtue and merit (merit being needed because it’s the idea behind “earning” anything, points or otherwise).

Kind of like when a kid says they’re going to give up Brussels sprouts for Lent, instead of – say – candy.

Sounds like my life. I’ll have to check that out.