"I Have A Dream" - Martin Luther King Jr

I sure do get tired of hearing this one speech. As if that’s the only thing the man ever had to say.

Damning myths have marred the holiday to honor Dr. King.

Hard to imagine him saying stuff like this in his time. Of course by ‘hard to imagine’ I mean ‘fucking awesome’.

I sure do get tired of hearing this one speech.

I get what you mean here - that King said a lot of things worth saying that go way beyond that one speech and we should listen to more of them. But as for your literal sentence, I have the speech on my iPod and I actually don’t get tired of hearing it.

One time in highschool I was listening to the radio and someone called in to request “Another Day in Paradise” by Phil Collins for her anniversary with her boyfriend because it was “their song.” The DJ broke his facade momentarily and said, “You know that song is about homelessness, right?”

That’s how I feel when people mention “I have a dream.” Like it’s a pop song and they only know the lyrics to the chorus, and the gloss over stuff like this:

I have a dream that one day, down in Alabama, with its vicious racists, with its governor having his lips dripping with the words of “interposition” and “nullification” – one day right there in Alabama little black boys and black girls will be able to join hands with little white boys and white girls as sisters and brothers.

“Interposition” and “nullification” are words from the “states’ rights” lexicon. Sadly, several parts of the speech are just as relevant today as they were they day he spoke them.

Frankly, I wish we listened to the speech more – as in more of the speech. All we ever hear is the mountaintop part, but he makes amazing points on a lot of issues that are generally ignored.

So I am agreeing with you. MLK Jr. has been pigeon-holed into a race-activist when he was an anti-war, civil rights, religious rights, government reform, and economic activist. He was, in short, dedicated to making the United States a better place.

In this country, that can get you killed.

So I am agreeing with you. MLK Jr. has been pigeon-holed into a race-activist when he was an anti-war, civil rights, religious rights, government reform, and economic activist. He was, in short, dedicated to making the United States a better place.

MLK’s “But If Not” sermon is extraordinarily challenging and inspiring: https://archive.org/details/MlkButIfNot

Inauguration of the Angry Pumpkin just four days after the birthday of one of the greatest American heroes. The irony here isn’t just bitter: it bites. It stings.

It’s as if the ref team has finally managed to get its message across to the blue team.“You want to know how hard it’s been for us, living under the oppressive grip of a black president? This is how hard it’s been! Trump that, if you can!”.

Those fuckers got organized, I have to give them that. They stayed on point, they stuck to their guns in opposing everything Obama did, not because it was a bad idea, but because it came from a black man. RomneyCare became Obama care, and it had to die for that reason.

The bitterest pill to swallow has been the Merrick Garland nomination. Would the red team have been able to block that for a full year, had the president been white?

It’s not clear to me that American people of color have had their lives improve any under a black president. To be sure, the ACA has benefitted brown people as much or more than white people, but this peculiar sense that “racism is over, now that the president is black”, has led to some truly awful judicial decisions. Gutting the voting rights act was the single biggest factor in allowing the Angry Pumpkin to get elected.

I have to wonder if #BlackLivesMatter would have gotten the same traction under a white president. Obama has been so very image conscious, so reluctant to alienate the red team any more than henough already has, I’ve heard nothing from him in support of that movement. Maybe as an ex president he can say things that he couldn’t say before. Like a lot of other people, I sure get tired of waiting.

Tell me again how John Lewis didn’t give into “hurt”, Schneider.

Oh Jesus, when I saw “Rep. Lewis” I wasn’t even thinking about who that actually was. Is Rob Schneider lecturing John Lewis about Martin Luther King?!?

I’m sure we all recognize MLK in the orange box in the middle. That’s John Lewis in the green box on the right. So unless that guy in the red box is Rob Schneider he might want to shut the fuck up.

ETA: White guy lecturing black guy on civil rights is a trope as old as the hills. But the particular instance random white idiot lecturing John Lewis on Martin Luther King Jr. is fucking over the moon.

It’s unfortunate that his speeches won’t be in the public domain until 2038 or so. (Barring another Disney bump.) It was King himself who obtained the rights to his own speech a month after he gave it in 1963, after two companies started selling unauthorized copies.

that guy in the red box

Is the Rev. Dr. Jesse L. Douglas, Sr. He’s still alive, and is active on Facebook

Also, the guy on the far left of the pic is the Rev. Ralph Abernathy. I’m vaguely ashamed that I do not know who the man to the left of Dr. King in this picture is.

Over the last six months or so, I’ve been thinking a lot about nonviolence, what Ghandi meant by it, and then what King meant by it. I find myself more interested in the shape of the ideas, than the poetry of the speeches. In fact, the melodic tonal qualities of his way of speaking, are kind of hard to listen to. I’ve a much easier time listening to Neil Degrasse Tyson’s cosmos singsong or Obamas halting, carefully chosen one at a time cadence, than the traditional black gospel voice of King.

TL;DR: It not the performances or the written form of his speeches I find important or interesting, it’s the ideas they contain. And expressions of those ideas can’t be copywrited, only expressed. Kind of tragic there hasn’t been more such expression in 50 years time.

It’s unfortunate that his speeches won’t be in the public domain until 2038 or so. (Barring another Disney bump.)

Ridiculous, more like. Copyright law is fucked.Even more fucked is the act of proliferating it. 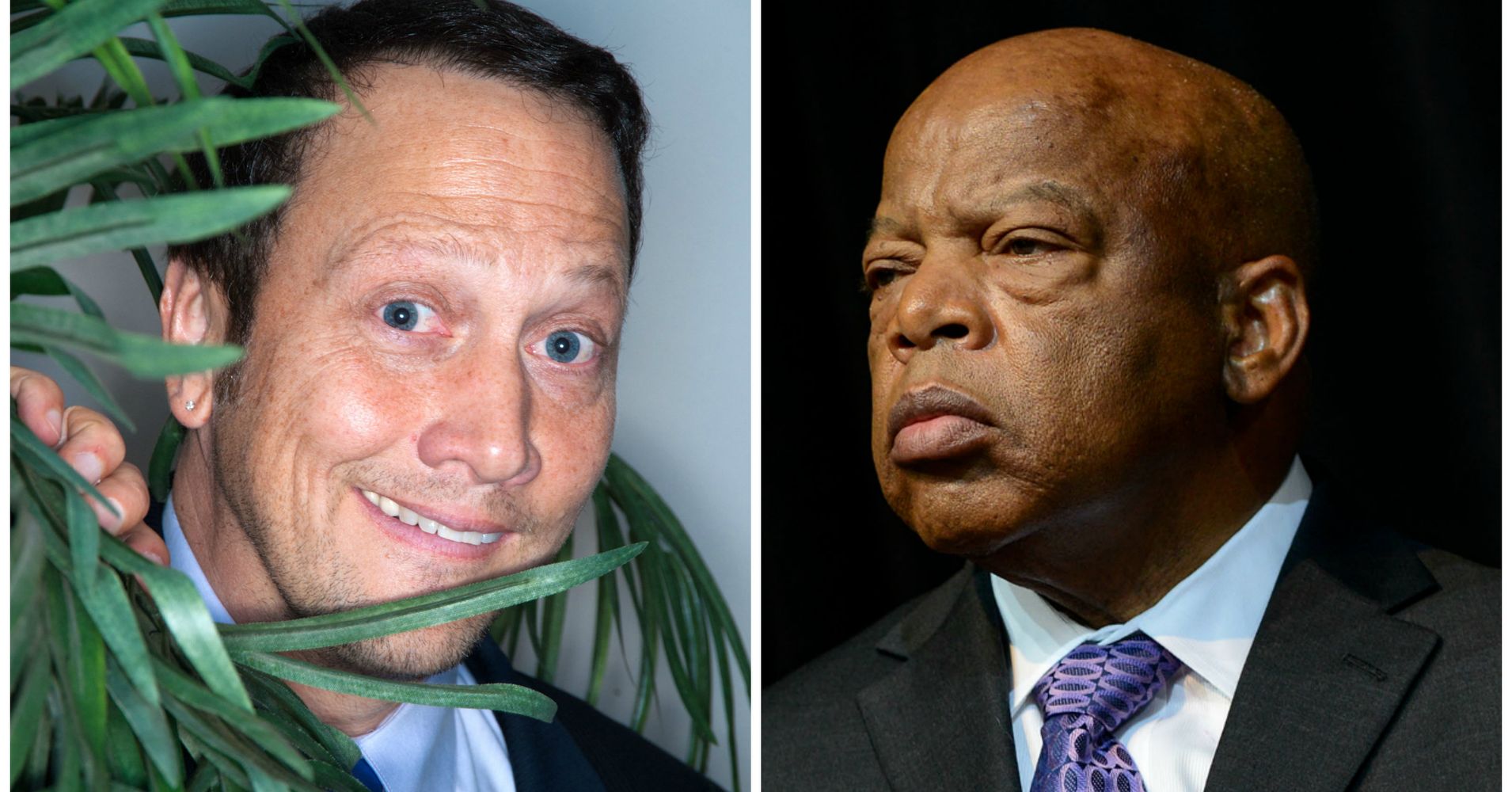 Rob Schneider, Of All People, Decides To Explain MLK To John Lewis

And on MLK Day no less.

Listened to an hour of MLK JR speeches on an NPR show this morning.

My favorite lines are early on. The bad check, returned marked insufficient funds…