because we depend on our phones for driving directions, music, calendar appointments, etc…

You shouldn’t be using your phone while you’re driving, period. Check your directions and your calendar before heading out on the road. And turn your music on before stowing your phone away where it won’t prove to be a distraction.

I just got their bike mount and it’s very impressive: http://www.studioproper.com/products/iphone-bike-mount

Does anybody know whether or not having a magnet that close to your iPhone is detrimental to the phone or your data on the phone?

So far, the only thing that I’ve noticed is that I have to calibrate my compass just about every time. But after that, everything seems to work fine.

Flash memory isn’t susceptible to magnetic fields like good old magnetic media was. During regulatory testing of the iPhone I can guarantee that the device is exposed to much stronger magnetic fields for the immunity testing required.

Or save yourself another $13 and get a generic brand that clips onto your vent: 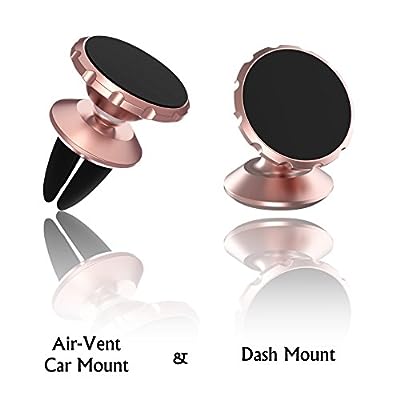 Description: Creative, simple design and high quality materials allows an extensive usage. Does not limit the view and it keeps your cell phone in a perfect position for a handfree phone conversation. ...

I wouldn’t recommend it for an iPod Classic.

Sure, and abstinence works, right?

In general I agree that distracted driving isn’t good but let’s face it, radios still required fiddling and people listening to music from their phone are going to change it from time to time or mess with it, and I’d rather have it up in their field of vision. For directions, having this up and mounted like a gps unit with turn by turn means you shouldn’t be messing with it much anyway - audio cues (I said queues, wtf? I I know better than that)should be covering most of your interaction and again, having it in your field of view means quick adjustments or validations are easier to make and safer.

Should you be browsing your calendar, or texting, or anything like that? No, but I don’t think this sort of hardline is going to do much good either, in my opinion.

Been using Mountek models (CD slot mounts) for about two years now without any problems.

Does anybody know whether or not having a magnet that close to your iPhone is detrimental to the phone or your data on the phone?

I wouldn’t think so. Data, certainly not. Phone itself, also not. There may be some impairment of signal quality, but if the plate does not go into the vicinity of the antenna itself, I wouldn’t consider it a problem.

A possible issue is with the compass, it could be interfering there.

Another issue I’d see is with the NFC coil, which shares the space on the back of the phone. A test is needed here.

You shouldn’t be using your phone while you’re driving, period. Check your directions and your calendar before heading out on the road. And turn your music on before stowing your phone away where it won’t prove to be a distraction.

What about instead push for a standardized set of HOTAS controls, so the basic operations are on buttons accessible without hands leaving the steering wheel, in the same points in all the cars, possibly as an adhesive sticker upgrade? Whether it goes through the CAN bus or a bluetooth wireless?

A standard like that would be handy for both the hardware manufacturers and app authoring.

I’d be tempted to agree with you if all drivers were even a quarter as well trained as fighter pilots, and the airspace the pilots cruised around in was a quarter as congested as a typical road.

Improve either and you get a net improvement.

In this case, the equivalence is all but false; you have a pool of cognitive capabilities of the pilot/driver, and a set of cognition sinks - environment (road, planes…), equipment interaction (radar setting, ewar console, navg/comm, music player), and so on.

Cut down on the cognition sinks that don’t have to be there (you can’t do much with the road, you can’t do anything with the drivers wanting/needing to handle their comm/navg/music gear, so you have to go with the variable you can have some control over - the gear’s user interface. And standardize it across the board, as then the muscle memory will be portable from vehicle to vehicle.

Granted, fighter planes usually don’t operate in congested airspace, but the controls have to be designed for the peak cognitive and physical loads that occur in intense dogfights, not as much for the boring steady-state flights when nothing is happening. Another reason why the analogy stays proud and tall.

the analogy stays proud and tall.

I already know you think that :rolleyes: Everyone who makes a half-arsed analogy thinks exactly the same thing, and they’ll usually defend their analogy to the death. See: above.

and change your underpants, you might get hit by an ambulance.

I already know you think that :rolleyes: Everyone who makes a half-arsed analogy thinks exactly the same thing, and they’ll usually defend their analogy to the death. See: above.

I told you why. I enumerated the similarities. You so far only handwaved that I am wrong.

Prove that I am wrong. Please use actual arguments.

One thing that I find odd is that drivers using GPS or making hands-free calls, talking with passengers, fiddling with their radio and so on is accepted, while cyclists are told that listening to music while cycling is dangerous. You need to have your full focus on the road at all times, so you should have nothing to impair your senses or concentration. That’s fine as far as it goes, but it should also mean that motorists should switch off all radios and electronic devices and keep all windows open when in urban areas. After all, navigating roads requires the use of all your senses, right?

Cyclists with iPods hear the same as motorists listening to nothing

Oz mag set out to find out if "iPod wearing zombies" heard more or less than motorists with their windows up or music playing.

(I often listen to music while on longer rides, and never have any trouble hearing traffic).

I’ve found this to be just as effective and uses suction instead of magnetism and doesn’t require attaching a plate to the back of my phone: http://www.amazon.co.uk/gp/product/B00MIBL7PG?psc=1&redirect=true&ref_=oh_aui_detailpage_o06_s00