In the remastered edition of Witcher 3, you can pet your horse

Originally published at: In the remastered edition of Witcher 3, you can pet your horse | Boing Boing

Aw, that’s sweet. A far better use of technology than the “boob physics” in earlier iterations of the game.

Petting your horse is the right way to show respect in a video game. 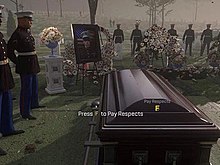 "Press F to pay respects" or "Press to pay respects" is an Internet meme that originated from Call of Duty: Advanced Warfare, a 2014 first-person shooter in Activision's Call of Duty franchise. It originated as a set of instructions conveyed during an in-game quick time event at a funeral service. Widely mocked by critics and players due to its forced element of interactivity that was not perceived to be tastefully executed, the phrase would later become a notable internet meme in its own right....

And Good Old Games. Seems odd to leave that one out when it’s actually owned by the company that made the game.

Buy a game I already own again so I can pet my horse? I’ll pass

I don’t know about the other platforms, but at least on Good Old Games, the upgrade is free. You might want to check your copy and see if a multi-GB update is available. In my case it’s a great reward for my extreme procrastination in getting around to actually playing the games I buy.

Ah, yes, the 40+ gigabyte download aimed mostly at a console I don’t own that just clogged my internet pipe last night. Not everyone has a high-speed connection, and this one is more than twice the “high-speed” allotment I get from my provider for my cell, which is what I usually use. That’s a 99+ hour download, assuming it doesn’t abort and restart multiple times, so I’ll go leech it off the library or similar next time I want to play the game.

For all that it is one of my favorite games, I just feel updates of this size are problematic – you know that in a few days or weeks CDPR will probably issue another update in the form of a patch the same size, and another a while after that one as the critical bug reports come in. I can wait, it is not like the game is unplayable as is, but for what? Graphics that are only relevant if you have the bleedingest of bleeding edge gear, petting a horse you call 'Roach," and a bunch of mods that probably induce more bugs than any potential enjoyment thereby derived. And, despite this download being larger than the data on the disc, you will still need the disk in there because of course you will.

As for being free – well, I pay for my bandwidth, and this is going to suck up all of it for a very long time. To me, that isn’t free, especially as you know that 99% of that patch is just the same old code as you already have, when just a little a bit of effort on CDPR’s side could have knocked it down to just the relevant bits for a particular platform, a few hundred megabytes at most for a last-gen console.