Infographic of the world's $104 trillion economy

Cool! This makes me curious to see how this breaks down based on trade agreements and political alliances, rather than just geography.

These comparisons of economy using USD as the unit of measure makes sense on some levels (it’s the most commonly used currency for int’l trade), but I wonder how much these values are affected by the varying useful value of the dollar for consumers in each country. For example, in the US, $50k USD/year gives you a lower-middle-class, but not necessarily poverty-stricken lifestyle in much of the country, while in other countries it might have you living an upper-class lifestyle due to a variety of factors. I realize this is a very complex thing to evaluate, but I imagine that somebody has done this comparison before? Or maybe they already are taking this into account somehow?

Indeed.
Not every country is able to fight imperialism as well as they do.
Venezuela has vast oil reserves and their piece of the pie is so tiny they don’t get a dollar amount and I could barely discern their flag.
Imagine this diagram without US sanctions crushing the opponents of our major corporations and AIPAC.
If one could quantify the day to day suffering they cause to children and innocent citizens, this diagram would be more revealing.

I think what you are suggesting would be a very different infographic. If I understand you correctly then you are speaking of Purchasing Power Parity (PPP) i.e. ‘How will I fare with a hundred bucks in this country as opposed to in that country?’. A typical example is how much better off the Chinese are when you make comparisons using PPP instead of GDP, the latter measure being the one that Mark’s post is about. But to make the PPP line of thinking work you’d also need to drill down to a per capita level as well if you want to make a fair comparison. There are fewer Canadians sharing Canada’s total output than there are Nigerians sharing Nigeria’s total output.
At this point, when you are looking at PPP and individuals in each country, it may become tricky to visualise these sizes in relation to the global total GDP of 100 Trillion which is the outline of the infographic in Mark’s post. So in summary, I think your thinking would be best solved with a very different infographic altogether.

It would also help to include the populations of each country and their current Gini Coefficient scores.

Things that surprised me:

An Ukraine’s is tiny. So small that it doesn’t get a country abbreviation and you can barely make out the flag. (I think it’s the little one to the right of Russia?) It has a large population between Spain’s and Poland’s so I was expecting it to be more visible.

Thank you, PPP is exactly the term I’m looking for. You’re definitely right, it would be a different chart altogether, but I guess I’m the sort of person who is never satisfied with a single interesting infographic, ha.

It’s not the size of your GDP that matters, it’s what you do with it.

But seriously, I’m amazed at the lack of critical thinking about what GDP actually represents. The entire ruling class, along with virtually all of the media, accept these numbers as if they represent something really fundamentally important about the world. They don’t. GDP is simply a measure of how fast money flows from one pocket to the next. If you suffer from lots of natural disasters and terrorist attacks, and have to spend huge amounts of public and private money to repair things afterwards, your GDP goes up. But if people help their neighbours in times of difficulty, it makes no difference whatsoever to GDP. If you make lots of products that are shoddy and breakdown and have to be thrown out and replaced rapidly, your GDP goes up. But if you make things that are designed to last, your GDP goes down.

I hope you make an Infographic like the one you describe here. I would love to post it.

And Russia wants to keep them that way. How embarrassing would it be for Putin to see a South Korea-style renaissance on its southern border, eclipsing its own anemic economy.

I like it. Really large numbers are hard to visualize. I also like the billion dollar gram for understanding the relativities between various economic activities. 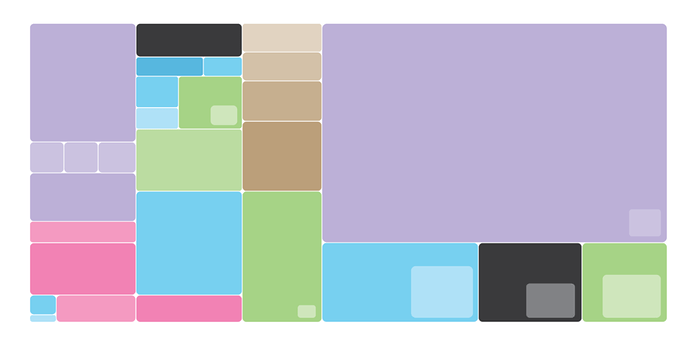 This circular graphic with irregular infilled shapes is much less useful than a histogram. Some of the areas are so small they can’t be labelled, the fonts are all over the place. Ugh! It’s pretty, but as an aid for understanding, it’s garbage.

I blame David Mc Candless’s ‘Information is Beautiful’ for the explosion in pretty but useless graphics.

I must admit I much prefer Edward Tufte’s approach, but do see the benefit in more “arty” presentations in making data approachable, even if it limits scope of interpretability.

This point really drives home the ‘China Quality’ meme and how the entire country has been pushing so hard to more or less artificially inflate their GDP by just building building building and exporting masses of cheap poorly made goods. It’s no wonder their GDP is set to exceed that of the US, they’re focused on that goal to the detriment of all other factors.

The Ukrainian GDP halved between 2013 and 2015 and in 2021 just barely recovered. (According to World Bank)

I took a 1 day live course he was doing on his approach to presenting data. It’s great for letting people get a lot of info from graphs they can pour over at their own pace, and I want more of those kinds of graphics in my life and in the world. But, it’s absolutely terrible for presenting specific data in the course of the flow of an article or presentation. In the course he was clear (and fundamentally right) that guided presentations have a terrible data rate for conveying information. Slide decks with talk tracks are not a good medium for the kinds of data Tufte’s best figures show.

Unfortunately most people don’t have the luxury of telling their bosses and clients and readers “Don’t show up to this meeting/read this article without spending the time to stare at this chart in advance for as long as it takes to understand.” Also, his own live presentation in the course was pretty terrible, since he doesn’t have a solution to that problem either.

It’s not the size of your GDP that matters, it’s what you do with it.

I know you said that half-jokingly, but that was my first thought upon seeing the chart. I’m a USian and thought, “lot of good it’s doing us.”
We may have had the highest GDP for a couple centuries, but since we’ve gone full in on the “punitive, extractive” economy, instead of building something wonderful, we’re just destroying all the wealth.
Sorry. I’m even bumming myself out.
Humans are amazing. People suck.

“How small Russia’s economy ($1.8 trillion) is in comparison with the U.S. and China.”

And don’t you know, that is why Italy with a $2.2 trillion economy should be considered a greater risk to the US than Russia. Well, at least according to Tucker Carlson.