Inside airlines' "snuggle class" for couples

“Snuggle Class” meant something completely different back when I was youngster.

What happens during turbulence? Do folks just strap themselves to the bed?

Also, I hope those mattresses are foam that floats in water in the event of a plane crash. Hopefully big enough to include Jack Dawson instead of letting him drown.

“Snuggle Class” because “Mile High Club” was too many words?

Do folks just strap themselves to the bed?

Now things are getting interesting…

Srsly, though, I am also curious about safety. I’ve only ever flown economy and they always make sure we’re strapped in. I never thought about the issue with the beds. If the captain puts on the fasten seatbelt sign, I can’t imagine they go around waking up everyone in first class to make sure they’re strapped in.

The airline version of soaking?

Do folks just strap themselves to the bed?

The last time I flew transAtlantic in 2019, I bought the (highly discounted) upgrade to Business Class at check-in on the return flight for the lay-flat seat. And, yes, the flight attendants did ask that I keep the seatbelt loosely fastened while fully reclined and attempting to sleep. The belt rested over my hip bones and was loose enough that I could roll over; I did manage to sleep some. I suppose it would have been enough to keep me from launching to the ceiling if we had hit turbulence, but happily I didn’t have to test that theory.

Great- more things the 1% will surely enjoy and the rest of us will never see.

Given the amount of space allotted pasangers in economy, it seems that could be more aptly named snuggle class.

It’s the high-price version of cranking.

I suppose it would have been enough to keep me from launching to the ceiling if we had hit turbulence, but happily I didn’t have to test that theory.

Mile high club? I can’t even get into the sea-level club.

A lot of airlines are discontinuing first class entirely (only a handful of legacy carriers still offer it) while beefing up business class and introducing premium economy class.

In other words, business is the new first, premium economy is the new business and economy still sucks.

Would 20 ft up still count? 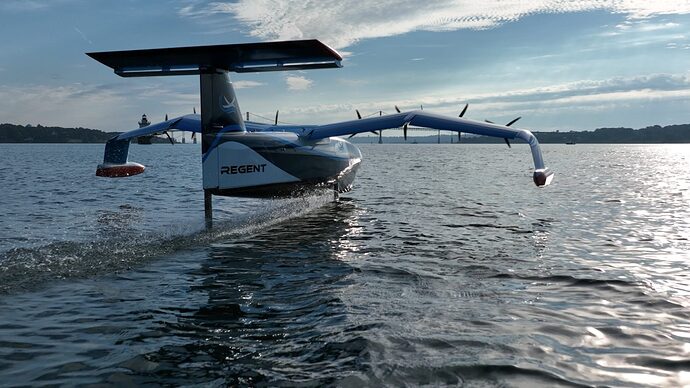 A different sort of electric aircraft has been quietly undergoing flight tests—and sea trials—for a month and the company behind what it calls the seaglider is convinced it’s the future for regional flights in coastal areas. REGENT’s proof-of-concept...

Ah yes, ground effect aircraft. They are the rigid airships of airplanes. Meaning, every 20 years or so, someone decides once again they are a great idea we’ve all somehow missed. The Russians ran huge ground effect cargo planes for a while, until they all crashed and sank.

Why? Because it’s a dangerous, unstable state. If something goes wrong, you’re 20’ off the deck, no margin for error. Furthermore, weather has to be perfect.

If the slightest thing goes wrong, everyone dies. It’s just not a good idea, despite how neat the physics of it are.

I think you’re right, and I remember the first time I read about them in a physical copy or either Scientific American or Popular Mechanics or whatever back in the 90s.

That said, once in a while one of these kinds of ideas really does work out even for things that have been tried a thousand ways and failed. To stick to an aviation example, quadcopters were first tried pre-WWI but never worked well. It took until the 2000s for drones to start working well enough to be useful.

For sure! There can always be a new niche for things, and sometimes there’s just one piece missing, like high speed PIC controllers for quadrotor aircraft.

Another interesting case is the V-22 Osprey. By all accounts it was a boondoggle that should have been ended in R&D a dozen times. A lot of people were killed testing it, even. Yet they kept at it and it is now apparently an incredibly reliable and useful machine in modern deployments. Whether it was worth the lives and cost of development is a harder question to answer, but the technology did work in the end.