Is hooking up feminist?

I suppose the behaviour could definitely be viewed as feminist in the sense that:

1 - Most guys engaging in such behaviour are proud, not embarrassed of it, and
2 - I’ve personally heard more than one misogynist tell me that liberation of women would lead to exactly this behaviour.

If you are going to free people up to make their own choices on sexuality, then absolutely women should have the same choices as men in this regard, and that’s entirely separate from any discussion on whether or not the culture itself is a positive or negative one.

It’s looking pretty good for hooking up being feminist, at least in terms of doctrine. In addition, hooking up rejects the base patriarchal views of sex that traditionally reduce a woman’s agency.

As to the issue of not…

valuing the things that we define as feminine

I’m unclear as to how a woman making the choice to hook up is still considered “masculine” in 2017 or worthy of a reward for breaking a (toxic and outdated) stereotype, at least outside the realm of religious fundies.

I equate that with “be more feminine, guys.”

No, I would not. There are cultural differences, and skin color differences, but those differences are relatively superficial, in comparison to the fundamental biological polarity of sex.

I dunno, and it’s not my place to say based on my gender identity.

Oh look, a thread about feminism where the only commenters (up until now) are male.

So, just throwing this out there, I know it sounds crazy, but is it possible that college women are having sex just because they like to have sex?

Oh look, a thread about feminism where the only commenters (up until now) are male.

Well to be fair statistically that’s going to happen here anyway. As with any of these posts the mods will be watching to make sure that the less-represented gender’s opinions, when they arrive, are not unduly dismissed.

Unfortunately so far the only apparent female to post aside from the author showed up to snark rather than give their opinion, however.

as long is consent is respected and everyones being ethical, i could give a fuck!

American attitudes about sex cannot be seperated from the larger context of American Culture, which simply does not treat women as well as it treats men. If that is the point that the author is making, fine. Otherwise, I don’t see the utility in asking such a question.

Unfortunately so far the only apparent female to post aside from the author showed up to snark rather than give their opinion, however.

I’m sick and in a shitty mood because my country can’t seem to stop self-destructing, and the bad news just keeps on coming; you’ll have to forgive me if I don’t feel like pontificating on this subject yet again for the umpteenth time when I already know all too well how these discussions go.

I listened to the podcast, but I haven’t read the book (and I’m decades past college). Feminist or not, the “hook-up culture” as described here sounds bleak as hell. It’s not about wild, uninhibited sex. It’s about a rigid system of deliberate joylessness, where emotion is practically taboo. Women hook up to improve their social status, and they’re penalized for displaying any sign of affection. The men are likewise penalized, but they’ve already been trained to associate emotion with weakness.

I can’t listen to the podcast at the moment, but I wondered what solutions or remedies the interview offered, if any?

So part of the reason we see hookup culture on college campuses can be traced back to the sexual revolution and the women’s movement.

Worth mentioning that the gender balance on college campuses is shifting wildly, in “favor” of who is debatable, but lots more women, fewer men.

It tends to have a dramatic impact on campus culture 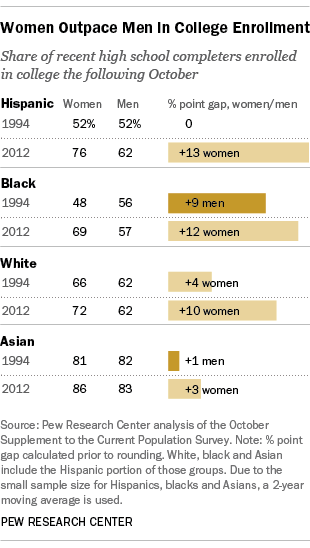 Even though college enrollment rates among young people have risen in recent decades, a Pew Research Center analysis of U.S. Census Bureau data shows that females outpace males in college enrollment, especially among Hispanics and blacks.

The rate of change is also increasing!

Scary consequences in terms of the future though. Angry poorly educated disenfranchised white men are a troubling group.

There are cultural differences, and skin color differences, but those differences are relatively superficial, in comparison to the fundamental biological polarity of sex.

Sure, but the changes that we are trying to make are cultural differences, not biological. I think the analogy works. That is unless you are arguing that ovaries somehow make women less capable of being, say, an investment banker.

Yes and no - Fighting for the actual rights and emancipation of actual women is feminist. Breaking the patriarchal control of reproduction, social norms, and expression is a significant part of that.

But I would argue that dwelling upon which characteristics or attitudes are stereotypically masculine or feminine is a regressive waste of time, and IMO counter to feminist ideal and praxis. Freeing people from the cultural baggage of expectations and gender roles seems to me incompatible with merely trading or re-assigning those roles. It means doing away with stereotyped behaviors and their reflections in our institutions.

ETA: When I say “actual women”, I don’t mean that in a TERFy way. I meant actual as opposed to merely stereotyped femininity.

Does it matter one way or the other? Like, are glaciers good or bad? Do potatoes exist? How would a baby seal eat a Big Mac?

I feel a sudden uncontrollable urge to read three Atlantic thinkpieces on ALL those topics.