Is this the world's oldest, simplest chair design?

That one with the curved back looks cool. I wonder if it’s comfortable. And I wonder if I’d be remotely capable of getting up out of it.

Even older than that

Exactly. The idea that it is the simplest presupposes the existence of the dimensional lumber that it is made from.

The so-called Viking Chair design actually has a scaling flaw that some designers have figured out how to get around:

“The chairs are usually very small and the seat is very low. After the first sketches, I noticed that it is not possible to enlarge the chair, because the wood of the seat is then extremely far backwards and the chair would occupy a lot of space. This problem was solved by bending the wood.”

But at the expense of the original design concept based on the idea that Vikings used them on ships.

“Unfortunately, the chair has lost the original advantages of this chair concept through the bend. The chair is neither space-saving, nor easy to transport.”

I feel like I need to draw a paleolithic Ikea set of instructions for using a rock to sit on.

An Ikea chair that was as comfortable as a rock.

'Vilbert' chair designed by Verner Panton in 1993 and manufactured by IKEA. The chair was taken out of production due to a lack of interest and only 3000 chairs were produced. It consists of four MDF boards coated in melamine.

Even older than that:

ding ding ding
that there’s gotta be the winner.

Even older than that

Had some side-effects though.

That’s got to be right, because NOTHING is older than dirt!

A pal of mine had one of these that he had picked up in his travels in Africa. I sat on it for hours and it was surprisingly comfortable.

Just sit on whatever happens to be around and call it “chair”. Boom, done.

We love a good stool – they’re a smart little style statement that needn’t break the bank. What’s more, they’re useful in countless ways. Think breakfast bar stools for perching in the kitchen with family or colourful plastic stools, like our Tam...

or even that one 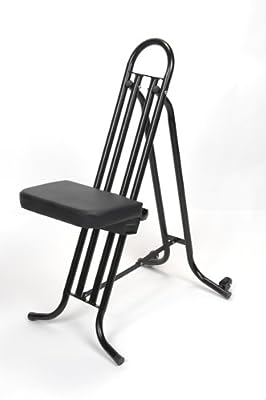 ADD SOLID COMFORT TO YOUR OBSERVING SESSION Every astronomer should have one of these! The deluxe new observing chair from Sky-Watcher is a lightweight, rock solid platform featuring a height-adjustab ...