I saw them at Six Flags over Georgia on this tour in '88, with OMD opening. One of my most treasured concert memories. Gahan was on FIRE.

How did you not mention one of the main geniuses that was the architect for their sound for the next decade or two. Andrew Wilder???

A huge chunk of this album’s sound came around because Martin L. Gore saw Einstuerzende Neubauten in concert and their percussion style blew his mind. Those loud discordant beats at the start of People are People were recorded by running rocks down pipes and then filtered through a drum machine.

"Something has to come last, and what better than the first time Depeche Mode tried Industrial? Inspired by Einstürzende Neubauten, they decided it all meant moving concrete slabs and hitting pots. 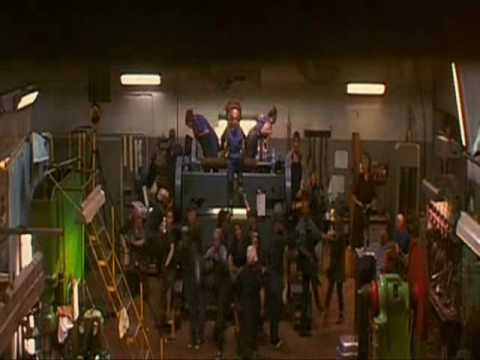 saw them at Six Flags over Georgia on this tour in '88, with OMD opening

Same, but at Six Flags over Texas.

ETA:
I wasn’t really a big DM fan; I had really gotten into OMD’s Organisation which I guess was 8 yrs. old at that point. It was the only time I ever went back to SFoT after working there a couple of summers before that.

But Construction Time Again was my favorite DM album. I am fairly certain that “Everything Counts” got some airplay on the (otherwise) Top 40 station where I lived (KEGL) (i.e. when the song came out; I didn’t pick up the album until ‘87). I’ve long thought that the best era of Top 40 music during my adolescence was 1982-83. But lately I think this had more to do with who was in charge of programming at KEGL than what was actually a hit or not. For example, “Everything Counts” was #17 on the dance chart but wasn’t in the Hot 100 at all (according to Wikipedia). Missing Persons’ Spring Session M was 17 on the album chart, but I didn’t know until recently that they didn’t actually have a song in the Top 40 (“Words” & “Destination Unknown” both reached 42). But they were pretty popular at my school in 7th grade and they were on the radio a lot. That might have been due to MTV, although our neighborhood didn’t get cable until the summer of '83. Similar with Yaz(oo) - none of those songs were Top 40 hits - not even close, though they were dance hits & Upstairs at Eric’s did well on the R&B chart - but I definitely heard them on our Top 40 station. Same with Yello; they played “I Love You” quite a bit.

I wondered at the time I heard “Pipeline”, if that’s where they’d gotten the clangs etc. By the time I bought Construction… I was already listening to EN, though I didn’t realize until later that both groups had Gareth Jones as a producer (EN’s Halber Mensch). What’s funny is that a friend said “industrial music” referred to DM e.g. on “People are People” but not to EN (nor Skinny Puppy etc.). For me EN’s Drawings of OT was their high water mark & I began to hear it (and the live 2 x 4) less as “industrial” (it doesn’t remind me much of, say, Throbbing Gristle) and more as (very) avant-garde world music. That said, probably an unpopular opinion, but "People are People " always kind of annoyed me.

And on a side note, Jones also produced Wire’s Ideal Copy which I listened to a whole, whole lot in '88…