oh hell yeah. we are all walking around in a sci fi movie right now

Came for the walking. Left unfulfilled.

But I am impressed by the acceleration of the leg parts. They get up to speed nearly instantaneously! This bodes well for its ability to deal with the complexities of walking motion.

Another video linked to in the Pop Mech article shows a closeup of the hand guts. It’s driven by a bunch of servo motors. Should be interesting once it all gets moving.

It’s on a permanent support, and will never walk free by design.

Dude. Gundam is not Voltron. The torso may or may not turn into a shuttle craft though depending on the year.

How is this thing funded? The costs must be astronomical… I would estimate at least 3 million euros. I can imagine it is an actual R&D project with research goals for big scale robotics.

Too bad it’s not Boston Dynamic behind this. Then it would be interesting.

Waiting for the news that a Musk fan in a…Pod? Orb? It’s a round escape/ life support pod…stowed away on the UAE mission to Mars. Maybe they can pull a real feature jump and launch funnels from it to start farming ahead of time. And growing that (what, beryllium-loving? No, just works on cosmic rays.) mold that absorbs radiation on the cladding. Gonna need those GI Joe tentacle plants.

Something about square - cube law and its relationship to building giant robots springs to mind.

I don’t understand the subject line for this post, considering that no actual “walking” has occurred yet. The description in the original Popular Mechanics article is about right:

Mostly it seemed to be checking its fly.

But I am impressed by the acceleration of the leg parts. They get up to speed nearly instantaneously! This bodes well for its ability to deal with the complexities of walking motion.

It’s on a permanent support, and will never walk free by design.

You’re probably right, but I’m having trouble finding any English-language sites that confirm whether it will really walk free. Most of them just reference the Popular Mechanics articles, which clearly do describe this as a real walking robot. Here’s another article:

the bot will tower nearly 60 feet tall and feature 24 degrees of freedom. So yes, this thing will be able to walk.

Masaki Kawahara, lead designer for the Gundam robot, has some serious chops as this is the fourth time he’s built a life-sized Gundam. While some of those, including the current statue in Tokyo, are taller than the forthcoming humanoid robot, none of them could walk.

The good news: Based on a simulation from the University of Tokyo’s JSK Lab, all the design work looks promising from a technical standpoint. At least in the confines of the simulation tool shown in the video above, the enormous Gundam can successfully walk.

Maybe the writer of these articles just didn’t do his research, or was misled by the builders.

The various Gundam franchises pull in hundreds of millions of dollars per year. They can afford it.

Even so, it’s still got potential! Looks like all it needs is to be bolted up to an enormous rickshaw with a power unit built in and it could walk like Lucky the Dinosaur. 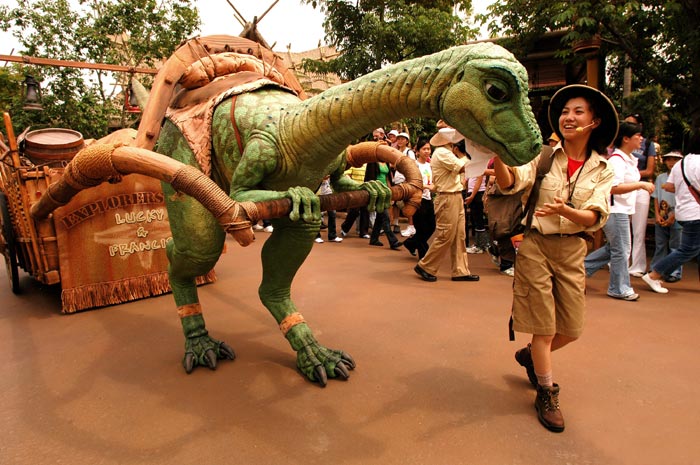 Lucky the Dinosaur was an approximately 8ft-tall green biped dinosaur of unknown species which pulls a flower-covered cart and is led by "Chandler the Dinosaur Handler". Lucky premiered at Disney's California Adventure and came to the DinoLand U.S.A....

Definitely a lot more then I expected… I guess on that kind of revenue your marketing budget can include making life size mecha animatronics.

Then it would be terrifying. Based on how terrifying all of their products/projects so far that I’ve seen are, and I can only imagine what they do for the military-industrial complex.

I wish I didn’t have such a good imagination sometimes.