I claimed no such thing. I am merely trying to understand how such a thing is so entertaining to many. Aka, please explain the joke to me.

But thanks for being a sarcastic dick to me.

But thanks for being a sarcastic dick to me.

That “thanks” looks pretty sarcastic to me.

None intended. I was being quite honest in that thank you. I am however actually a bit butt hurt over Mark stepping down to such a childish level.

So who ever is responsible, put me on the list. I am disappointed.

With me it’s not so much entertainment, as it is a sort of exegesis of their many layers of symbolic meaning.

Even if that analysis is rather pedantic and immature?

Exclusive patent rights leveraged by Delos to VC and lock up all AI advances that come along? It is a dystopia.

I’m enjoying Westworld (moderately… I’d rate it a solid B/B+ but definitely not an A), but I’m having trouble grasping the point of the show for rather different reasons than those laid out in the video.

The theme park in Westworld seems pretty squarely aimed at misogynists and would-be tough guys, not women or families. I’ve only noticed one female guest so far, and she was a lesbian with a bit part, as if to establish that no, not all the guests are male douchebags, psychos and that one sensitive guy who doesn’t really want to be there. (There may however have been others I haven’t noticed.)

I find this unsettling. Presumably the target audience for the show is not the same as the fictional target demographic for the theme park. (I sure as hell hope not, anyway.) So what is the point of Westworld, the show? Is it a PKDickish exploration of what it means to be human? Is it a hamfisted lesson in the evils of misogyny (while blithely wallowing in its own apparent misogyny)? Bit of both? Something else? I confess to being somewhat baffled, yet not very interested in digging too deep for answers. Maybe because I’m afraid of the answers, or maybe because I’m receiving it more on the level of a Hollywood blockbuster – fun, but essentially empty entertainment – than the Very Serious Television it is apparently meant to be.

None intended. I was being quite honest in that thank you. 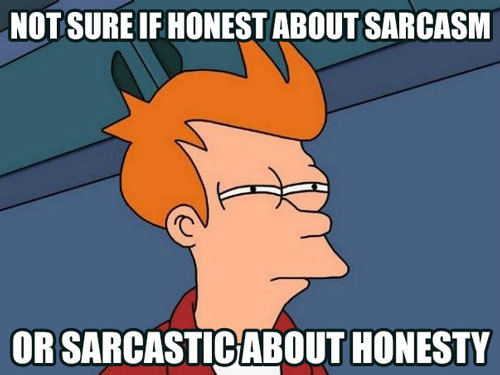 Just kidding, I had never seen her videos before. I don’t have much of an opinion either way. It wasn’t insightful, but was cute enough that I don’t feel that I wasted the two minutes or whatever. Since I don’t have meatspace friends it can be nice to get some feel for what others are seeing in media that I enjoy - even if it doesn’t ultimately speak to or inspire my views.

The theme park in Westworld seems pretty squarely aimed at misogynists and would-be tough guys, not women or families. […] I find this unsettling.

Probably the best lens to understand this through is “Westworld is a meatspace version of an MMORPG” rather than “Westworld is Disneyland with Cowboys.”

PKDickish exploration of what it means to be human?

I think that in a very Dickian way it’s AI functions as a sort of allegory about how human individuals, their roles and relationships are programmed by processes of socialization.

But is there dick.

HBO has a fake marketing website for park guests.

Thanks couldn’t remember it offhand. Here’s the part where the Q&A addresses guns: 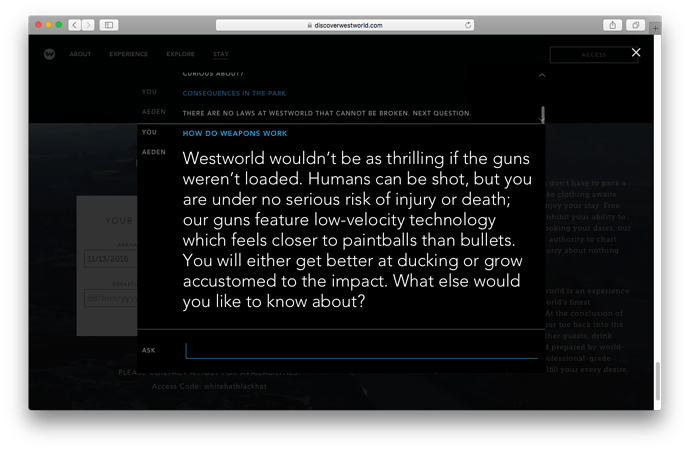 Thanks for posting this, I enjoy the show but I find this video parsing its ridiculousness really funny.

It’s kind of like what I would have liked to have role played with my mates when ripping into the show fairly affectionately.

Were I much funnier.
Younger.

And if I had friends. Or at least ones I met the odd time.

Just wanted to post a dissenting voice: I found this funny and clever.

Exclusive patent rights leveraged by Delos to VC and lock up all AI advances that come along?

It’s hard to imagine the IP laws getting so far out of hand that one company had the exclusive legal rights to 3D-printing of robot vaginas.

It’s fiction and the stretch from oligopoly to monopoly might be kind of stretchy. It hasn’t been a specific plot point, I guess.

Yet bio-synth robots and smart bullets are just fine, but this is where your suspension of disbelief resides?

the future where both patents and copyright are forever