In regular capitalism, employees often suffered because of the dictum “the customer is always right”. In late-stage capitalism they now also suffer because “the thief is always right” – to the point where it becomes unclear if the thief in question is the actual stick-up man or the joint’s management.

I want to think that the public outcry over this will cost this bar at least $4000 worth of profits as people stay away in droves. Probably not though.

I was under the impression this sort of thing was illegal. Employees aren’t liable for robberies unless they’re the ones committing the robbery.

I was under the impression this sort of thing was illegal.

I was too. The second tier thieves in this instance documented and signed their work.

LOL fuck that. I’m not risking myself over your money.

Pinkie? Pinkie swear to pay back all the moneys that someone else stole?

I was under the impression this sort of thing was illegal. Employees aren’t liable for robberies unless they’re the ones committing the robbery.

I’m pretty sure you’re right. It’s illegal to dock an employee’s pay for theft or loss (though that may vary from state to state). I think the bar knew that, too, which is why they came up with this BS idea of having the employee “agree” to pay back the money.

Now, if we can find someone to pay back all the money the bar stole from its employees…

Just move out of Vegas.

What do you want to bet they double-dipped with the insurance claim, too? According to @WedgeAntilles, the employee has a case which might involve discovery that could lead to much bigger problems than losing $3,900.

Looks like he is suing the bastids
An ex-bartender at a South Summerlin, Nev. sports bar/gaming venue filed a lawsuit this week in state court. He is challenging how his paychecks were deducted to repay over $3,900 that he handed over to an armed bandit who demanded money.…

One gaming law professor, Robert Jarvis… agreed that “The Lodge did everything wrong. And Parker did everything right.”…
“It simply boggles the mind that the Lodge did what it did — its conduct is simply outrageous,”…
Jarvis added he was not surprised that Parker turned down the Lodge’s $5,500 settlement offer. If the case goes to trial, a jury is going to be very sympathetic to Parker, Jarvis said.

If I were advising Parker, I would advise him to hold out for at least six figures,” Jarvis suggested.

It is, of course, horrible. But it’s ragingly stupid from a purely transactional view of it. Imagine the liability if the next bartender gets hurt, or worse, because they don’t want to risk having to pay back thousands of dollars.

I often counsel clients that that thing they are thinking about setting as policy might some day be described in a sentence that starts, “Ladies and Gentlemen of the Jury…” And if you think that policy is going to sound bad in that context, one really ought to think twice about that policy.

Yeah, if they filed an insurance claim, they’re f*cked.

That poor bartender was literally robbed twice in one night.

This story is a perfect illustration of the fact that wage theft is larger than all other forms of theft, and it will remain so until we change things. Either by changing the law, or by changing who in this scenario gets a gun pointed at them. 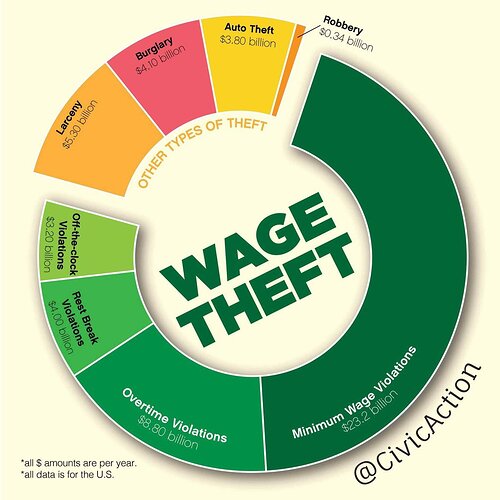 I was in Vegas for a week recently and every local that we met or talked to had something to say about how precarious work or housing was. Every driver we had talked about driving sixteen hour days. Everyone talked about how you could evicted in a heartbeat, even during Covid. Everyone seemed to have a hustle; if they slept, they’d fall behind. Nobody seemed to be from there; they’d just ended up there and had nowhere else to go.

It was a deeply, deeply weird visit. Nobody, residents or tourists alike, seemed to be happy. Just existing. Don’t slow down or you might think about stuff you don’t want to think about. Keep moving. Keep partying. Keep going.