Ah you have to love the Telegraph.

It’s not very British to wander around saying you’re a patriot.

Be patriotic by all means, after all you’ve joined the Army. Standing for the National Anthem is kind of in the job description. But no need to go overboard. We’re not excitable foreigners after all.

The fallout from his trial prompted the Army’s most senior officer, Sergeant Major Glenn Haughton, to record a social media video saying: “If you’re a serving soldier or a would-be soldier, and you hold these intolerant and extremist views, as far as I’m concerned, there is no place for you in the British Army - so get out.” 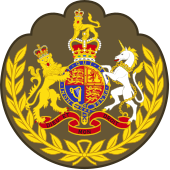 So all the talking heads on fox, most of the high level GOP members… I’m gonna stop right now before I hurt myself.
Also, wish our military was doing the same.

It’s not very British to wander around saying you’re a patriot.

Yes, I always get a bit twitchy about the Last Night of the Proms.

Seems excessive to me.

Let’s not even talk about hugging/humping the flag.

Exceptions may be allowed for sporting events, but only rugby.

Is it intended that it looks like a BINGO-sheet?

“The X makes it sound cool!”

It was produced after four soldiers in the West Midlands were arrested under the Terrorism Act, accused of being neo-Nazis and plotting acts of terrorist violence. Since its publication, other serving members of the British military have been tried and convicted for plotting far-right terror and recruiting others to join far-right terror groups.

Whew! Nice to know that this is not a US problem. Despite a much larger military, we’ve not had any convictions or even arrests for extremism among our troops.

I like “Have tattoos with overt XRW iconography” and “Have extreme XRW group stickers or badges on clothing or personal items”.

I think at that point, you don’t really need a handy spotter’s guide.

It’s actually fairly worrying in that it indicates that simply having XRW views is not intended to be enough to trigger a concern report.

“Refer to individuals ready to challenge their XRW views as ‘indoctrinated’.”

i.e. they have what the observer considers XRW views but reporting is only recommended if there are other factors beyond that.

I was just about to complain that I’ll never get bingo without an equal number of columns and rows.

Yup.
Unhelpful to say the least is no mention of whether we score a line or the whole card.
I’m guessing we shout “WINGO!” either way.

Apparently the official guidance is that the person doing the scoring gets to decide for themselves how many are needed to win.

Could be just one, could be the whole lot.

I expect that Il Douche’s regime will be re-purposing this document as a recruiting checklist for ideal ICE candidates.

Jingo all the way.

I thought it was a new homologated model of Subaru, but that was the Impreza WRX