I just spent an hour replying to a FB post where someone questioned my patriotism (in the context of a kneeling football player). I just thought I’d share:

In a totalitarian state such as North Korea, Stalinist Russia, or Hussain’s Iraq, patriotism is the unwavering respect for your leaders and national symbols; and unquestioning support of the customs related to them. It is standing when you are told to stand, saluting when told to salute, and never, ever asking if those in charge of those symbols are worthy of them.

In a free society, patriotism is understanding the context and meaning of your national symbols, and DEMANDING that they live up to the principles they stand for. It is speaking up for those who do not benefit from the same freedoms you yourself enjoy- Even if doing so comes at personal risk. It is holding your officials, your police, your military, accountable to the laws which they themselves swore an oath to uphold, even when others would give them a pass. It is defending those who cannot defend themselves, and holding your fellow citizens accountable for the unjust actions of your society, even when doing so makes you exceedingly unpopular.

In short, for an American, a real one, patriotism is upholding the values enshrined in our constitution- Even when it comes at the expense of the flag, your security, or a fucking song.

My grandmother’s family was established in New England over a hundred years before this country was founded. We fought in every war from the American Revolution through Vietnam, so that American citizens could speak out against their governmehnt and fight for the freedoms of their fellow citizens. We produced a president who fought to preserve the citizenship of the black Americans he helped free when he accepted Lee’s surrender at Appomattox and ended the Civil War. We have a 400 year history of not only military, but civic service- Producing clergy, journalists, community leaders, social workers, teachers- Who fought in virtually every possible way to make this country better, to ensure that the rights guaranteed to all Americans would be enjoyed by all Americans.

I have a deep seated love for the idea that our founding fathers could combine the best parts of four distinct governmental models into a cohesive and balanced system. I believe wholeheartedly in the inalienable right to life, liberty, and the pursuit of happiness embodied by the freedoms of speech, of religion, of association, to be secure in person and property, afforded due process and equal protection under the law. I understand the significance of Marbury v Madison, of Griswold and Lemon v Kurtzman, of Miranda and Heller, and how those moments secured our rights.

And I will show respect for a symbol, any symbol, that shows deference to those principles- But the moment that symbol becomes a shield for those who would usurp them, then by gods, I will tear it the fuck down and shine a light on them until people can get their goddamned priorities straight.
In the words of Craig Washington, I prefer a man who will burn the flag and then wrap himself in the Constitution to a man who will burn the Constitution and then wrap himself in the flag- Because THAT’S what being an American patriot is.

If you want to strip it down to standing and saluting right or wrong, you’re welcome to move to North Korea.

GJ man. I’ll raise a glass to that.

FWIW, I would probably have been a lot meaner than you. Probably something on the order of: “What’s the point in respecting the anthem and the flag and such when the country is seemingly enshrining principals of destruction and prejudice.”

But you said it a lot better than I would have.

And I will show respect for a symbol, any symbol, that shows deference to those principles- But the moment that symbol becomes a shield for those who would usurp them, then by gods, I will tear it the fuck down and shine a light on them until people can get their goddamned priorities straight. 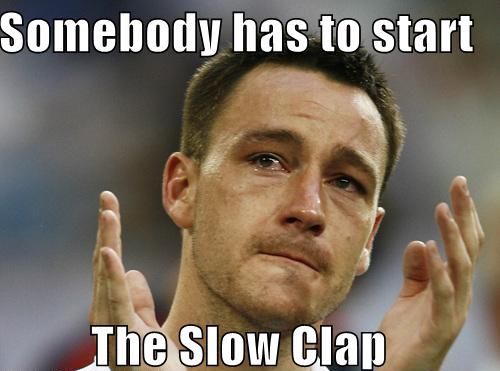 Aside from a select few, my FB has been chock full of people this weekend who thought Iraq was the logical conclusion to 9/11 and that you gaddamn better salute that flag, because why didn’t you serve in the military or fire department like I did?

Funny thing is, I remember being just as disappointed in my classmates during the 70s and 80s when it was the Russkies rather than the Muslins.

This topic was automatically closed after 158 days. New replies are no longer allowed.