LED "clock" spells out the time in words

Reminded me of a wristwatch i’ve secretly wanted for years. A quick search confirmed that this LED clock is in fact a cheap and large version of it. Pretty much an exact copy. However i do like that it’s affordable, unlike the $900 price tag on the wristwatch. 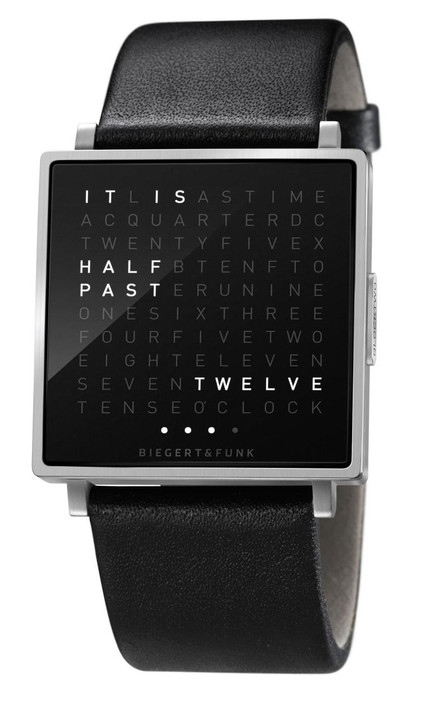 … the “It is” words at the start, which strike me as hilarious, caustic commentary …

Yeah, I immediately thought of Qlocktwo too.

But their clocks are, indeed, tres expensive.

Watches are a curious purchase. There’s a few watches i would love to have and i’ve kept an eye on them for a couple of years now… but it seems odd to spend money on an accessory.

The Qlocktwo was a clock first, before their watch.

I love watches, always wear one, but I don’t have the money to justify buying a really nice one. I am tempted to get an Omega Speedmaster of the requisite vintage for my fast approaching 40th, though.

EDIT: I probably saw it here to start with…

I’m a very practical person so the last watch i constantly wore (and loved) was a Casio watch. Cheap thing but i loved it, wasn’t one of the ones with the calculator in it… the one i had you could make calendar reminders and a contact list with emails and phone numbers. This was before i had a cellphone and found it to be invaluable, and i still thinking about getting one because if i were to ever lose my phone i’d be screwed as far as getting in touch with people.

I love the front, but mang… the back of that thing… hello? why not just throw on some nixie tubes

btw is there an app for that? seems like there should be
maybe someone could google that (for me)

There is a Nixie tube called the B7971 that would suit your needs. I have a Four Letter Word Machine on my mantel that does what its name implies. A longer version with about 20 tubes would achieve the result you seek.

Don’t they say “half ten” in England, while we yanks say “half past ten?” The clock can display either, so I hope it has GPS.

One could just use LEDs to build something similar but honestly nixie tubes are just cool. I suspect this is why they’ve become more expensive as they’ve gone from an old piece of tech to a neat thing for makers to mess around with.

I’ve found that if you say half ten in the US, most people assume you mean 9:30.

It means that in Germany as well.

Also, in the Northeastern US, they say “quarter of”, and I have no idea what that means. I’m a Midwesterner, where we say “quarter to” and “quarter past”.

That definitely looks like a bomb. Fortunately, I’m white.

Reminds me of a DCL script I wrote for VMS when I was about 15. Vague time teller would print out things like “It’s almost half past nine.” I wish I had recognized it as an interest in humanizing the machine interface back then. If I were a programming instructor, it would be an assignment.

“quarter of” is the same as “quarter to”.

There are watchfaces like this for the Pebble Time, but I found I didn’t actually like using them after the first 15 seconds or so.

No use to me, I’ve mild dyslexia and blurred vision when I get up.

I’ve found that if you say half ten in the US, most people assume you mean 9:30.