LegalEagle’s 35-minute tear down of ‘Established Titles’ is excellent

That saves me 35 minutes. I’d guess that the many people who still think NFTs have any value might benefit from watching the whole thing.

This Scotland land thing is such a weird scam that has been going on forever. Every ten years or so another grifter comes along to put a new spin on it, but I remember it from at least as far back as the 1970s.

Why is it always Scotland? Is it because middle class white Americans have a weird reverence for it (rooted in white supremacy) so they’re more likely to be drawn in? Nobody is running this scam with China or Argentina, I notice.

Lord Jedidiah doesn’t even know where Argentina is on a map.

Why is it always Scotland?

While there’s probably some weird white supremacist spin to it, in the end most run-of-the-mill grifters are lazy and lack imagination. Look at the products the MLM pyramid schemes purportedly sell: always the same basic product categories.

Why is it always Scotland?

While there’s probably some weird white supremacist spin to it 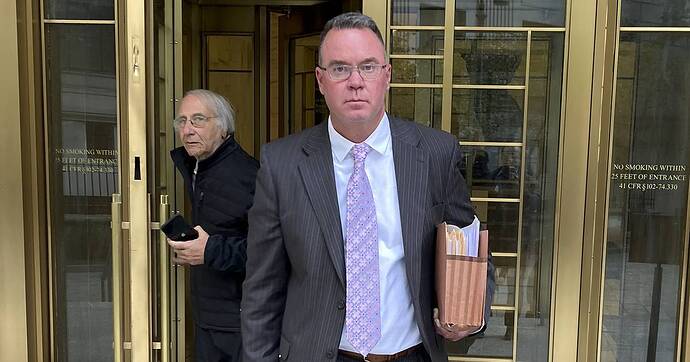 This was Timothy Shea's second trial. The first one ended in a mistrial in April when a juror refused to convict him, citing a government “witch hunt.”

Boy, just when I thought things couldn’t get dumber…

I bought one of these on Groupon during the pandemic. I never, for a second, thought I was becoming royalty or had even the slightest right to put “Lord” in front of my name. Why did I sink my $43 hard-earned dollars on it? Because it totally made me laugh to tell family that my wife and I must be now addressed as Lord and Lady, and then showing the vaguely official looking paper with a seal on it. I have a picture of it on my phone. $43 for a joke…I’ve paid more.

Edit - Oh, I just remember the other reason I bought the ‘title’! I was studying and since finished my Masters. Thus, as I told people, I should be addressed as “Lord and Master”. I found it hilarious.

Did… did you watch the video?

Zombie Bonnie from the Celtic Way in Asheville, NC has entered the chat… 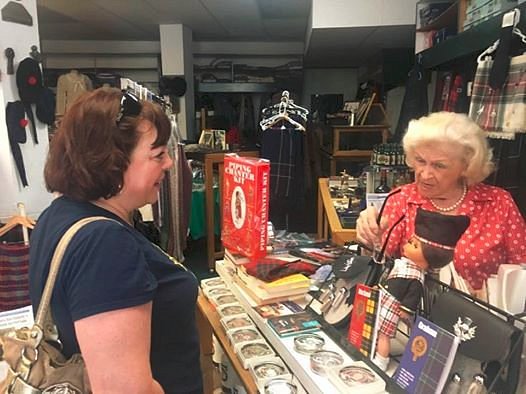 Celtic Way (Asheville) - All You Need to Know BEFORE You Go

It doesn’t even “allow” that. there’s nothing in law about the use of these titles or suchlike. All it is is a bit of linguistic trickery- In Scots, “Laird” means “Lord” in the sense of “Landlord”, and nothing else.

Now there is an actual way to buy yourself a “real” title of nobility, but that’s rather more expensive and involves giving a big donation to whatever party is in power in Westminster, then waiting for the next Honours list.

Indeed, I watched about the first 8 or 10 minutes which was more than enough to make a very strong case that it was all BS, so I didn’t feel the need to watch the whole thing.

Okay so: tl;dw of this whole thing, owning land in Scotland does not allow someone to legally apply the title of Lord, Laird or Lady. Owning a ‘souvenir plot’ of land also does not allow one to do that.

It sounds like the advertisers have done their job.

Owning a ‘souvenir plot’ of land also does not allow one to do that.

Also, you’re not even legally “owning” the 1-foot square souvenir plots and don’t get a deed from the government or anything. It’s a sale under “contract law” which is a different thing than real property ownership.

I’ve always assumed that the people who buy these sorts of things don’t take it very seriously (if owning land in Scotland gave you a title then a large fraction of Scots must be titled if they own a house), much as the people who get stars named after them don’t really expect astronomers to start using the names. But I guess you can’t assume that nobody takes it seriously and so I suppose it worth beating the dead horse for them.

I haven’t watched the video yet so I don’t know if this was covered but I heard a podcast a while back about the “Klondike Big Inch Land” promotion that Quaker Oats ran in the 50s, “deeding” children 1-inch-square plots of Canadian territory. It ended up turning into a legal and logistical headache for everyone involved, in part because some people really did think it was legally binding. (See also: the case covered in the new Netflix documentary Pepsi, Where’s My Jet?) 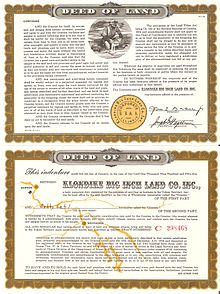 The Klondike Big Inch Land promotion was a marketing promotion run by the Quaker Oats Company in 1955 and created by Bruce Baker, a Chicago advertising executive. Quaker Oats bought 19.11 acres (7.73 ha) of land in the Yukon Territory of Canada for the price of US$1000 and printed up 21 million deeds for one square inch (6.5 cm2) of land. On advice of counsel, Quaker Oats set up and transferred the land to the Great Klondike Big Inch Land Company to make the company the registered owner and ma...

but I remember it from at least as far back as the 1970s.

There were also similar novelty deed things going on back even earlier for land in places as exotic as Tennessee and Texas. The Tennessee deal was tied into the popularity of Davy Crockett while the Texas gimmick was that you were the owner of a one inch square ‘ranch’. So Scotland isn’t the only target of this sort of scammery.