And here she is working hard in a lab.

(not mine, I found it elsewhere on the internet)

That is a large popsicle. I wonder what flavour.

I’m sure you’ll get a few other corrections, but there’s no real reason to refer to the LEGO scientist as a FEMALE scientist…one wouldn’t say male scientist…SCIENTIST will do! Thanks!

PS - is the scientist referred to as a “female scientist” on the box?

If it’s the first one Lego has ever produced, doesn’t that become something of a relevant thing to note? The point of the article isn’t that Lego produces scientist minifigs; but that they’ve historically produced only male scientists.

(As for the box, you can only get it in the ‘Mythical Creatures 2-pack’ along with the Yeti, and the internal documentation refers to ‘lab co-ed’.)

Both are excellent additions to the minifig universe!

Bah, in my day minifigs had one expression and we used our imaginations! Grumblegrumblegrumble.

But then, there are many who will say that it all went careening downhill (well before my time) the day they started including building instructions in the sets.

Yes, there is a reason. I’ve clarified my post. Thank you.

in my underwater lab

THAT HAS COME UNDER ATTACK BY PIRATES

QUICK, WE NEED PILOTS FOR THE MARTIAN BATTLE CRUISERS

So the lab co-ed is as mythical a creature as the Yeti?

I dunno. I’m pleased to see more female figures (and female heads, which is half the battle right there) appearing. I’m hoping that it means Lego may be realizing that creating a separate product line for girls was not only somewhat offensive but Just Plain Dumb. But they do still seem to have some stereotype problems. Waitress? Bavarian lass with giant pretzel?

(Grandma I don’t mind as long as grandpa also exists.)

It is actually just a small Yeti… I am assuming yak or sheep flavored.

Florence flasks are better. Also, there needs to be a twisted tangle of glassware where the center glows “Eat At Joe’s” in the dark.

Yeti - rock on! Chick Scientist - you are fuckin’ kidding me she’s the first one they’ve put out.

So the lab co-ed is as mythical a creature as the Yeti?

My very first thought when I saw this story.

So when the Juno probe gets to Jupiter in 2016 (I note that it’s doing an Earth flyby October 9 2013), will there be reproductions of the 3 Lego figures strapped to it?

Juno is holding a magnifying glass, though it looks kind of like a frying pan, leading me to believe she’s about to wallop Jupiter with it ala Andy Capp’s wife.

These Three Lego Minifigs Are Going to Jupiter

These three Lego minifigs are standing ready to launch inside Juno, NASA's next interplanetary spacecraft. From left to right, they are Galileo Galilei, the goddess Juno and her husband, Jupiter. They will reach the mighty gas giant in five...

You should check out the expression on the ‘hazmat guy’ minifig. Freaking hilarious! 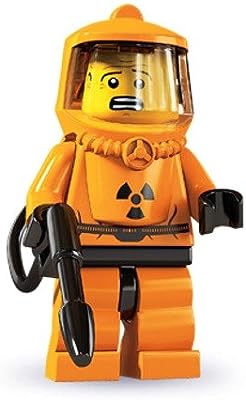