This Department Has Worked ______ Days Without an FBI Visit.

I suppose libraries do have semi-public terminals that are particularly useful for those typically without Internet access, but I would have thought making sure those are wiped fresh on a regular basis is surely common IT sense at this point. (Any such public computer not regularly wiped would quickly be rendered useless, users being users.)

The ONLY reason an FBI agent would go near a library.

But seriously, what we all need to resist is the Texas State School Board.

An informative piece on this issue is here:

The Revisionaries | Texas Board of Education Textbook Battle | Independent Lens...

The Revisionaries shines light on the Texas Board of Education, which has been engaged in a years-long battle over what belongs in public school textbooks.

This Department Has Worked ______ Days Without an FBI Visit.

Thinking about it, that wouldn’t really be that credibility boosting.
This Department Only Works on Average _____ Days Without Government Harassment
would perhaps be a better measure.

Don’t get out much in libraries, do you?
Librarians are guardians of civilisation and knowledge, but that means they have to defend Karl Marx and V I Lenin as much as they do Thomas Hobbes and even Mein Kampf. You cannot be a conservative librarian and a good librarian.

Yep. This can be as small as “Hey there was a crime committed in this town, we need to take all the computers to check for clues” to as large as “We need to know who checked out this book, give us those records” to “Hey we just want to go on a fishing expedition, let us see your records”

This can be contentious. Many (most) libraries have privacy policies that prohibit giving up this information without a warrant. Every state in the US has patron privacy laws at a state level. Here are a few links to look at. Children's librarian Judith Flint was getting ready for the monthly book discussion group for 8- and 9-year-olds on "Love That Dog" when police showed up.

The Connecticut Four are librarians who filed a lawsuit known as Doe v. Gonzales, challenging the constitutional validity of National Security Letters (NSL) issued by the Federal Bureau of Investigation (FBI) under the USA PATRIOT Act. In 2005 the Library Connection, a consortium of libraries sharing a common computer database, received a National Security Letter demanding that the "libraries in the Library Connection network identify patrons who had used library computers online at a specific ti...

Things that are common IT sense aren’t always common sense at small and rural libraries where the librarian may be the only IT staffer. Libraries use software to help them do this, but it’s a challenge for many small libraries to keep up. Library associations do the best they can to disseminate best practices for stuff like this.

I’m the one who made the original signs, always great to come and talk radical librarianism with people. Feel free to subscribe to my newsletter. 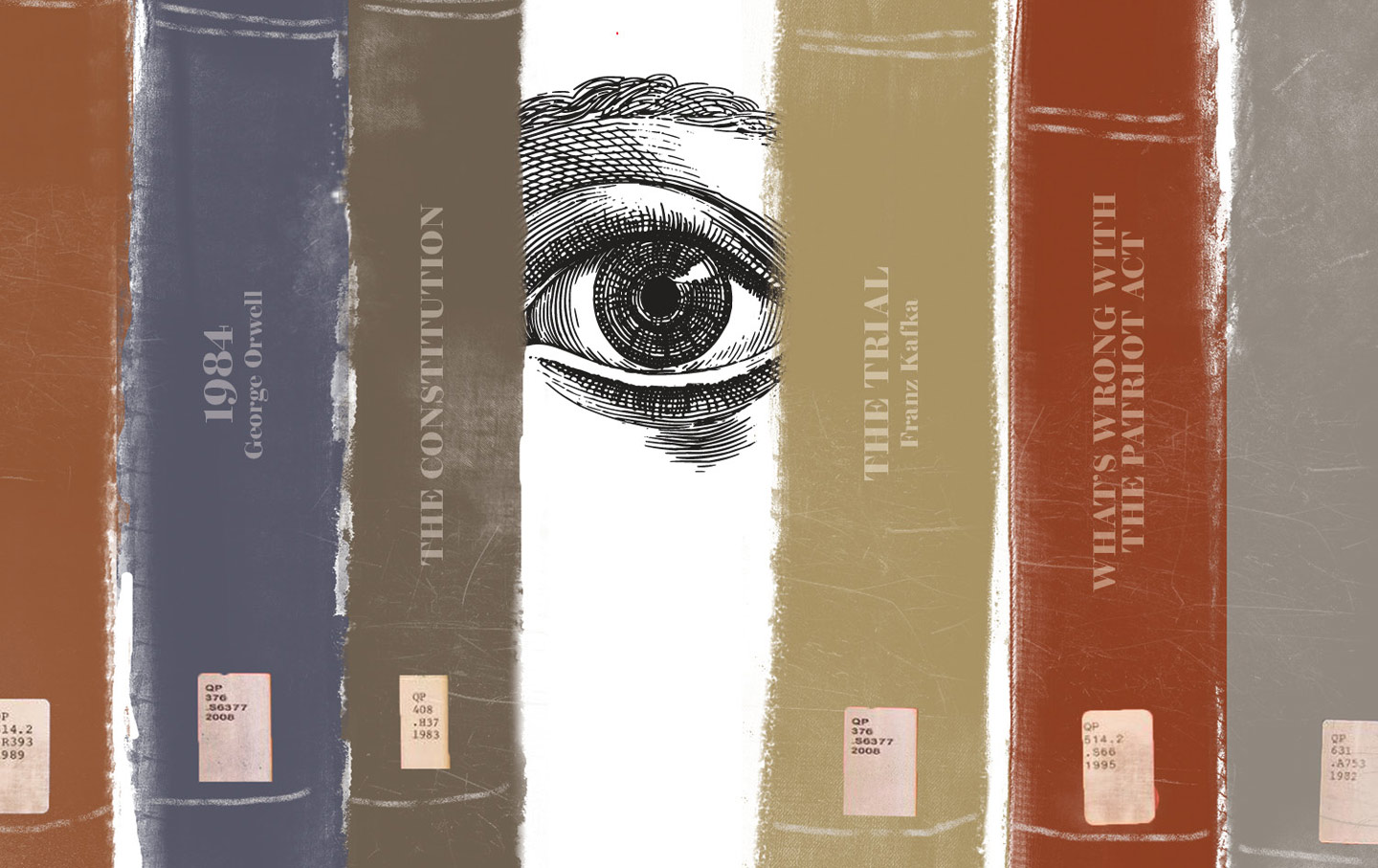 Librarians Versus the NSA

The fight for digital privacy has a new front line.


The EFF has assisted in defending libraries and librarians who have been asked to provide access to patron records and otherwise snoop on patron material usage.

One of the classes I took in library school dealt with collection development, including book selection and challenges to books already in the collection, aka ‘banned books’. I still have problems wrapping my head around putting books on therapeutic touch and The Hollywood Diet next to a current edition of the PDR.

eta: Thank you for the link to The Connecticut Four; I couldn’t remember the case.

This Department Only Works on Average _____ Days Without Government Harassmentwould perhaps be a better measure.

And I realize I definitely wasn’t wrong.

I’ll add this one to the list. It’s pretty ridiculous because the FBI had no reason to believe a crime had even been committed–other than someone writing in a library book.

PEN American Center has named Joan Airoldi, a librarian and library director in rural Washington State who challenged an FBI effort to search patron records, as the recipient of this year’s prestigious PEN/Newman’s Own First Amendment Award. Ms....

[quote=“MadLibrarian, post:10, topic:91490”]The EFF has assisted in defending libraries and librarians who have been asked to provide access to patron records and otherwise snoop on patron material usage.[/quote]Huh. I was actually thinking of when they did something like that in Se7en and it was kind of a big deal. But then, 1995 was a different time.

Huh. I was actually thinking of when they did something like that in Se7en and it was kind of a big deal. But then, 1995 was a different time.

Yeah that’s a thing that was a less-examined threat in the early 90s but librarians (who had always been privacy-conscious) really came together with skillsharing and awareness raising and lawmaking post-PATRIOT Act so most libraries now have specific and clear policies on giving patron information (digital information especially) to authorities, when and how.

A lot of times it’s just something that seems innocuous… a cop comes into the library with someone’s wallet and wants to get that person’s home address or phone number. The library HAS that information, but is it right to give it to the police?

And this gets complex as more and more data goes into the cloud. You have to make sure your vendors also understand and respect your privacy policies and guidelines (the CT Four worked for a service company to libraries, and were not in-library librarians themselves) which is quite complex.

a cop comes into the library with someone’s wallet and wants to get that person’s home address or phone number.

The address is usually on the photo ID that their name is on, so that answers that. However, if it were just the library card and a few other things that were found, I think it would be up to the librarian to call the person and tell them their wallet had been found.

@Akimbo_NOT thought “radical librarian” is an oxymoron, but the reason I raised an eyebrow at it is because Griffey’s concerns and positions seem entirely standard among librarians.

The cartoonish image of the librarian as uptight shushing scold really needs to be retired.

The address is usually on the photo ID that their name is on, so that answers that.

There are a lot of people without photo ID and a lot of people, especially people living in poverty, who move frequently and who don’t have live at the address that is on their government ID if they have one.

But yeah, that is the library policy as you state “Oh thanks, we’ll let the person know their wallet has been found!” but you can see how in a small town refusing to give that information to small-town police can be seen as … problematic. Or how even in a small library people might have differing opinions on whether you should help out the cops or not. Or whether the cop is even being straight with you about their “found wallet” story.

All fascinating issues from a library-ethics perspective.

Last time I found a lost set of keys, I contacted the library (there was a library card on the keychain) and the library called the person whose card and keys I found, and then had them contact me. They didn’t even directly give me the person’s number.

More library-related I once needed a book that was checked out. This was an academic library and the person who’d checked it out had it for a year. Without disclosing the other person’s name a librarian contacted them and asked if they’d be willing to let me see it for a short time. It turned out we knew each other.

This sort of problem doesn’t come up as much in the age of e-books but I still look back on it as a great case of librarians using their power for good.