Like it or not, the far right is heading for Germany’s Bundestag 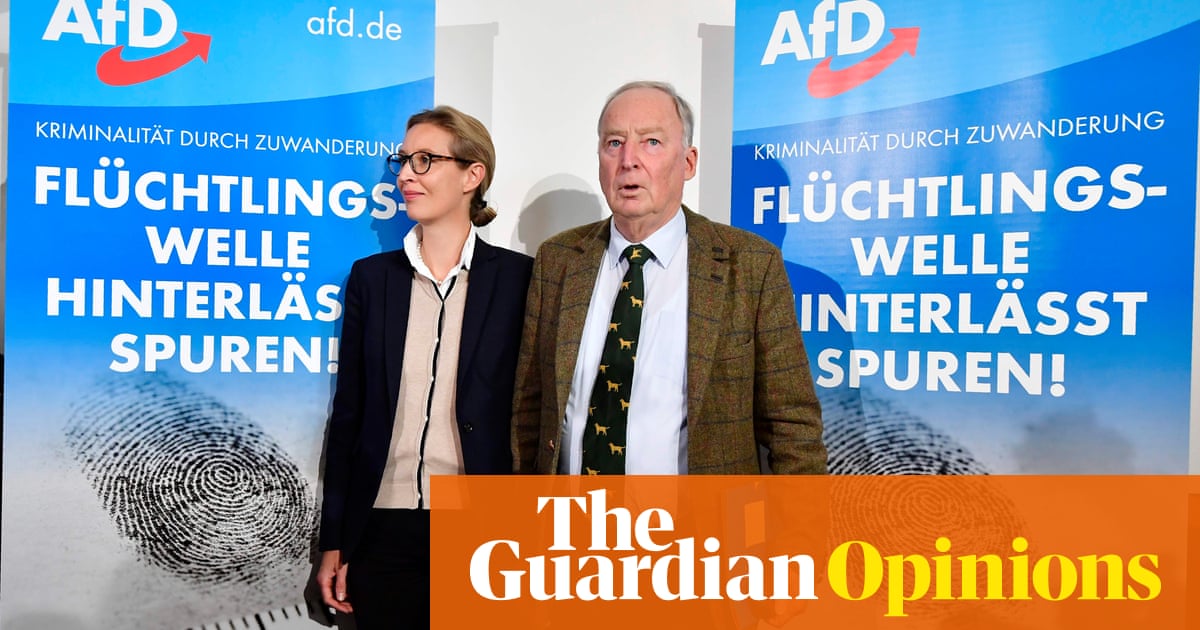 Like it or not, the far right is heading for Germany’s Bundestag | Alan Posener

The AfD party has become increasingly nasty – and more popular as a result, says Alan Posener, a correspondent for Die Welt and Welt am Sonntag

I know maybe only two or three people will read this, but if you ask yourself how the fuck anyone could let it happen that Nazis again are sitting in the Reichstagsgebäude after next Sunday, this might be a good text to start.

I feel depressed.
I thought about leaving Germany often when I was young. When working abroad, I learned that the place is much more bearable than most other countries.
Now, my whish to emigrate rekindled.

Small consolation perhaps, but I am sure that they will be met with far less complacency in Germany than in the US.

The Victory of Rage: AfD Sets its Sights on German Parliament - SPIEGEL ONLINE -...

Even as Chancellor Angela Merkel seems set to win her fourth term, the German campaign has been characterized in some towns by rage and hatred. The right-wing populist AfD is also expecting Election Day success, and it will change German political...

Not consoling, at all. That other places sport governments or MPs which might worse isn’t making me feel any better. It’s not even remotely a valid comparison, from my POV.

That the current and most likely next German chancellor, on the whole, seems to be the a one-eyed among the blind is bad enough. But Nazis in parliament is so bad, I cannot come up with any comparison. It’s worse.

I can’t think of a way of explaining to the next generation how this happened “on my watch”.

That, however, is surely a shared sentiment with many in the US right now.

If it helps, I’m thinking of moving back.

Given current developments I keep thinking and rethinking it…

Live in a country where the racist xenohobes are already in power (with even more racist xenophobes waiting in the wings to move in if the party in power isn’t racist and xenophobic enough for their liking) or move to a country which may just be a few years behind the curve?

Can’t we find a nice spot which isn’t too bad? I keep thinking about NZ, but from what I know their domestic policies and politics suck, as well. And their stance on Trump et al. sure ain’t dedicated opposition.

And moving to Mars seems no option, currently. Given the facts, Nazis might even get there first. Or, at least, libertarians.

NZ isn’t too bad apart from the cold and wet and the immigration requirements. And the sheep. Never forget the sheep.

In my case I think its more the unsettling effect of having significantly more than half of the population of the country I live in say that they really resent me and my wife being in the country and they’d quite like it if we’d just fuck off now, m’kay?

Germany at least would have less justification for doing that.

Germany at least would have less justification for doing that.

Depends. If you are white, christian, and not of the eastern persuasion, you should be fine.
For now.

Sorry, I am getting in a mood worth of Howard Beale.

Can’t we find a nice spot which isn’t too bad? I keep thinking about NZ, but from what I know their domestic policies and politics suck, as well. And their stance on Trump et al. sure ain’t dedicated opposition.

And moving to Mars seems no option, currently. Given the facts, Nazis might even get there first. Or, at least, libertarians.

The Principality of Hutt River, often referred to by its former name, the Hutt River Province, was a micronation in Australia. The principality claimed to be an independent sovereign state, founded on 21 April 1970. It was dissolved on 3 August 2020. The principality was located 517 km (354 mi) north of Perth, near the town of Northampton in the state of Western Australia. It had an area of 75 square kilometres (29 sq mi), making it larger than several recognized countries. It was not recogni...

Plenty of examples like that. None, I have to admit, quite compelling.

Historically, some small republics were quite interesting. Mainz, for example. Earliest in Germany, as I recall. But none lasted. Those micro-countries which do last longer than one summer usually do on the whim of a large power, like Transnistria. Or because they turned fascist. Which basically is the same thing.

BTW, two days to go. Neo-fascist - no, real Nazis - in our parliament. I can’t stand it.
I read what you and others wrote in the punch-a-nazi-or-not thread.

I’m quite sure this will soon be a very important discussion in Germany. And as one commentator said, even if I interjected to point out that there are many people who would punch, the consensus in Germany is that Nazis should not be punched but sidelined.

We will see how this turns out if the fucking AfD is going to be leader of the opposition, meaning special parliamentary privileges. Like, chairing the budget commission. Having the traditional right respond first to statements of the chancellor, and government, in any debate.

I hate to say that, because I usually warned about the real danger of something like this - but I didn’t believe I would see the day. I am, far and wide, not known as unreasonable optimistic.
But this is a fucking nightmare, and I’m not going to wake up from it.

I hate to say it but as I said in the (latest) punching Nazis thread - these people and their supporters are not new.

A few years ago they would all happily have been voting CDU/CSU and standing as CDU/CSU candidates. They are now just dropping their camouflage.

German society has always been racist and xenophobic in a generally polite, quiet sort of way.

You were fine to be a foreigner as long as you became as much like their idea of a German as possible (Stammtisch, Fussball, Schutzenverein, Jagdverein, Kegeln, Blumenkasten, gutes Deutsch, Einhaltung der Ruhezeiten) and of course never forgot and didn’t mind being reminded that you weren’t really German or as good as a real German.

Most Germans have never been comfortable with the idea that ‘foreigners’ (defined basically as people not exactly like them) could come and live and work in Germany on the same terms as Germans and without trying to become as much like Germans as possible.

You just have to look at how the Italians and Turks have been and are treated for that.

I think the right have been able to capitalise on that discomfort (and genuine fear).

As a lot of people have pointed out, large parts of the world are significantly poorer than ‘the West’ and their living conditions are only getting worse for the most part.

The only way those problems can be alleviated is by spreading the existing resources around differently. That is going to mean less for someone. Hardly anyone is prepared for it to be them.

That issue has been known for years and even presented in mainstream mass media (BBC, I see from IMDB that it seems to have been issued in German at some point):

Directed by David Wheatley. With Malick Bowens, Juliet Stevenson, Joseph Mydell, Dermot Crowley. A group of several thousand Africans migrate westward across northern Africa and sail across the Strait of Gibraltar to Europe. Their message is: "We...

People’s fear of their prosperity being threatened is rising and that gives the far right the legitimacy they were previously lacking to be more open about their views.

The fact that ‘immigration control’ and ‘hard borders’ and ‘hostile environments’ for ‘illegal immigrants’ are not going to solve the problem and can only logically lead to refugees being gunned down at the borders either escapes people or they are quite prepared to accept it.

Anyone have any insight into how German Antifa is doing? I’d expect them to be organising and recruiting at a ferocious rate given the current climate. 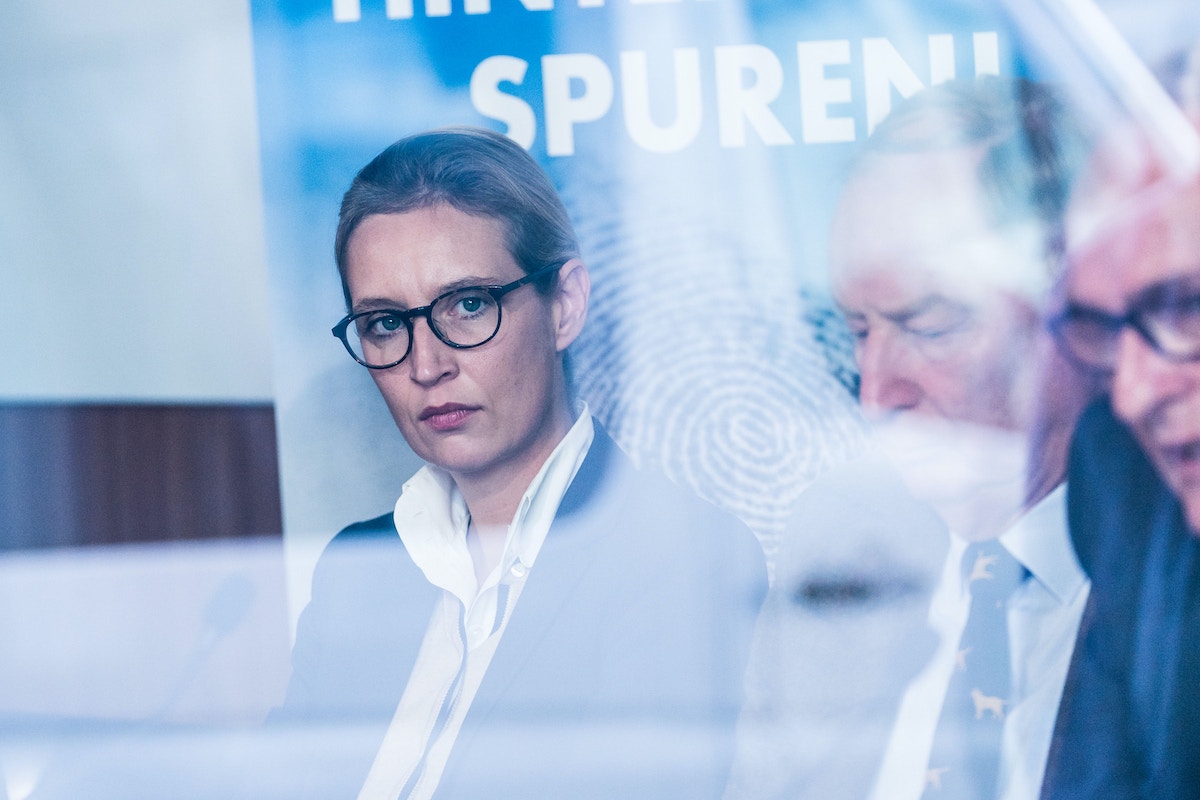 An American anti-Muslim megadonor is publishing fake news that's giving a boost to a German far-right party in Sunday's election.

The problem isn’t US money’s influence. At least if the reports I’ve seen on DW are to be believed, there is plenty of home-grown German extremist money.

Speaking as an outsider, it will be interesting to see where the AfD strengths are in the election. If they are in the former GDR, then I think it will be fair to say that it is more a populist/economic reaction than a racist/anti-immigrant reaction.

Honestly, I’d be more worried about the rise in extremism in the Bundeswehr than a small minority in the Bundestag. (And I’d like to make a Bundesliga joke here, but my heart isn’t in it.) The extremists-in-government problem in the US and the UK only became critical when the Republicans/Tories let political greed drive them into cynical coalitions with the slime; now the far right has taken over the GOP, and the Tories’ number one priority is implementing UKIP policy with the help of their friends in the DUP. I don’t see either the CDU or the SDP making a coalition with the AfD, despite the fact that Gauland is a product of the CDU.

That said, I’m not going to fall into the trap of being the arrogant outsider pretending wisdom about another country’s political process. Everything I said above is probably wrong.

German society has always been racist and xenophobic in a generally polite, quiet sort of way.

I un-happily agree with you, but the problem is that even racist xenophobic Michel had enough political wisdom, up until now, not to vote for a party whose leader would say things like Germans would have the right to be proud of the achievements of their soldiers in two world wars (“haben wir das Recht, stolz zu sein auf Leistungen deutscher Soldaten in zwei Weltkriegen”).

Seriously, half of the MPs this party is probably going to have wouldn’t be tolerated in a Stammtisch round, even in the rural remote area where I grew up.

What’s happening today is, of course, a result of a xenophobic undercurrent which has been visible to everyone who could see. But it is also something very new.

Meh to that account for not giving the link to the original source. In times of fake news, not something I can recommend.

They pulled the screenshot from wahlrecht.de.

That question would be worth another thread. And it’s difficult or nearly impossible to answer, since the antifa is a very diverse bunch. Also, they don’t share this kind of information publicly for good reasons.

Given the polls, and the fact most continental European countries are using modern election poll methods and statistics, this will be pretty reliable.

We’re headed for a so-called Jamaica coalition. With a loss in voter confidence this strong, the grand coalition is no real option. 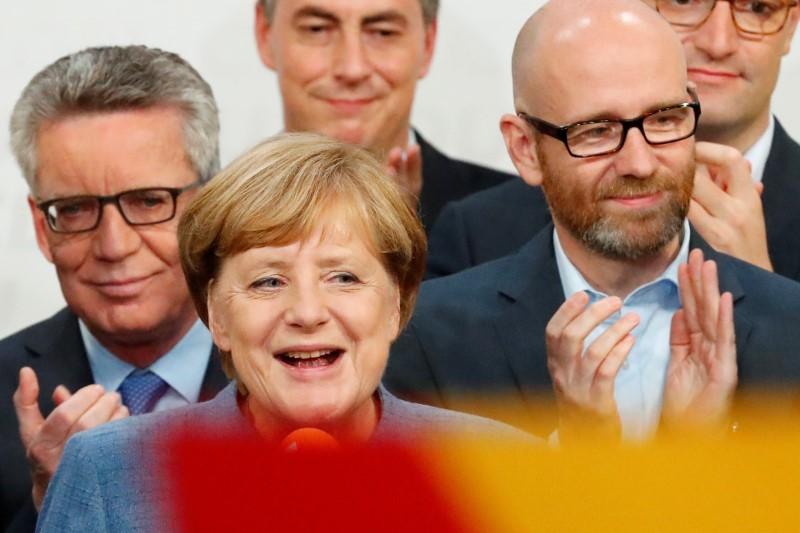 German Chancellor Angela Merkel won a fourth term in office on Sunday but Europe's most powerful leader will have to govern with a far less stable coalition in a fractured parliament after her conservatives haemorrhaged support to a surging far...

Exit polls have been very reliable during the last elections. The real vote will be known soon, we just finished counting the votes in our district.

A noticeable surge for the AFD, though not as bad as the average.