Lincoln Project: "law and order" president is the "most corrupt president in US history"

I think they formed, though, not just to get rid of Trump, but to protect the conservative project that’s been shaping our public policy since Reagan. They can go back to slashing taxes and deregulation, if only he stops being so obviously racist, misogynistic, transphobic, Islamophobic, etc.

They are not our friends if we care about a fair and just society.

As for bi-partisanship… it seems like the only time this gets brought up is when the Democrats try to move even the slightest bit left.

I thought this op-ed by Jennifer Rubin today was a pretty convincing explanation of what never-Trump (erstwhile?) Republicans like her–and like those in the Lincoln Project–want.

I’m a Republican, so your suggestion is a bit too far for me.

If you see Biden as someone who is vastly more in line with your values than Trump, why would you let a self-imposed political label like “I’m a Republican” stop you from giving Biden your full support in the election?

It’s not like you’re being asked to set aside your sexual identity and hop into bed with someone of a gender that you’re not attracted to.

It’s not like you’re being asked to set aside your sexual identity and hop into bed with someone of a gender that you’re not attracted to.

So you say, but we all know how it went down in Massachusetts: 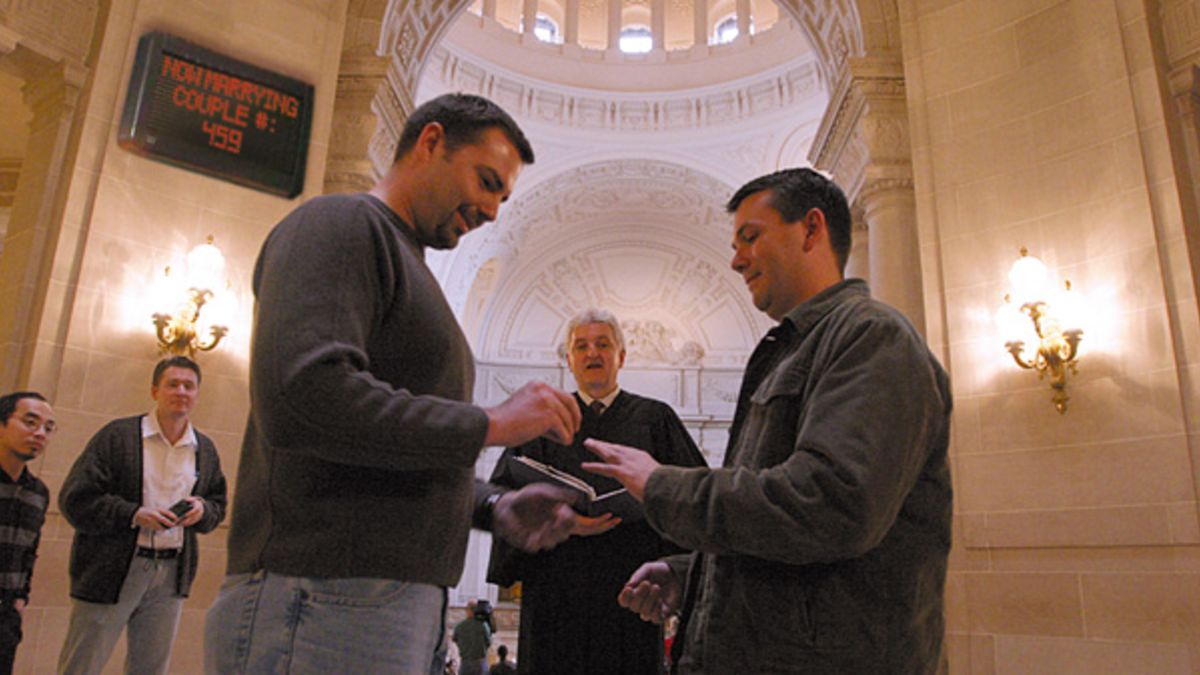 BOSTON—Justices of the Massachusetts Supreme Judicial Court ruled 5-2 Monday in favor of full, equal, and mandatory gay marriages for all citizens. The order nullifies all pre-existing heterosexual marriages and lays the groundwork for the 2.4...

As for bi-partisanship… it seems like the only time this gets brought up is when the Democrats try to move even the slightest bit left.

Interestingly enough, I was just listing to a podcast this weekend that reminded me the EPA was started by a Republican (Nixon?) in large part because at the time conserving nature was seen as a conservative value. That Nixon attempted a national healthcare plan, but Ted Kennedy blocked it because he wanted to pass health care in the following term. Or something like that, I was also trying to do a lot of other stuff at the time.

I don’t think it at all talks counter to “we are doing almost nothing bi-partison these days”, and far more to “wow republicans have shifted a lot in the last few decades”

There have been plenty of times in recent history that the Democrats have tied themselves into knots attempting to play nice… speaking of healthcare, Obama adopted a literal actual republican plan for health care reform, like he took it directly from what Mittens passed in MA, and they fucking had a melt down and refused to support it!

There aren’t any reasonable republicans left at this point. All they want is to get exactly what they want every time, with no compromise on their part. They just want to “stick it to” their enemies, which is anyone who doesn’t agree with them 100% of the time.

The idea one can’t possibly work with the other party is poisoning our politics. Bi-Partisanship used to be a thing. Surely there should be SOME common goals between parties.

On this particular topic, no, there is no working together. The GOP created this problem; it’s the culmination of over half a century of strategy; they need to clean this shit up if they hope to be a long-term viable party in the US. Step One might be getting rid of Trump and all his enablers; Step Two is reversing that half-century of leaning into white supremacy and voter suppression by trying to appeal to a broader demographic with their policies, not just rhetoric.

There aren’t any reasonable republicans left at this point.

Not in the Senate at least, yep. Maybe some governors.

There aren’t any reasonable republicans left at this point.

Not in the Senate at least, yep.

To his credit, Romney is the only Senator in U.S. history who voted to convict an impeached President of his own party.

I suspect that if Nixon had not resigned, there would have been many who voted for his impeachment, it just didn’t get to that point.

Romney, seemingly, made a principled stance, but he also could have just been angry that after demeaning himself at that dinner with trump, he was not offered a cabinet position.

I’m a little sick of the so-called party of morality and family values, the “pro-life” party, constantly voting to make the lives of millions of their fellow human beings harder and more difficult in every conceivable way.

“Fascist” is hard to spell for some folk.

Yeah, but it’s also a term that many, perhaps most, people don’t understand. So I’m not sure that saying it is all that helpful. Liar, though, people know what that is, and the media need to use it every time they quote a Trump lie. Not, he “said”, or the President “claimed”, or Trump “wrote”, but “lied”. Every. Time. He. Does. It.

the media need to use it every time they quote a Trump lie. Not, he “said”, or the President “claimed”, or Trump “wrote”, but “ lied ”.

I can see why journalistic standards would normally avoid that term simply because it assumes knowledge of what’s happening in that diseased ball of hatred he calls a brain.

Does he actually believe the insane shit that comes out of his mouth? He’s just narcissistic and egotistical enough that he might! This is a man who is so disconnected from the world around him that he appears to believe that reality conforms (or should confirm) to match his proclamations.

The duty of journalists is to clearly indicate that Trump’s statements are objectively false. So instead of writing “Trump claimed…” write “Trump falsely claimed…”

Whether Trump’s statements are intentionally false is an often unknowable and largely irrelevant question best left to the reader.

Whether Trump’s statements are intentionally false is an often unknowable and largely irrelevant question best left to the reader.

Yeah, I’ve heard that distinction and used to buy into it because it applies to normal people reasonably well. But not to Trump. I think it is time to stop finely parsing intentionality when Trump lies and just call everything he says that is false a lie.

I agree. Keep an eye on that scorpion. I keep seeing reminder tweets to thank them politely but DO NOT donate any money, as that money will soon enough be poured into a slush fund to fight Medicare For All and everything else progressives hold out hopes for.

In a way it seems like they are telegraphing their intentions and desires pretty blatantly. Like how Republicans in general try to claim they ended slavery (even though the predecessors of their ideas created slavery) b/c Lincoln was nominally a Republican, they now want to lay claim in the future to having defeated Trump (even though their ideas created Trump) because they ran slick ads.

Even though in both cases it will have been progressives, and quite importantly Black Americans who will have had a critical role in both.

Yeah, but it’s also a term that many, perhaps most, people don’t understand. So I’m not sure that saying it is all that helpful

It’s helpful if it’s accurate. I’m sick of not being able call things out truthful for fear of someone else’s ignorance.

Just one thing with LP: let’s not get sucked into “the enemy of my enemy is my friend” type thinking.

These guys are not on our side. They have their own agenda, and it’s not nicer and kinder than Trump’s… it just looks prettier on the outside.

I’d say the cold war was worth the overthrow of fascism which wouldn’t have been possible without the help of the Soviets.

Not ideal but better than the alternative.

It’s helpful if it’s accurate. I’m sick of not being able call things out truthful for fear of someone else’s ignorance.

Depends on what your goal is. I’m not saying to avoid the term fascism because people will react badly to it, rather I think it doesn’t communicate well on it’s own because lots of people really don’t know what it means. If you want results you have to use language people understand clearly. That’s not “fear” of people’s ignorance, it’s just clear communication, taking into account your audience.

At some point, we got to stop watering shit down. That’s how we got here, by pretending what was right in front of our face wasn’t what it was…

Fascism is a lot clearer a term than you’re making it out to be.

Joe Biden with your vote and probably your money as well

Biden will grudgingly get my vote (I really liked Bernie), big old “no” to him getting my money.

Not using accurate terms is not helpful either though. If you think the word fascism is particularly misunderstood, you can look for an alternative. But if you use something that doesn’t immediately evoke Mussolini, you are simply leaving some things unsaid.

I am sure the problem is not that people don’t know really what fascism means, but that they don’t really want to accept what saying it implies.