Right out’a Military Academy, I was sent to the Arctic Circle. What I did to deserve that, I still don’t know.

1] BTW: I soon learned to never go outside without total cover, frost bite can kill ya.

2] BTW: Gasoline freezes at negative 150 degrees, look it up if you don’t believe me.

Right out’a Military Academy, I was sent to the Arctic Circle. What I did to deserve that, I still don’t know.

On the first day of boot camp, when you all lined up, and the drill sergeant did The Talk (whispers: just like the movies), you silently held up a funny image printed to poster board. Everyone laughed, except the drill instructor. Year’s later, he would think back and realize, it was funny but still didn’t feel bad about the whole sending you to the Arctic Circle thing.

I was about to say “hey guys, no lines over on K2”, but of course nobody wants to brag about climbing the world’s second highest peak.

This photo just gave me such anxiety. What if you were in line and suddenly realized it wasn’t worth the risk and you wanted out? There’s no room on the ledge to go down. You’re trapped.

If I ever thought that might be something I wanted to accomplish in my life, seeing that photo wiped out any desire to do so.

This is the one that does it for me: 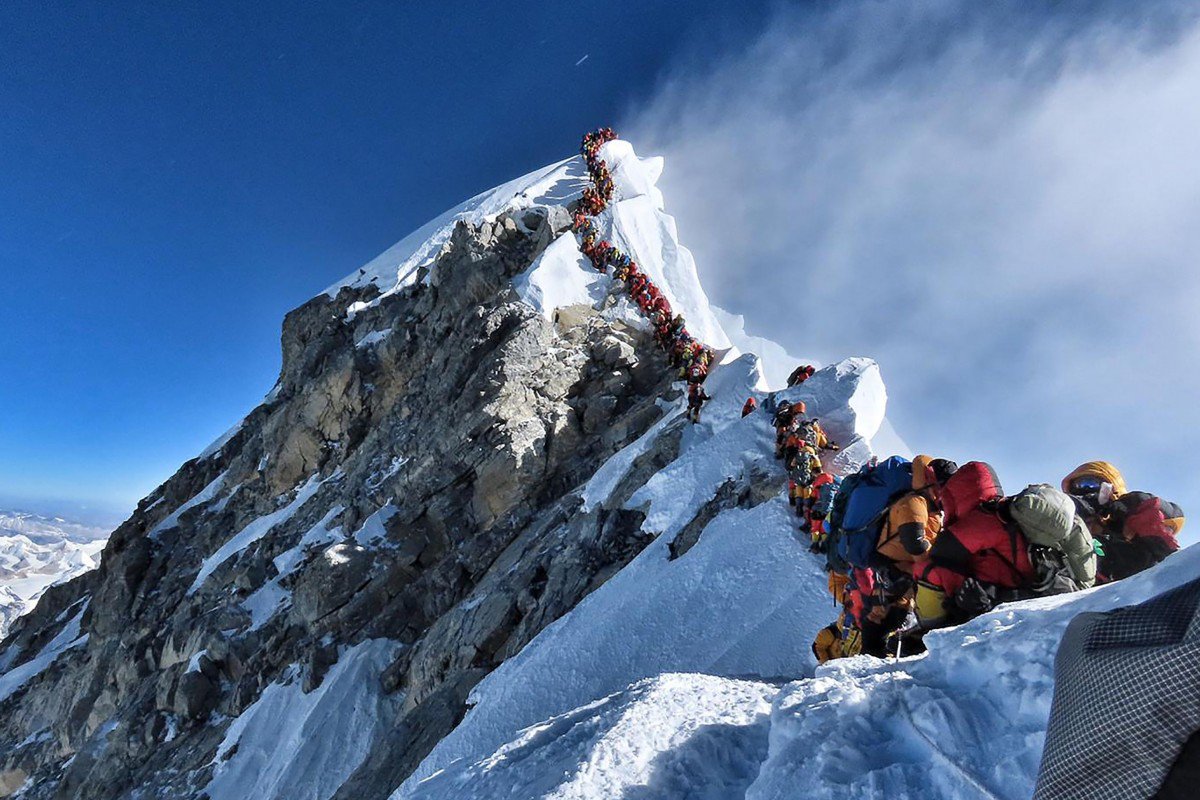 I heard some NPR story on this the other day. They were attempting to imply that some of the freezing death’s were the fault of the Nepalese, stating that they’re selling too many passes every year and not enforcing any sort of minimums on climbing ability or physicality.

I call BS on that - the shifting blame part, that is. If you pay your way up there, and yet you lack any common sense as to the type of danger you’re putting yourself in front of, then you get what you got coming.

So - a couple weeks ago I was on linkedin and saw a company posting about one of their executives had just died climbing Mt. Everest. And most of the post was a retrospective and a video of him doing a goofy dance at a sales meeting or something. I wanted to look at the comments to see if anybody would be snarky about rich people climbing Mt. Everest. And nothing like that. Just hundreds of comments with sorry, condolences, he was a good guy etc……EXCEPT for one spectacular lady who’s one word comment was “Awesome!!“. I laughed for real and out loud for like 3 min wondering if she just watched the video and had no idea he is dead. Or she just really fucking hated that guy.

As a side-note my BiL is a pretty serious climber and he is super snobby about Mt. Everest being silly to climb since it’s not very technical, yet also super dangerous.

Also shout-out to all the locals and guides, for whom climbing this mountain is literally just another Tuesday.

there must be a new ramen place at the top

My understanding is there are two variables driving this

I think “Bragging rights” says it all.

Probably not the ones climbing Everest for charity, but I can see that mentality being common among the rest of them.

I see it as ‘distribution of wealth’.

linkedin… most of the post was a retrospective and a video of him doing a goofy dance at a sales meeting or something. I wanted to look at the comments to see if anybody would be snarky about rich people climbing Mt. Everest. And nothing like that. Just hundreds of comments with sorry, condolences, he was a good guy etc

LinkedIn is an employment/business-oriented service and networking tool, so it attracts people of a more mature, polite, and professional attitude. In a nutshell… it’s not YouTube.

Technically, it sort if has those already; the Kibo still has gas-emitting fumaroles in its crater.

So next on the list is the Lightning Sand?

If I ever thought that might be something I wanted to accomplish in my life, seeing that photo wiped out any desire to do so.

I don’t see the point in climbing Everest except for ego massage. These kinds of extreme outdoor feats are OK if they have some value in terms of survival skills, so I question having pros guide you up and down a peak, with tents and meals waiting. You can learn the same skills on any high peak, and if you were lost in the Himalayas you wouldn’t be trying to climb a peak, rather cross a ridge at it’s lowest to get to the valley on the other side.

The popularity of this climb is in part because there is are companies who specialize in the peak. Take away that framework and only the serious mountaineers will do the legwork to get there and back.

Nobody goes there anymore. It’s too crowded.

When the first person that did this it meant something … to the rest of these Yahoos: You are too late and you are just fucking that mountain up.

Find something else to define yourself by.

Isn’t that what Sherpas are for?

A lot of the dead people on the mountain are Sherpas. They might be skilled guides and mountaineers but they aren’t immortal.

Up until I saw that pic Everest was like a mythical place, in my mind all cold, desolate and incredible difficult to get that only a few had tried…

…now I’m thinking, wow, that’s longer than the line at Best Buy during the sales for a 4K Tv, and less deadly!