Thank the gods BB is still up, I need my Sassy Trump!

Aha! I was streaming Netflix when it went down at 12:30 am Pacific time. I was worried I hadn’t paid my monthly fee.

From the looks of that heatmap, somebody is angry with the US and the UK today.
Or this is just stock manipulation. If I had the money, I would totally buy shares today and sell when the ddos attack ceases.

I’d not noticed anything in the UK today, but I choose to believe that it’s the fault of our clients and their bungled data centre move. Mainly because I’m so pissed of with them and their lack of preparation that I’m blaming everything on them today.
Certainly they will be to blame for the hangover I will have tomorrow.

It’s not a human-based cyber attack. It turns out that the internet is as tired of the US election as everybody else is.

Etsy? Paypal? How will I purchase toilet paper cozies made from cat hair now?!

Aha! I was streaming Netflix when it went down at 12:30 am Pacific time. I was worried I hadn’t paid my monthly fee.

Aha! I was streaming HBO Now when it went down at 12:30 am Pacific time. I was worried that my brother-in-law hadn’t paid his monthly fee.

As someone who actually runs an open DNS resolver (OpenNIC alt-root), I tend to skim the traffic I get for weird behavior. Lots of that today. Too many mixed-case requests at too high of a rate. A few IP bans were dispensed. The rest get taken care of with response rate-limiting, with alternating drops and slips (very short UDP responses marked as truncated, so legit users try again over TCP) for those who go too fast.

The only thing that worries me about this sort of thing is the response from the US Government. The last thing we need is another poorly thought out knee-jerk law like the Patriot Act.

As someone who actually runs an open DNS resolver (OpenNIC alt-root), I tend to skim the traffic I get for weird behavior.

Do you do that in a darkened room, tapping randomly on your keyboard while the monitor’s image reflects really brightly on your face, scrolling text that isn’t mirrored and is in focus somehow, before saying “My God, they’ve almost breached the second firewall!” as the text shows they have found seven out of nine of the password’s characters in a manner that in no way reflects how passwords work?

Why? I’ve been reading non-tech sites stating it happened, but has anyone a clue as to why? For the lulz?

You forgot, “accompanied by plaintive yet suspenseful swells from the brass section and martial snares.”

And some vaguely techno/dance/EDM when he fights back against the hacker, eventually hacking the hacker’s computer, typing “Pwned!” or “You got CompuServed!” before crashing the other guy’s computer somehow.

And then it turns out that he was hacking some mafioso bank all along, and mobsters show up at his door demanding his “assistance” with a “job”, while evil jihadist agents move their own plot forward in a secondary set of scenes. 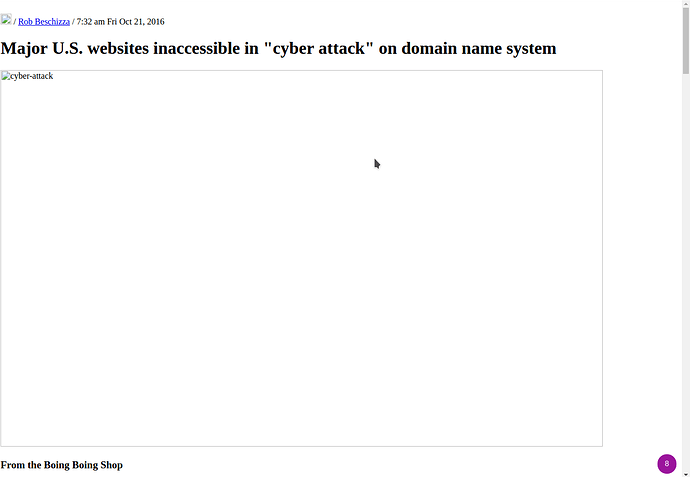 I think I’m now obligated to do so?

It would be amusing if my Nixie watch payments didn’t go through PayPal. I had to resort to cns.usps.com to print a shipping label today. Oh, the horror!

But seriously, we tend to forget how much the world depends on the interwebs for its daily rat race until something like this happens.

Una Kravets (awesome techie) referred to it as a DNS Snow Day. I loved that.

Twitter goes down and Trump disappears. Thanks China, Russia, No Korea! Bravo.