Man arrested for pointing finger at cops, then starves to death in jail

Originally published at: Man arrested for pointing finger at cops, then starves to death in jail | Boing Boing

Horrific. This detail jumped out at me:

A company with that name has to have been founded by sociopaths.

From the BB article, it stated that he was homeless and suffering from mental illness… and the -family- wants to sue do to lack of proper care? Why wasn’t this man transferred to a mental health facility? By refusing to eat or drink (over a period of time) wasn’t he demonstrating “inflicting harm on oneself”, and as such, wouldn’t he have been given involuntary care ( (Though location plays a part as to regulation). I’m not asking this to accuse anyone of anything, just wanting those questions answered.

Why wasn’t this man transferred to a mental health facility?

Because jails and prisons are often the front-line mental health facilities in this country.

Because we have a shitty, for-profit healthcare system, including for mental health.

Savage neglect. No excuses, just vicious neglect and a typical display of cop’s disregard for the populace in general except for the obviously rich and powerful.

He was found dead in a pool of standing water and urine."

This speaks volumes as to how “excellent” the care was. Holy shit, the incompetence! (And that is putting the most positive spin possible.)

Why wasn’t this man transferred to a mental health facility?

To be fair, this is a universal problem in the US… most likely some large percent of men being hold in Rikers in NYC are there because they are mentally ill. This is not a southern, GOP problem. This is an American problem.

The ability for police departments to deal with people suffering from mental illness is basically zero.
In 2019, the local PD executed a mentally disabled man in our neighborhood. Three cops could not deal with one 125 pound man weilding a shovel, FFS. So he was shot by one of them.
I mean, this is FROM the PD statement -

“As the officers entered the backyard area to determine the location of the man, he quickly emerged from an outbuilding, holding a shovel. The officers gave the man verbal commands to drop the shovel. One of the officers drew his Taser at that point. The man did not cooperate with the officers’ commands and began to rapidly advance on the officers as he swung the shovel. One officer fired the Taser, which did not have any effect on him. The man continued to advance, prompting the other officer to fire his service weapon.”

The family didn’t know what to do when he was acting erratically and called the police to the home hoping they would assist with the situation. What happened in the end is horrifying.
I saw the guy every single day from the window in my office as he would walk through the neighborhood keeping to himself. His extended family down the street was taking care of him because he had nowhere to go. The whole this was just fucking sad…

How in Hell did they manage to imprison him for a YEAR? Who set the bail, and why wasn’t a trial date set at the bail hearing? Isn’t there such a thing as ‘due process’ and the right to a speedy trial in the US?

Isn’t there such a thing as ‘due process’ and the right to a speedy trial in the US?

Well, no. Not really. It exists in theory, and is taken advantage of by wealthy people arrested… but we do not have a criminal justice system that treats those without wealth as human beings. I thought that was abundantly clear by now…

Holy shit, the incompetence! (And that is putting the most positive spin possible.)

I think we’ve got a situation where Hanlon’s Razor does not apply, though stupidity and malice are neck and neck here.

To be fair, this is a universal problem in the US

This. So much this. And it is horrible. Prisons are not set up to be mental health providers. Pretty much the opposite. And yet, that is what we have done.

Yep. We really need to get our shit straight in this stupid country. But we just can’t seem to do that… It’s despair inducing.

When we set up our criminal justice system to punish at all costs, and every ratchet applied to the system makes it more cruel and discourages humanity or mercy or even common human decency when it’s applied to the powerless or unpopular, this is the system we get. Shame on us as a society.

The sheriff is conducting an internal review of this situation

= ignoring the matter until the heat dies down, then forgetting all about it.

Isn’t there such a thing as ‘due process’ and the right to a speedy trial in the US?

Well, no. Not really. It exists in theory, 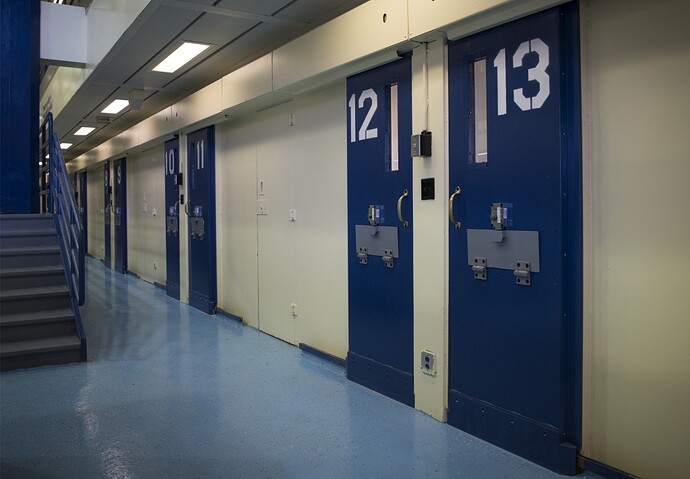 Kalief Browder, teen who awaited trial for 3 years at Rikers, kills himself

Kalief Browder, who was arrested at 16 for allegedly stealing a backpack and who spent three years awaiting trial, committed suicide Saturday, two years after his release from Rikers Island.

Other examples in Black Lives Matter can be found by searching that thread for the phrase “mental health.”

Yep. This is the much more common way that the American criminal “justice” system operates.