I dunno. Would it be legal to rig up a shower head that sprays dye?

That may be allowed. You’re generally given a pass on what you do to trespassers, but you may be liable for any injuries that occur.

Exactly why I shot down my own paintball gun scenario…

Seems like overkill. Why not just drop a cucumber?

maybe dyed water would be fine as long as it’s a non-toxic dye. It’s about $8 for a pint of food coloring, so that diluted a bit should last. Maybe a hose nozzle that has a soap attachment that will spray when tripped.

That sounds possible. The idea being that it’s non-harmful, easily identifies the culprits, and definitely makes them think twice before attempting to do it again. And I’m thinking of dye/skin contact, like the hands, arms, or other parts.

I mean, the glitter-fart bomb is interesting, but the glitter doesn’t really help identify thieves one or two days after the fact when all you have to do is shed clothing.

I find it odd that people are worried about the legalities of dyeing the clothes of thieves or making them jump when this is America and you can just shoot them with real guns that have real bullets.

I used to wage war on the deer who were eating my plants with this. It works, but they learn its effective radius pretty quickly. So you have to establish overlapping fields of fire. Then the battery goes flat after so many triggers, because deer never give up, and the garden perishes anyway. Eventually, after years of relentless combat, I capitulated.

The bar for booby trapped packages was set pretty high a while ago, even if it turned out later that not all of the “thieves” were genuine: 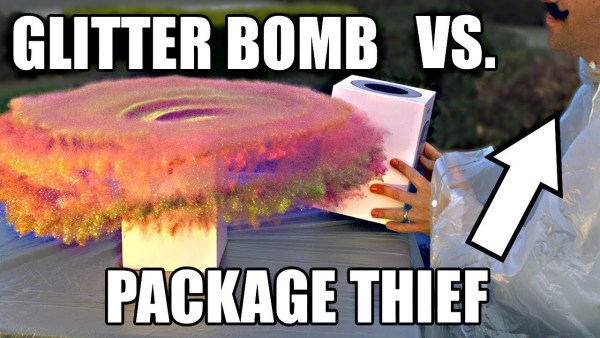 We’ve all seen the videos of thieves shamelessly stealing packages off of people’s porches. Now someone is fighting back.

They don’t exactly look scared to me. More like they’re startled for a second, decide that it’s a booby-trapped box with nothing to steal, and casually wander off to try the next porch. No frantic scrambling or fleeing. Pretty brazen all around- they’re quite confident in their own safety.

“I don’t know if it’s due to drug use or homelessness” says man who owns several houses.

These things will give you a good soaking.
I know because my mum asked me to go out and pick some basil and failed to warn me that they had installed one.

We got security cam footage of the guy who swiped our Pioneer center channel speaker off the porch. He’s really dopey looking, I made flyers with his picture and posted them around the 'hood just to be a pain in his ass.