But is there ever a Stephen Miller exchange that isn’t bizarre? I mean, I expect the shaming and mocking tone from all of Trump’s spokespeople, but it’s the barely checked rage from Miller that’s so off putting. I’m honestly surprised they even let him speak at all. If you’re trying to spin a failing administration, and win the undecideds over, a spokesperson that projects nothing but contempt might not be the guy you want out there.

When stripping away the context and symbolism I find the few pieces of artwork I’ve seen from this book to be quite lovely.

Too bad the context behind it is so awful.

They are more accurately called internationalists

I prefer to think of myself as an EPCOT-ist.

Breitbart and 4chan started using the term exclusively as an epithet for Jewish people, especially politically or financially connected ones. Often with lots of (((parenthesis))).

Parentheses are so yesterday. 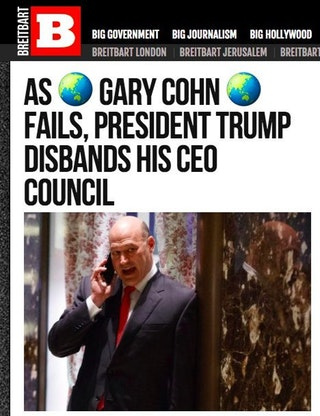 Awesome, they aren’t even going to fire the guy and they’re going to give him a position that involves him not being around obnoxious teens.

Hey now, my brother in law is head(?) custodian at a local elementary school. It’s probably the first job he’s really liked and the kids love him.

But damn [all] of these anti-semites don’t just suck up all the vocabulary.

It is nothing new and it has been going on for a long time on all sides. The first time I noticed it is when the MSM ran off Noam Chomsky decades ago for expressing anti-Zionist views and labeling him anti-Semitic. Professor Chomsky was way too far left for anyone to stick up for him on the right, and he became a permanent fixture of the lefty underground. Meanwhile the term Zionist fell away from common use and ceased to mean anything…

I am pretty much done arguing about the meaning of words anymore. I guess that makes me an alt-human.

I tried to find the book in PDF form or scanned, and no such luck.

This article though shed some light on it:

Yeah, it’s pretty obvious what he was going for. I guess if one spends some time on 4chan this would all seem natural and “funny”.

In the alt-right view of things, traditional left-right differences are replaced with nationalism versus globalism. If you believe that governments should regulate business corporations, you are a nationalist on the same side as the alt-right. If you believe that all humans are equal, you are a globalist on the same side as Wall Street. Yiu cannot be anti-racist and anti-capitalist, because that means holding nationalist and globalist positions at the same time.

Professor Chomsky was way too far left for anyone to stick up for him on the right, and he became a permanent fixture of the lefty underground.

Erm, the rest of the world doesn’t really see him that way. He’s certainly mainstream enough to deliver testimony to the UN after all.

If you’re trying to spin a failing administration, and win the undecideds over, a spokesperson that projects nothing but contempt might not be the guy you want out there.

But they aren’t trying to do that, which is why they use Miller.

They aren’t looking to win an election. They’re looking to remove the possibility of ever losing one.

It’s kind of strange that song/video from an Australian group that seems heavily influenced by William S. Burrough’s would be a rallying cry for Trumpsters, but sure, why not, nothing else makes sense anymore.

Nothing is true, all is permitted.

has hired intellectual property lawyers to defend his creation against misuse

So IP is suddenly a good thing??? Weird…

the kids love him

The gentle-but-firm education in the thread following this post is a beautiful thing:

@solid_jews @washingtonpost How is anti-semitism still a thing? I thought we would have gotten past that about like 60 yrs ago

@SeanHisaka @solid_jews @washingtonpost You asking this question is exactly why it's still a thing. anti-antisemitism has been in European culture for the last 2000 yrs.

@Rudy53088 @solid_jews @washingtonpost Not sure if you're indicating my question is against Judaism? I'm moreso astonished/appalled with no cultural connection

@fatneckbeardguy I'm listening now. Need to know where to look for education. Not haven't, rather allegory of the cave