I have been riding motorcycles since 1968, street riding since 1975. It never ceases to amaze me of the out and out unfounded hatred that morons feel for motorcyclists. It boggles the mind, truley. 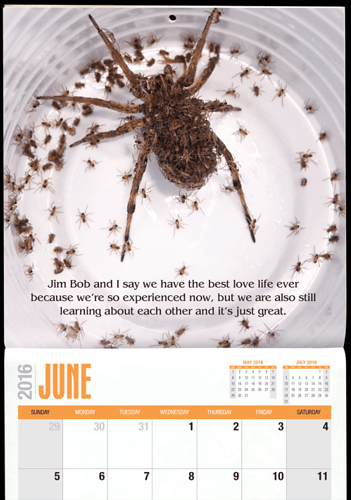 So…are we saying that we’re not buying this guy’s story? 'Cause if we do, it’s more of a tragic accident, not evidence of anti-motorcycle rage. If anything, it shows that the motorcyclists were acting dangerously by passing in a no-passing zone. Most of the time, sure, they’d be fine, as long as nothing goes wrong. Yes, I see a lot of crazy, anti-motorcycle assholery out on the roads…but I also see a lot of crazy motorcyclists who really compromise their own safety, and/or the safety of bicyclists and pedestrians. And crazy bicyclists who knock over pedestrians. And joggers in the street who force cyclists out into automotive traffic. It’s not so much that cars need to watch out for motorcycles as it is everybody needs to watch out for everybody. (But yes, it is true that motorcycles and bicycles receive a high degree of road rage.)

Fisher went to Crum and said, “What were you doing? You hit them!”

That doesn’t seem like a spider-bite reaction. I don’t care how painful it is, you’re going to give a shit.

It’s a spider now? It was a wasp in earlier stories. Or, you know, attempted vehicular homicide.

I did that exact same maneuver when trying out my friends NASCAR simulator game thing. I knew what I was doing.

Yeah, we’re not buying this guy’s story, because when another motorcyclist approached him and said “Dude, you just totally hurt those motorcyclists you ran into!” he replied “I don’t care!”. Multiple times. No remorse then. The only remorse he feels now is that he might not get away with it.

I knew this was Texas as soon as I read the original headline. That’s got to be the most motorcycle-hostile state in the country.

SO HOW COME NOBODY ASKS TO SEE THE BITE? SHOW ME THE BITE!

Exactly. His initial statement, captured on the video, wasn’t “something bit me.” It was “they were passing on a double line.” His swerve was retaliatory.

In all likelihood he wanted to block them and was too slow, hitting them instead.

I have a friend that was riding a bicycle in the mountains of Colorado, having the time of his life, zooming downhill, when a bee stung him, and he slid out, smashed his bike to pieces and broke his leg. It can happen.

…it’s more of a tragic accident, not evidence of anti-motorcycle rage.

Are you kidding? Everything is evidence of anti-motorcycle rage.

I have a friend that was riding a bicycle […] when a bee stung him, and he slid out

I was stung on the lip while riding my bicycle to work last summer. It was quite painful, but it didn’t cause me to lose control of the bike.

If the leg was bit, you must aquit!

I did that exact same maneuver when trying out my friends NASCAR simulator game thing.

You bit your friend in the leg?

Yesterday he told reporters it was a wasp. I suspect he saw the two bugs fighting and, being the compassionate person he is, decided to intervene. That would explain why both bugs bit him. I wonder if he was able to save either of them?

It looks like Crum was attempting vigilante justice to me, and the “insect bite” excuse was pure horseshit.

"We asked Crum if he would like the chance to apologize.

’To her,’ he said, referring to Sanders’ girlfriend. ‘But to him, no. Because he was doing something illegal.’"

What a homicidal dickbag. What he did could easily have killed the bikers. Clearly he’s in the mindset of genocide,which is the endpoint of dehumanization of other people.