Originally published at: Marge Simpson cuts her iconic hair in painting outside the Iranian consulate in Milan | Boing Boing

I would have gathered a bunch of hair clippings and some gorilla glue and covered that entryway but good.

Curious why the artist gave Marge the defeated/worried expression. Certainly deflates the impact and makes Marge almost seem sympathetic to the anti-women side of the fight.

Looking up more of Palombo, it seems they do a lot of trigger art using the Simpsons. This one is also pretty stupid and pointless. Same artist in the Boing post:

Getting back to Sad Iranian Marge the Worrier, I would have used this variation of Marge with scissors in the right hand and hair dangling in the other hand. Threaten 'em! 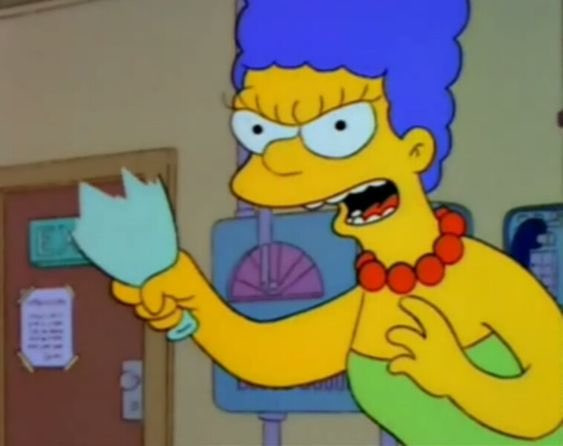 She looks saddened and appalled to me. She’s horrified that she had to join in hacking off her hair b/c iran’s “gov’t” refuses to treat the Iranian citizens like human beings, esp the women.

I certainly wouldn’t object had she adopted a more threatening mien.

Still, I can’t help wondering how those scissors will next be used.

Someone ask the Blob how the 1953 US/UK/CIA overthrow of Iran’s democratically elected government, which was serving its nation’s people at minimal cost foreigners has worked out for anyone but parasitic capitalists.

The Iranian regime has had more than 40 years to liberalise its policies toward women, with or without American sanctions. The U.S. and the UK’s support of a piece of garbage like Shah decades ago, while obviously a terrible error, is not directly relevant to what’s happening to women in Iran right now due to religious fundamentalism. Let’s keep the focus here where it belongs:

Surely it is relevant to what’s happening in Iran right now, because without the coup, you wouldn’t have had the Shah’s reign and its hideously oppressive side, which aligned modernity with repression and torture, rather than with Democracy and national pride, which in turn created the fertile ground for Khomeni’s regressive fundamentalism to gain support and steal the eventual revolution.

It’s the same story that you’ll see throughout the 20th century in the region, where western opposition to nationalism, socialism and secularism, has propped up oppressors and fuelled fundamentalism as an outlet for people’s ambitions when any alternative was given no chance to deliver.

This is of course not to remove blame from the fundamentalists- their ideology is still one of hate, ignorance and anti-human repression. However, the conditions that led to that being popular enough to seize power do depend heavily on the country’s history.

It’s indirectly relevant. Yes, we all would have been better off in many ways if the US and had supported Mosaddegh in the early 1950s. However, that’s no guarantee that the same bunch of sexist religious fundies wouldn’t have overthrown his or successive democratic Iranian or Persian governments in the intervening 70 years.

[ETA: Men of all classes in iran aren’t just abusive, the male citizens are also abused. General, continual abuse of the populace is also baked in, excepting the male politicos and clerics. The way they act indicates most/many of them were also subject to abuse. Witnessing or being threatened with abuse is also abuse.]

As a historian, I got to agree… The US has some guilt in the current situation, but the US did not force these policies on Iran… the current government forced them on the Iranian people, in the name of religion.

Surely it is relevant

Sadly, the “murale” has been erased on the 6th of October- none of the Italian news sources I checked states by whom.

A vile act, a cowardly deed.

Sadly, the “murale” has been erased on the 6th of October- none of the Italian news sources I checked states by whom.

Per the photos in this story and others it looks like this is probably a big vinyl or other self-adhesive graphic that was applied to the cheap plywood barrier that the consulate has set up protecting the front of their building. Google street view indicates that there’s plenty of other graffiti on that barrier, and I imagine that sections are probably painted over or replaced on a regular basis.

Your idea is not how the world works.

Feel free to explain why. One would hope that Mosaddegh being allowed to establish a liberal democracy in Persia would have forever precluded this bunch of religious fundie misogynists from ever taking power there, but there’s no guarantee that would have happened.

Counterfactuals aside, liberals and progressivs should be focusing on supporting those Iranians protesting for equality and liberty now rather than trying to change the subject to the U.S.'s very real historical misdeeds there. The U.S. is certainly responsible in part for the current regime gaining power but it doesn’t in any way influence its discriminatory domestic policies.

I suppose the point of relevance is that the US trying to force the Iranian government to conform to its own interests would be a bad look, to say the least. Good thing this movement comes from the brave women of Iran instead.

I mean, there are people who were adults in 1953 who are still alive now, so it’s not THAT far into the dustbins of history.

ETA: The UK had the same head of state until a few weeks ago!

The effectiveness of the Western countries’ latest sanctions is debatable but there’s no chance they’ll influence the Iranian government’s policies. More important is the protestors understanding that their struggle against authoritarianism and theocracy is part of a larger international progressive struggle.

I mean, there are people who were adults in 1953 who are still alive now

All those teenagers in the Eisenhower administration who overthrew Mosaddegh, we can prosecute them for their war crimes now, at the nursing home