Once there was just that one village idiot sitting on a stone wall down the road from Gomorra who just kept calling the local officials in Sodom complaining about the noise.

I’m all in favor of making fun of MTG and assorted wingnuts, but I think it also needs to be acknowledged up front that these people are doing this on purpose, partly to get engagement and partly because they want their disciples to hate LGBTQ people enough so they’ll go out and commit genocidal acts.

The tone should be much less “Tee hee! Nazis are dumb and ineffective!” and more “Nazis are going to kill a hell of a lot of innocent people, so watch the fuck out.”

Madison Cawthorne tried to warn them. But did they listen? 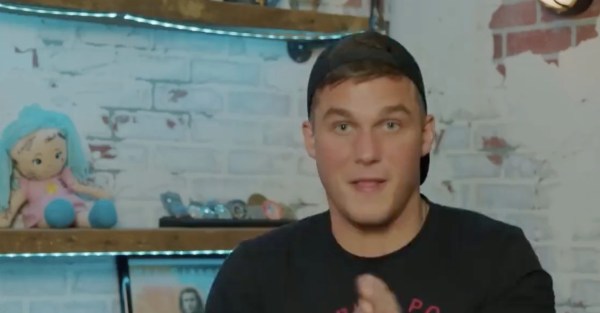 Madison Cawthorn gossips about how colleagues he admires enjoy cocaine and...

Republican Madison Cawthorn just couldn’t help himself, tattling on Washington colleagues that he’s “looked up to” for enjoying themselves with cocaine and a good ol’ …

If she’s the first ‘big name’ to catch monkeypox, it could be popularly renamed Marjoriepox.

A logical follow-up would be MTG being called Monkey Taylor Greene.

We’ve seen this show before. At least this time it isn’t the President blocking serious work on prevention and treatment.

With MTG spearheading the program, I think “the second time as farce” might have something to it.

Couple of things this could trigger:

I already saw a story on Twitter of a massage therapist with all the symptoms, but they wouldn’t do a test for it because she’s not a gay man. This is already getting ugly.

In reality, monkeypox is caused by close, skin-to-skin contact of any type, with anybody, gay or straight, who has the virus, according to the CDC (and common sense). It can even be spread by touching objects such as bed linens that someone with monkeypox has touched.

and in some cases it’s spread through respiratory “secretions”.

And here is Dan Savage’s take on the situation:

“Right now, it’s behaving very much like an STI—and almost all of the cases have been among men who have sex with men,” said Dr. Ina Park

My favorite typo of late 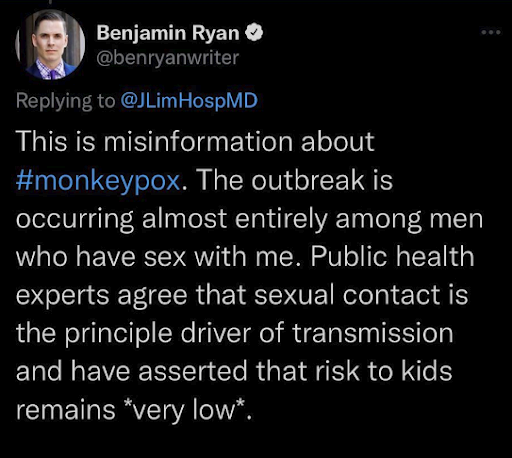 It’s not “being delicate” to think about how the ways this is being reported and engaged with by medical types can amplify growing homophobia. There‘s a selection bias present because MSM are often more proximate to STI testing, and there are already cases of non-MSM developing monkeypox and being refused treatment, as mentioned above.

What do you think that emphasising the current overrepresentation of MSM among those diagnosed accomplishes? Do you think that somehow prevents it spreading? There’s already a vaccine for this, we could be mass-producing and distributing it instead of blaming already-marginalised groups. What does “brutal honesty” get us when vast numbers of MSM are highly attuned to this and already adjusting their behaviours and trying to get vaccinated? 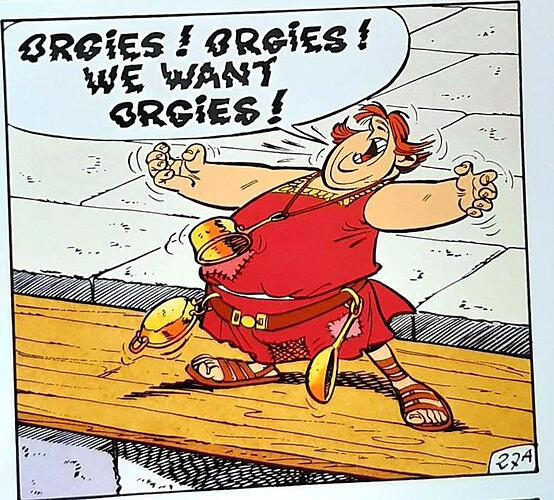 What does “brutal honesty” get us when vast numbers of MSM are highly attuned to this and already adjusting their behaviours and trying to get vaccinated?

It could have gotten changes to behavior to happen faster, like as soon as Dan Savage started talking about it, which was in May. It could have gotten the organizers of circuit parties and similar events / venues to cancel them starting in May, at least until the vaccine could be made widely available. That’s it. Edit: I realize this would have been a post-covid business disaster for a lot of venues that were expecting to come roaring back to profitability in 2022 pride month. But to me that’s a very sad calculation to put that ahead of a serious health problem.