soon it will all be over

I for one, welcomed 2016 UR36, but like all the candidates this year it let me down…

NASA's new space-monitoring system has detected a large asteroid hurtling towards Earth, which is scheduled to pass us safely in the next few hours.

They are the Masters of Projection.

Not all citizens are welcome in all neighborhoods

It’s worse than that; on election day voters are required to cast their ballot in their precinct (at least where I am; it may vary by state). Precincts that have Democratic leaning populations are artfully starved of voting booths and polling stations. Their polling places are changed frequently and in ways that generate confusion and inconvenience.

It’s careful, managed voter suppression. At the moment however, it looks like a fail. This time.

Karma baby, the GOP is about to have a very bad decade. Supreme Court will flip, this business with polling places will be over, and a case will hit SCOTUS that ends the gerrymandering of voting districts, congress will flip, if not now then later. And the GOP will get to live the collective kick in the balls they’ve been asking for the past 8 - 10 years.

Then progressives are going to have to put the fire under the Dems before they follow the GOP down the swirling waters of the party toilet.

Confusion is worse than police scrutiny? Well, sometimes, I guess.
The confusion is thick with this one (me) but seldom does it shoot at me.

And… god I hope so… on that last bit.

If that just happens to come out to keeping ~dark~ people from voting even once, well, that’s a sacrifice the GOP is willing to make.

Being born on third base and acting like he hit a triple, it’s his thing. 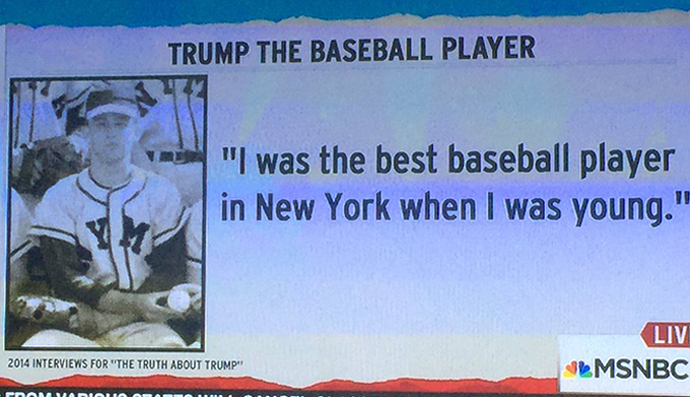 Or should that be projectiles?

“Our country has changed” - Chief Justice Roberts, in his majority decision.

Yeah, what is with Roberts, anyway? Is he really so incredibly dumb-ass stupid that he really believes this? Or is it just blatant racist hypocrisy? Or a bit of both? 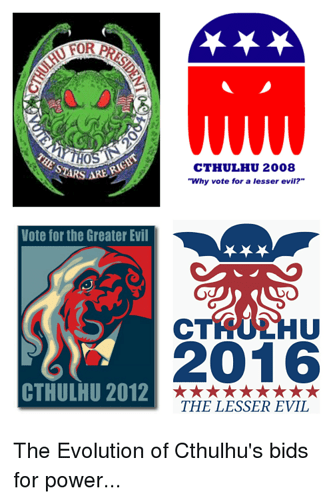 Wouldn’t it be a bad idea to announce its candidacy? I thought Cthulhu usually opted for the stealth, confusion, and madness tactic.

Could POTUS send in the national guard to run the polls in each closed location?

This is one reason I’m so angry about people who make false equivalencies about the two major parties. They do NOT both do this kind of thing. Democrats do not attempt to enact policies that would keep large numbers of Republicans from exercising their voting rights.

Holy fucksocks, am I glad that I don’t live in Arizona, Alabama, Texas, Louisiana, Mississippi, or North and South Carolina.

(I’ll let y’all know tomorrow morning how long it takes me to vote from start to finish.)

Well, as Max_Blancke keeps telling us, they need to keep a very close eye on the votes, to keep people from voting twice. She was worried that her first vote would be stolen for Clinton.

(I’ll let y’all know tomorrow morning how long it takes me to vote from start to finish.)

It would be interesting if everyone did this tomorrow. Location, maybe some description of the political and demographic make up of your area, the time of day you voted, and how long it took from arrival to departure. Plus any other additional details (e.g. general mood of voters, intimidation, etc.).

Having said that, I am fully aware that some things are only interesting to me.

Honestly, it will all depend upon how awake I am as to whether I remember to take note of all that input or not.

I’m voting on my way in to work; and based upon past experiences, I don’t really expect any long lines or anyone trying to intimidate anyone else… but good luck to anybody who tries me before I’ve had my first cup of coffee; they’re probably gonna regret it.

Well, as @Max_Blancke keeps telling us, they need to keep a very close eye on the votes

Max just needs to own his bigotry, already.

Like Jeffery Osborne said, I really don’t need no light to see through you.

This is seemingly the top comment on the story (Yay troll power)
All those ppl who voted 2-3 times for Hillary, 9 days before the election…

Keep that thought; it would be worthwhile to investigate to see if former Justice Samuel Alito Antonin Scalia votes in this election.