Meet "Quadball," the sport no longer named by an anti-trans children's fantasy author

Note to self: if I ever become famous, my only declared public position on anything will be “puppies and kittens are cute, right?”

It’s brave people like you which has helped make our land what it is today.

Isn’t it easier just to not try to disenfranchise a whole group of people? Much more language latitude.

And here are members of my cabinet with a statement.

You should let them out of the cabinet. 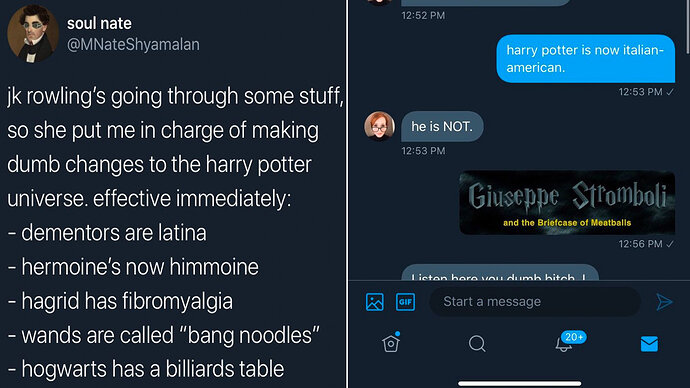 Giuseppe Stromboli is a character name from a tweet that features a mock direct message conversation with Harry Potter author J.K. Rowling about changing the name of the titular character in the books to "Giueseppe Stromboli." 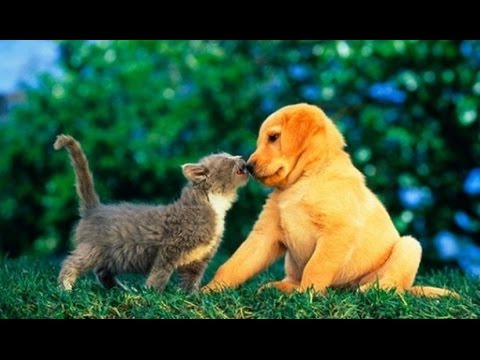 Untold thousands of celebrities avoid this kind of controversy every day simply by not choosing to make bigoted statements in public forums, or at least choosing not to double down on those statements after being called out for them. It’s not really that complicated.

Isn’t it easier just to not try to disenfranchise a whole group of people?

No. It’s much easier for some to be a spineless blob with no moral compass, clearly.

But, this is just a string of characters, so no one should take offense.

Long before the anti-trans thing, I was concerned because the actual sport did not involve flying.

That’s cool. I doubt I will ever watch it, but 5 gold stars to all involved for doing the right thing! In spite of what at least one person in this comment section seems to believe, words do matter, and what we call people, object, and actions are not simply a string of characters. Maybe if humans were emotionless robots that would be true, but we are not.

How about just don’t be an asshole? That’s an easy bar to hit, really.

Apropos of nothing, other than “biological males” and assorted bullshit, allow me to drop some actual facts.

Fact 1) Male brains and female brains differ structurally in some regular and identifiable, although minor and technical, ways.

Frontiers | Gender Differences Are Encoded Differently in the Structure and Function of the Human Brain Revealed by Multimodal MRI (frontiersin.org)

Fact 2) Upon study of trans male and trans female brains, the brain structure correlates with the self-identified gender rather than the gender assigned at birth.

Research on the Transgender Brain: What You Should Know – Cleveland Clinic

Fact 3) Combining these facts, you quickly realize that the concept of “biological gender” is fundamentally flawed. It relies entirely on what body part is examined. If this person has a woman’s brain, is she then a woman? I would answer yes, as the brain is the organizing principle of the human, not the genitals.

Fact 4) This has wandered far, far off topic and should return to Quadball post haste.

God every JK Rowling thread her supporters just crawl out of the underbridges to defend her.

If I may make my stance known, 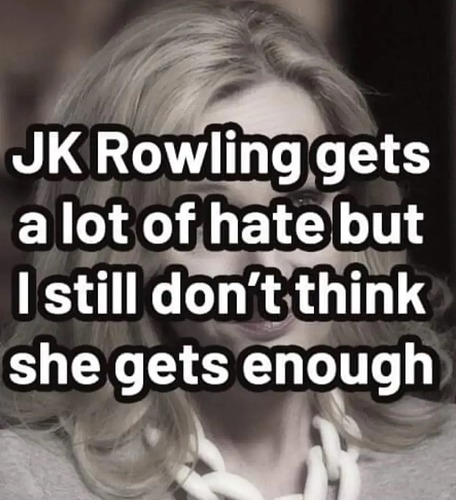 Speaking as someone who’s never had to reject a parasocial relationship because the famous person decided I didn’t achieve their bigoted standards for basic humanity:

Is it weird that folks are rejecting the Quidditch name because of That TERF, but not… the game of Quidditch itself? Or Harry Potter fandom? I recognize that Harry Potter was the defining property for many folks’ childhoods, but I still have trouble with the idea of keeping Quidditch but not “Quidditch”. Can someone help me better understand how folks relate to these media and associated things that they don’t get dragged down with their creator?

I guess if we rejected every art by Horrible People there would be a lot less art.

Is it weird that folks are rejecting the Quidditch name because of That TERF, but not… the game of Quidditch itself?

No. They’ve been playing the game, enjoying it, building connections doing it. The fact that JK Rowling turns out to hate a lot of the people she inspired doesn’t change those things, so they have separated them from her.

3 posts were merged into an existing topic: Should trans people be allowed to exist in public spaces? (Spoiler: yes)