Holy crap, some of those hit me too hard. I had to stop reading.

The solution is easy, just drink your troubles away, Jesus rolled like that too.

i have long been obsessed with the meta-idea here. for instance, there was a last time that i picked up my daughter (before she became too big.) i’ll never remember when it was, and at the time i of course did not know it was the last time. so many events that in the light of time become significant, but those moments (and even the memories) are just gone.

Some are rough, but these tend to be offset by teen drama.

“Sorry for leaving you in the dark, I’ve been pretty busy with
work and haven’t had much time to think. Maybe, see you Thursday.”
Our last conversation I cried and knew that our problems weren’t
fixable. He left for holiday the next day. He wanted “some time to
think”. I texted him about whether he’d thought things over after not
hearing from him for 5 days. We did meet on Thursday and he ended
things.
He told me he was in love with my best friend 3 weeks later. They
became official 1 week later. They are now together and I haven’t spoken
to her in over a month.
Bee, aged 17.

I just got back from Mexico, hence the Coronas…

If you’d pour out that beer, would it count as corona discharge?

No, that’s what happens when you hit the pee station… 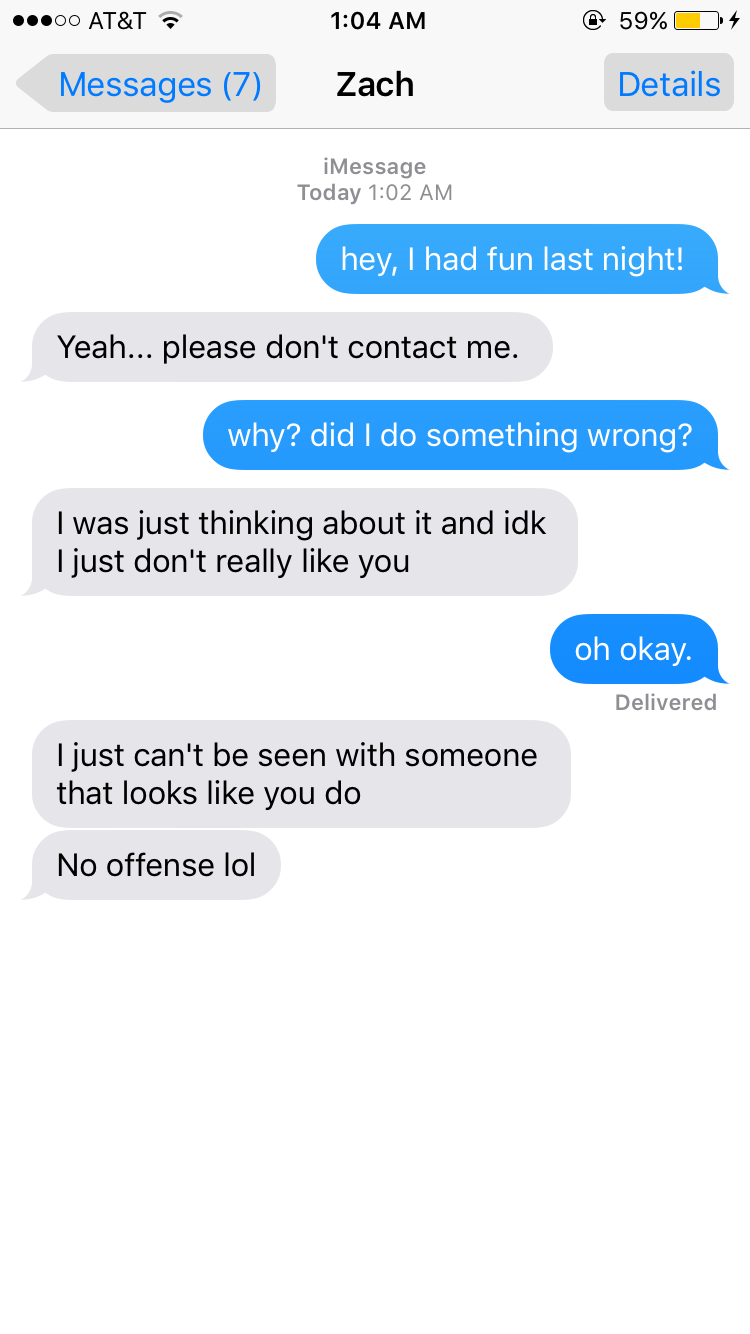 I lost a very close friend and confidant today. He is still alive, but today I realized the booze is his friend, and my dignity is optional to him.

I needed to read these, because I think I sent one not long ago. Mine wasn’t me being an asshole.

I think I sent one not long ago.

You’re going to keep thinking about that one for a while, too.

That could be a very complex dance rather than just a brutal asshole being brutal.

‘Here’s some reason to feel like you dodged a bullet’ maybe.

Although, it really does appear as if blue dodged an ICBM there.

It looks to me like blue was directly hit by the ICBM.

It seems from my perspective (my demographic details are publicly available here) that it was a racial issue.
I mean, it seems obvious from the history and culture I’ve perceived about various places in my country. But then I’m assuming these people are in my country. And I’m assuming that the texters fit within my concept of those areas. Which I suppose is assuming a lot, if I’ve not seen representative samples.

Could be, could be. But would blue rather find out about this person’s real attitude now, or perhaps have impressed grey enough to give them an ‘in’ to grey’s world and reaped the whirlwind of crazy once the relationship had become deeper and more difficult to extract from without… radioactive fallout?

I have the feeling that someone would call that an Uncle Tom kind of situation. But I can’t speak for that demographic in my personal narrative.

Also, I’m pussyfooting around real names and that’s probably making me enemies too.

Only once the behaviour/attitude is revealed and only after blue had decided to roll with it… I’m certainly not suggesting entertaining racists assholes proclivities.

Wait wait wait, you know these people!?!? I assumed it was from the tumblr (which I did not browse).

Been there, done that, having t-shirts printed.