Meet the man who has collected 16,000 antlers over the last 59 years

Ok, that image is not at all creepy…

This would have been a really valuable collection as far as citizen science goes if he went as far as documenting the exact location, time, date, and any other information in relation to each antler. I am doubtful that he did this so i’m not totally sure if the collection would still have any scientific value. If not then shame, could’ve been useful… instead its just a really weird and borderline creepy collection.

It keeps him off the streets.

Is this the place to ask “What’s the point?”

I’ll get my coat.

Must be on one of these coat-racks somewhere…

I wonder if he also uses a salt lick in winter with chicken wire?

Some places that’s illegal, but it’s a great way to harvest antlers when they are getting ready to fall off. Deer licks the salt, gets tangled in the chicken wire, and the already loosened antlers pop right off.

Other fun fact I’ve heard: You have to harvest the antlers pretty quick, because small animals eat them for the calcium and proteins.

What would his motivation for doing this be? He isn’t selling them. There are tons of deer around, if you hike a lot you will find sheds.

It’s best not to ask why hoarders hoard. Down that way lies madness.

Doesn’t look like all of them, just the ones mounted on the walls.

If we’re taking him at face value, a lot of those might be roadkill. Indeed, some of the skulls in the video seemed to have suffered some damage.

Not saying your’e wrong, just I could see how he legit foraged for them and came away with some attached to skull.

Oh, not hanging out with that guy. Next up are his human lamp shade collection…

Wasn’t he on Hannibal? 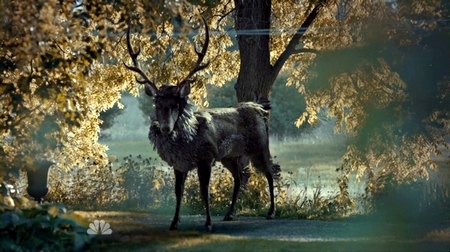 The Stag is an unnamed entity that makes various appearances throughout Season 1, 2, and 3 of NBC's Hannibal. Due to its lack of canon title, the Stag has been given numerous monikers such as The Nightmare Stag, The Shrike Stag, and The Raven Stag....

Next up are his human lamp shade collection…

It’s this way, through the foyer…

Actually, if you google “antler christmas tree” you’ll see this is a thing. (a thing that both impresses and creeps me out.)

… instead its just a really weird and borderline creepy collection

Waaaay over the border from where I’m sitting.

True. I collect (FOUND) skulls & antlers, and squirrels will gnaw on them if left outside