This really disturbs me. I can kind of understand why cops and politicians become fascists, as they have a lot of money and power to gain. But where are the rest of them coming from? Why are 90% of comments on YouTube or Facebook threads about hate crimes, cop murders or terrorist attacks pro-facism/racism? Why are young people, college students, even in well-educated, liberal countries, suddenly saying “You know what? Fascism turned out really well in World War II. I want THAT to happen again!” How is this shit even still existing, let alone rapidly taking over? Is there a massive, secret clone factory somewhere endlessly pumping out ready-made brownshirts, or what?

A college degree doesn’t stop you from being an arsehole.

Because large swaths of the country never came out of the last Depression (I mean “recession”) and have been primed by various politicians, religious leaders, and preferred media (Fox News) to think it is all somehow the fault of liberals, women, minorities, and dem queers.

Apparently the party really hates Romanians; they put up this advert in the Stockhom metro a few months ago: 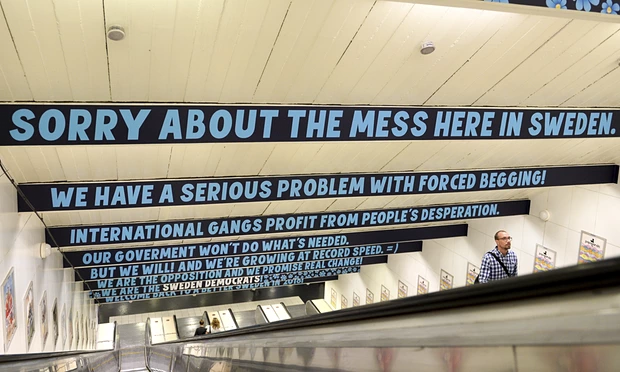 Apropos of nothing, one of my favourite stories was when some Romanians broke into a private country club in England, stole the nets from the tennis court and used them to trawl the private lake for fish. It just seemed so deliciously Marxist that I couldn’t fail to be impressed.

You can tell that one guy is a member of the elite, because he’s wearing a bow-tie.

Fascism taps into a number of weak points (for want of a better phrase) in the human psyche:

@milliefink recently summed all this up with a quote from Michel Foucault:

The strategic adversary is fascism… the fascism in us all, in our heads and in our everyday behavior, the fascism that causes us to love power, to desire the very thing that dominates and exploits us.

@milliefink recently summed all this up with a quote from Michel Foucault:

I think you’ll find that was Honey Boo Boo:

Thanks for the correction. Honey never seems to get the respect she deserves.

As another item to the excellent replies here, I think that part of this recent wave of broader anti-pluralistic/anti-democratic youth sentiment (see also: neo-reaction/Dark Enlightenment) is that fascism seems like this really far-removed thing that just Happened A Long Time Ago and that no person is capable of feeling now.
It’s the same logic when people in America say that racism is over because we have a black president. “Racists,” in the minds of people like this, are pretty much only slave owners and people who murder non-white people completely based on their melanin level.
The notion that simply disliking a predominantly non-white culture, associating it with crime and civil strife, and saying that its presence in your country will destroy the “authentic” (white) culture of that country could be racist is simply preposterous.
(You can see that in the video above where Ms. Ohlson punts on the question of Jewish people.)

…Sorry for the long post. Tl;dr–young people buy into this shit because they have convinced themselves they’re not racist because they don’t feel racist.

Sounds like one of the many bullshit stories that appear in Britain’s newspapers on a daily basis that turn out to be distortions of the truth, completely bogus or sensationalised exaggerations. Have you got a link to the source?

It’s the same logic when people in America say that racism is over because we have a black president. “Racists,” in the minds of people like this, are pretty much only slave owners and people who murder non-white people completely based on their melanin level.

Agreed. And along with that usually comes the claim that the only racism anymore is that supposedly faced by white people (which comes up in regards to affirmative action, “pc language,” black student unions, sports mascots, ad nauseam).

While addressing transphobia, The Onion put it rather perfectly this week. (See entry two.)

Outside of elaborate conspiracy theories involving Magnificent 12 and vaults of Rothschild gold; is it even possible to be ‘the elite in society’ if nobody knows it?

I always got the impression that, while tactfully held family fortunes and such are all well and good; you aren’t really elite unless the peons are aware of their inferiority.

There are a number of similar stories out there; here are two from my home town in the UK:

Water-keeper Chris Harvey, aged 61, of Birches Head, said: "Less and less people have fishing licences. We have always put fish we have caught back, but some people, mainly from Eastern Europe, are taking the fish to eat them.

“I have caught two Eastern European lads with a net and a carrier bag to put the fish in, and another group was dragging a huge net through the lake.”

Of course illegal fishing is seen as hugely important nowadays and you suddenly get interest in conservation from people you wouldn’t expect.

As a kid growing up in the 50’s and 60’s there was no question about the horror of fascists and Nazis. We saw it in the faces of our friends and relatives, We saw it in families that had a hole where there used to be a son, a father or other loved one. You really could see those holes even if no one said " they lost a son or…"). We heard our parents, our adults talk about the mindset that caused people to seek a final solution. And we were little and trusting and we thought that all that had been beaten, that now we could grow up safe. And lots of us were little white boys and just assumed everybody else must be ok with how things were. We assumed mom must like to spend all those hours in the kitchen while dad read the paper or listened to a ball game. Some of us had so much to learn. Some of us chose to learn nothing. I wonder how many years we’ll wait to act. Maybe we’ll understand how good people in the '30’s sat and watched that monster grow. And maybe some of us are the monsters.

“Illegal” fishing is SUCH a racist issue!

Up here, in cottage country, its a powder keg!

During the summer and fall of 2007, a number of serious incidents were reported to the authorities regarding assaults targeting Asian Canadian anglers in southern and central Ontario: April 27th,

So what happened to the story about the tennis net? Your second article is just a story about stolen koi carp and makes no mention of Eastern European stealth fishermen. Like I said, the British press is full of bullshit, some of which becomes urban legend like the Romanians that ate the Queen’s swans, which had no basis in fact. I’m sure every pub across the land now has a bloke who claims to have once caught Romanians, Gypsies or members of ISIS catching and eating “our” English wildlife.

I’ve been told a number of times that Chinese people in Britain catch local cats and pass them off as chicken in their restaurants. The comedian Mark Steel pointed out that it’s quite difficult to catch one cat, let alone the number required to service a takeaway and that its much easier to buy cheap chicken from your local cash and carry.

I heard that story from my uncle, who is a financial director and goes to country clubs. It’s possible that it’s an urban legend, but as I wasn’t using it to support anything and found it funny, that was the spirit in which I shared it. As far as I’m concerned, it’s fairly clear that there is illegal fishing going on (illegal times of the year, fishing methods, not catching and releasing, large scale fishing affecting stocks etc.) and this has a lot to do with the different culture; some eastern European countries traditionally have fish for Christmas and are used to catching them wild, so some people do the same in the UK. Apparently swans are also eaten, probably in ignorance of the Queen’s claim to them:

Kathy Hornig, a welfare officer for the RSPCA, has visited several sites where swan carcasses were found. She said: ‘We have been aware of this for some time. The people trying to catch the swans are causing them extreme distress.’

A spokeswoman for the Polish Mission in Peterborough last night appealed for migrant workers to be educated rather than punished for their offences. She said: 'It is possible that people don’t know the law.

‘Some don’t even know the laws of their own country. There is also more of a tradition of hunting for food in eastern Europe than in Britain.’

I prefer my politicians to be 1337