Melt a Nazi with the Major Toht candle

Makes me wonder…when alt-right dorks watch Raiders of the Lost Ark, do they root against Indy?

They probably just don’t watch it. I ran across an alt-right forum where they were livid about the nazi zombie movie Dead Snow.

They get all upset and butthurt at the Wolfenstien 2 ad campaign “Make America Nazi Free Again”.

Why should we care what makes nazis upset. All they’re good for is filling graves.

What is this bit from?

No idea. I googled something like “nazis are fertilizer” and got it there. I’ll reverse image search and come back in a bit.

KnowYourMeme.com has an entry: 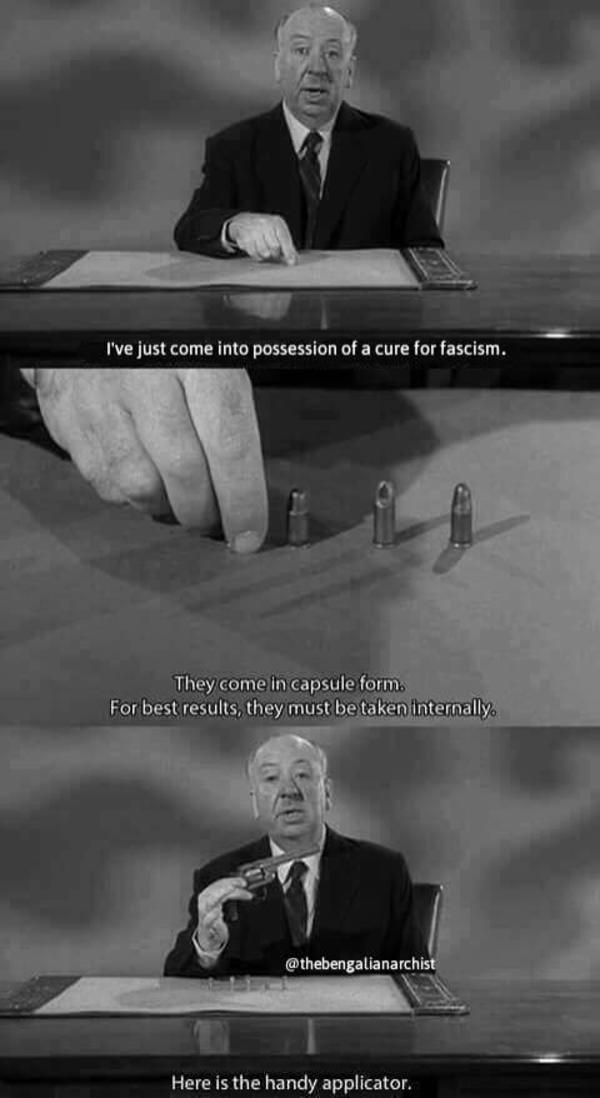 It’s adapted from a hitchcock bit, “A cure for insomnia”

Although, I would judge it equally if not insufficient to cure fascism. For that you need bigger guns that shoot faster, and bombs that blow up bigger.

Why should we care what makes nazis upset.

In order to upset them more.

Let’s see… how about we make it so the next time a Nazi gets bashed, it’s done by a black drag queen or someone.

It’s never too repetitive to talk about melting nazis, though!

Ha. Is his name supposed to be a pun on the German word for death, “tod”? I haven’t seen the movie since I was a kid, and I wouldn’t have picked that up back then. (A little googling shows it is an actual German/Austrian name, so maybe it wasn’t deliberate.)

…prisons that are more cruel and secure.

That’s how you breed sadists and fascists. This was noted by the British government during the transportation era as well as by Rudolf Diels, the first director of the Nazi Gestapo. Zimbardo’s prison experiment tends to bear out Diels’ observation.

Prison guards are at great risk of developing severe mental problems manifesting as routine cruelty. I believe they are the only occupational group that abuses their wives and children more than police officers - I seem to recall, something like 4X the rate of the general population? Prisons don’t just harm the prisoners, they harm the families of guards too.

You’re right, I got carried away there.

Happens to all of us occasionally, glad I could offer the assist!

Organisation Todt (OT) was a civil and military engineering organisation in Nazi Germany from 1933 to 1945, named for its founder, Fritz Todt, an engineer and senior Nazi. The organization was responsible for a huge range of engineering projects both in pre-World War II Germany, in Germany itself and occupied territories from France to the Soviet Union during the war. It became notorious for using forced labour. From 1943-45 during the late phase of the Third Reich, OT administered all constructi...