Micron pens were my go to for years and years for inking. I then tried out the Copic pens which were outrageously priced but everyone raved about them. My feelings were…meh.

In the end, I go with whatever is on sale to be perfectly honest. The Faber-Castell and Derwent inking pens I find at Michael’s are the cheapest normally and work every bit as well as any other brand.

For coloring pens/markers the two best are Copic and Prismacolor. When it comes to non-digital color you really need the best quality you can get.

but I think I prefer lines that vary in weight.

Such serendipity. Just a day or two ago I came across my old Staedtler pens, which haven’t seen use since I first used MacDraw 1.0. They created beautiful lines for technical drawings. Not your artistic tool, though. Too perfect! 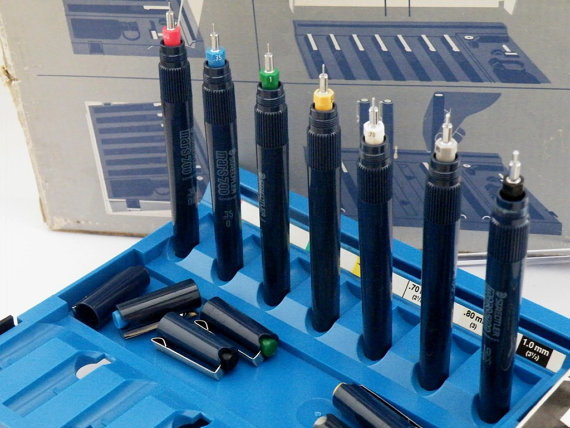 Vaughn Bode used Rapid-O-Graphs. That was why I bought them when I was a teenager and tried using them for years. What a mistake. He knew how to put them to good use. I sure didn’t

I’ve always got a fistful of Microns of varying thicknesses in my pockets. They make a good brush marker too. Love the Micron.

I like when people think these will be great for note taking and realize a bit down the page that these pens just aren’t for tasks that aren’t drawing.

I use the metal Copic pens, the kind where you can chance the nibs and the ink. I love them but i don’t think they’re inherently better than Micron pens. However i’ve found that my Copic pens lasted longer… on the flipside i’ve never felt guilty purposefully abusing Micron pens which is a plus.

I didn’t know that! I used them for some cartooning of a primitive sort. I remember shading one cartoon by using an ROG to draw hundreds of dots at varying densities. What a pain! I didn’t repeat the exercise.

I started cartooning using Speedball nibs and their ‘Black Magic’ ink. The definition and pure blackness of the lines were incredible. But this method of inking is laborious, has a significant learning curve, and you’re always one slip/jerk away from spattering ink.

I switched to Microns—briefly. My inking time was cut in half but the definition and contrast were nowhere near that of Speedball. It’s not Micron per se—I haven’t found any line of plastic tip pens that come close to the golden standard of carbon black ink. Still, they’re great for sketching and the variety of widths allows you to find which ones fit your rendering style the best.

I loved them back in the day. Yes, their one disadvantage is lack of line weight. BUT they are nice for hatch work.

I just got a few not that long ago. Drew a false god for the gaming group. It came out ok.

I used these in school for writing my notes during class. As a left-handed person these are great for writing because the ink dries relatively fast compared to other pens I’ve tried. Granted, I also did a lot of drawing with them too, which is where they indeed clearly excel.

my daughter’s and my favorite time together as well…yes the micron pens are fantastic.
we like to watercolor our sketches, the ink once dry is perfect for watercoloring on top of.

I like the Faber Castell PITT pens. Especially the brush tips.

Staedtler Pigment Liners for me. They always seem to outlast the Microns in my inky experience. For thicker lines and small fills I go with the (cheap!) Pentel Sign Pen. That thing is actually my favorite for overall pen brainstorming/doodling.

Fancy pens paralyze me, as do quality sketchbooks. I can’t draw half as well as when I am putting a black $2.99/12 papermate to a piece of paper with discarded office work on the other side. They smudge like the dickens, but you can make quite a few weights of line with them. One of these days, I’d like to sit with a stack of paper, and just fill page after page with stream-of-consiousness doodles until the pen runs out, then scan and post the drawings with a picture of the empty pen.

Totally read the headline as ‘micro penis for drawing’.