The child kidnapping crisis prompted him to suspend Godwin’s Law in a tweet from August 2017?
Impressive.

You’d think they’d be a little more sensitive to the “optics” given the history. But I guess this time it escalated from “acceptable cruelty” into “here we go on the path to genocide” too quickly for them to “pivot.” So I guess it’s up to us to keep pointing out the history and historic parallels until they fucking stop it.

I want to be clear: Microsoft is not working with the U.S. government on any projects related to separating children from their families at the border.

Well that’s okay then… NOT.

Microsoft is an evil monopolistic company that has done more harm than good in the world. That was true in the 90’s, and it is still true today.

That’s what IBM said about their involvement in the Holocaust.

IBM’s complicity was much worse than that. IBM ran the census that resulted in the murders.

Works better for corporations, it turns out.

I agree. Unclear pronoun is unclear. 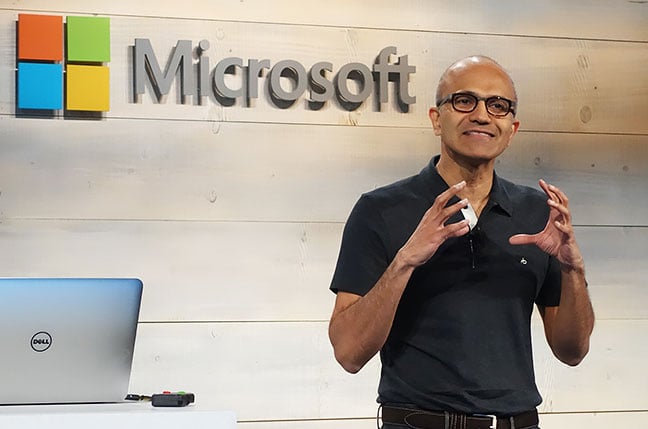 Microsoft CEO wades into ICE outcry: Cool it, we only do legacy mail

Ethics! Principles! But no talk of scrapping federal contract either

Who knew - it turns out that representatives of a soul-less, profit-seeking machine are less responsive to the public than… corporate management.

Having not seen the detail of the ICE contracts, The Register cannot comment on the legalities of cancellation. However, doing so would be certain to put Microsoft at a disadvantage when it comes to bidding for other, more lucrative government contracts in the future as it looks to challenge the dominance of AWS at a federal level.

As I’ve noted in other comments, typical gov contracts don’t give the contractor the option to terminate. That’s usually a unilateral right for the gov. The part about putting MS at a “disadvantage” is for sure right. In fact, they seem to be at a double-disadvantage here with nowhere to turn.

That’s what IBM said about their involvement in the Holocaust.

IBM’s complicity was much worse than that. IBM ran the census that resulted in the murders.

The larger concentration camps had tabulation machines to make running the camps more efficient. Including renting out the prisoners as slave labour. Amongst their other …activities, the SS was also a huge commercial enterprise.

As to compiling a census: two men who worked on this at the time, two very different paths:

René Carmille (born Trémolat, Dordogne, 1886; died Dachau, Bavaria, 25 January 1945) was a punched card computer expert and comptroller general of the French Army in the early 20th century. In World War II he was a double agent for the French Resistance and part of the Marco Polo Network. He ran the Demographics Department (Service de la démographie) of Vichy which soon, through a merger with the SGF (General Statistics of France), became the new National Statistics Service, which he continued to...

As an IBM subsidiary, Dehomag became the main provider of computing expertise and equipment in Nazi Germany.[5] Dehomag gave the German government the means for two official censuses of the population after 1933 and for searching its data.[8] It gave the Nazis a way of tracing Jews and dissidents using the powerful automated search tools using the IBM machines. It enabled them to search databases rapidly and efficiently, and the methods were used throughout occupied Europe by the Gestapo and others to locate and arrest its victims, so contributing to the Holocaust.[9][10]
https://en.wikipedia.org/wiki/Dehomag

Yup. And they made a tidy profit from all this. Capitalism at its finest.

Wrapped up in corporate protections from liability. It’s a wonder to behold!

Sure, assume the big contracts are set and can’t be changed.
What about the little ones. Say the os on each computer?
How about the ability to use Office?
Most licenses allow the company to change them as they please.

Would Microsoft really be at a disadvantage?
Would the government function without Microsoft Software?
Who would replace them?
Would Amazon or Google want the bad press and employee rebellion?
They could build their own cloud, but using whose hardware? Dell?
Perhaps Intel and AMD would be patriotic and support this.

And why just go after Microsoft, why not go after every every other company supporting this?

For example, I bet they use Cell phones to organize.
How about some pressure there?
Google Android and Apple iOS are supporting this, or are they just using Windows phones?
And the carriers? AT&T, Verizon, Sprint, and who else are supporting this?