You can upgrade it to windows 10 home for free, appaz.

They should just change the name of this product line to “nice computer, shame it runs Windows”

(Running Windows S presumably just makes it worse, although my understanding was that this is now something you can switch off (?), i.e. Windows 10 S is just a setting in Windows 10)

My only real beef is that it runs Windows S

After weeks of leaks, the device is launching in 26 markets today.

What if I don’t have a home?

I finally succumbed and have W10 on my Linux PC. It took over 4 hours and 6 reboots to do a big update. Again it reminded me I don’t want to deal with Microsoft unless I absolutely have to. I don’t know what software you use, but seriously you should consider a Slimbook http://kde.slimbook.es/

That it’s USB C powered is a win as well, as I can charge my headphones, phone and the Go… on the go, with a single cable.

I’m not sure how you would do that. There’s the Surface power supply input and one USB-C port. There’s no USB-A port. The power supply brick weighs half a pound. If you use that, then you can charge the Surface Go, and you can charge either the phone or the headphones with a USB-C to -A cable, but not both. To charge all three at once, you’d need an adapter with USB-C input and a couple of output ports. The weight advantage diminishes fast.

Hopefully the display will spur other OEMs to try slightly harder in that area; but otherwise seems sort of meh.

Surface screens have some of the most annoying gloss I’ve ever had the displeasure of encountering. Most touchscreens are unacceptably glossy, these are worse. The anti-reflective coating doesn’t seem to be up to the task; and the reflectivity makes the slight irregularities in the surface of the surface really stand out(in fairness the ‘surface laptop’ is much, much, tighter than the surface pros and surface books; presumably because it isn’t hiding its motherboard behind its screen); but on the non-laptop models the glass simply isn’t quite flat.

The ‘type covers’ are also kind of grim. Better than the super-trash bluetooth ones; but worse than even fairly cheap laptop keyboards; and not fairly cheap(don’t pay extra for the fuzzy ones, those collect the surface filth).

Also, unless you are both lucky and careful you’ll probably need the ‘complete’ warranty. The merely ‘extended’ warranty is attractively priced; but that’s because it doesn’t cover anything related to that delicate, delicate, screen. I’ll be interested to see what the out-of-warranty cost for this one is. Right now the cheapest(SP3) is $310 for a screen repair; I’m assuming that this one will be at least a bit less.

Once you throw in the keyboard and the warranty your $400 base model is now $600; $700 if you want a pen to take advantage of tableting on your tablet.

The Surface Go comes with something called “S Mode” enabled, which restricts you to only MS Store apps and the web, kinda like Chrome OS. It’s like that because this is aimed at the casual use. You can easily disable S Mode.

I’m currently working to get my hands on one.

So this is a review of… nothing?
I’m confused! 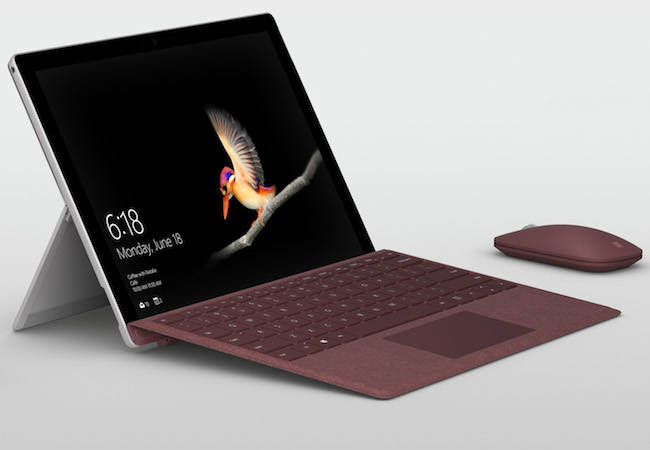 You're indestructible, always believe in 'cause you are Go! Microsoft reinvents...

Surely there must be some chromebooks around of similar spec?
My only experience of an MS surface has been entirely negative, having one dropped in my lap to return under warranty at work after it failed due to one of the many hardware issues they are known to be plagued by… for an alleged i7 tablet it ran like a dog.
… and I spent my bulk of my time on that in that tedious apply updates… wait for it for hours reboot… apply updates… loop anywone familair with microsoft products has no doubt wasted too much of their life doing.

Windows S Mode is just a mode. Microsoft changed their policy on how Windows S works. It is not it’s own product any more. You can now go on to the Microsoft Store and upgrade to a full version for free.

Yeah, I have gotten so used to Apple’s flavour of Unix that using other machines feels like lots of tiny paper cuts. Nothing serious, just annoying all the time. Little things that impose a drag on my productivity, leaving me less time to goof off.

I never said that this was a review. It’s news: new hardware’s out.

The review happens once I have one, on hand.