Any corporations/NGOs/billionaire dickheads enriching themselves on the backs of international sanctions should be treated like criminal war profiteers always have in the past. But Boing Boing is seriously letting someone guest post a big sack of $5 words to claim that Milosevic/Serbia’s genocide and war crimes are the result of western democracies forcing political correctness on people?

That’s not what I got out of it at all: I read that the serbian people let it happen by playing fair, by playing by the rules, by playing their opponent’s game.

If this sounds familiar, that’s because it’s happening outside people’s windows right now.
Everybody just…plays along, waiting for the next election cycle. Waving signs around, shouting slogans, writing letters that will never be read.

What are they gonna do if the next cycle never really comes?

When leftists attack liberals, I get all confused. What do they want? Just to watch the world burn?

It won’t be enough. What will be enough? Honesty will. Be honest with yourself, be active, get out of bed. Look outside the window, look outside the screen, work, walk, study, think, emote… 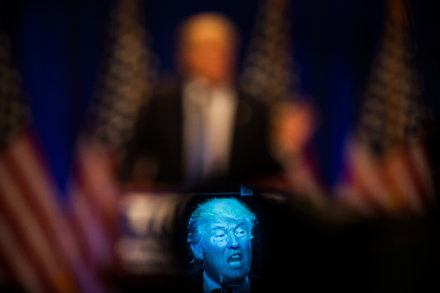 Opinion | Trump and the ‘Society of the Spectacle’

Are we merely addicted consumers of the spectacular images the president creates?

I’ve spoken about it multiple times, so i apologize if others here recognize my story but i think it applies with what’s going on with Trump.

I’m Venezuelan and i left around the time Chavez came to power, before he had much of a chance to enact a lot of sweeping changes. Though my parents were directly affected by his early mandates since they were part of the opposition. Anyway Trump is not the same as Chavez but there’s enough overlap that i can plainly see him for what he is and the tactics he uses to gain favor are not much different.

Appeal to the lowest common denominator. The shunned, the poor, etc. Appeal the greedy politicians and businesses. Offer only destruction of the country, the people in his base will cheer on as the status quo is torn down but will put no effort into building something better and new. Offer people everything, give them just enough back to keep them happy, but always take more than you give.

I think maybe you should re-read what she wrote, because I don’t think that’s what she’s arguing here. Tesanovic is Serbian (and still lives in Belgrad part time, I think) and lived through the war as a political dissident - which she correctly states was weak during the break up of Yugoslavia - pretty much no one came out on the street to oppose him in any serious way until NATO began bombing, until their own comfort was being disrupted (while not doing too much during the periods when Sarajevo or Pristina was under attack - hence her point about words being weak). I’ve known at least one person who was involved in negotiations for the peace and came away incredibly frustrated, even though in one aspect, he got what he wanted.

Plenty of people are able to understand that the Milosevic regime was terrible AND that the postwar set of circumstances guided by NATO and the UN have done little to heal wounds and in fact have only deepened antagonisms (especially between Kosovar Albanian and Serbs).

In one sense, it is incorrect to say that what’s been going on is not normal. Before 1946, strongmen leaders, extreme inequality, ultra-nationalism, war, openly bigoted institutions, and government-sanctioned anti-intellectualism were all too normal. The industrialised West enjoyed approx. 60 years of relief from that state of things, but that came to an end somewhere in the first decade of the 21st century.

All that understood, I don’t see any other course for myself and others like me except to hold the line as best we can by acting like liberals and supporting and defending the institutions of liberal democracy, beleaguered though they are. That doesn’t equate to denial of the encroaching darkness of right-wing populism and authoritarianism, nor does it equate to not having a contingency plan for the moment when the darkness oozes into our own homes.

All that understood, I don’t see any other course for myself and others like me except to hold the line as best we can by acting like liberals and supporting and defending the institutions of liberal democracy, beleaguered though they are. That doesn’t equate to denial of the encroaching darkness of right-wing populism and authoritarianism, nor does it equate to not having a contingency plan for the moment when the darkness oozes into our own homes.

I tried to respond in my own way but this perfectly encompasses my thought. The winning. Oh, the winning.

Trump macho? I’ll have to pretend to mull that over.