Haven’t we all wanted to? At least one time? Come on!

If all the Theme Parks are closed? Well, make your own Mr. Toad’s Wild Ride!

Other than child labor laws, the kid could be trained by the TSA to be a penetration tester.

Could have been worse:

So did he come out of it with a cool X-Ray souvenir?

As a parent I know this is scary, but as a former kid this kid is my hero.

although it seems a more likely name for a ride through a baggage conveyor at an airport with a lot of snow would be “mr. toad’s wet sprocket.”

Haven’t we all wanted to? At least one time? Come on!

When I was 5 my mom had to grab me by the collar as I was about to disappear down an airport luggage chute.

I’d like to think it was because they took a ride on the conveyor as well. It was the world’s funnest police chase!

Or chasing on those police Segways.

A second is all it takes. Busy airport conveyors route traffic by autoscanning the tag and then a “pusher” whaps the luggage onto a different conveyor. Seems dangerous as a joy ride. Source:

Nope. Not me. I did once see a guy (late teens, perhaps) in ‘baggage claim’ hop up on the moving conveyor and ride it for awhile, hunkered down, arms out, while feigning cutbacks and snapbacks. It was definitely funny.

For a moment I thought that someone at last was going to note that the verb to dive is not an irregular verb and that the past participle is dived. Silly me.

But FYI in British English we always said dived. I first noticed ‘dove’ in US writing about a decade ago, I guess. It has offended my sensibilities ever since. I can only speculate that someone entirely unsure decided for some weird reason that dived did not seem right, figured it may have been like the irregular verb drive and taken their cue from that, and that everyone else on the North American continent dived straight in to the same pool.

ETA and then I nose-dived (not nose-dove, eh, USians?) into Google. Seems it may be a US dialect expansion thingy and drive/drove may be in part responsible, and it has become more prevalent in the past 50-60 years. The word ‘increasingly’ is the main clue here. 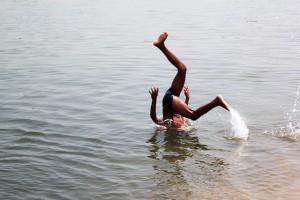 Dived vs. Dove in American Dialects

The past tense of “dive” exemplifies the quirky differences between American and British English. In Britain, this word is ostensibly “dived,” while Americans increasingly p…

No apologies for the derail seeing as Carla decided it needed to be " " in the first place.

He was with a group of about 20 people at Minneapolis-St. Paul International Airport, who were so busy dealing with their luggage, they didn’t see him take off.

The parents will get the not so cool x-ray “bill” souvenir.

9 seems a bit old not to realise the consequences both of one’s disappearance on one’s parents and of disappearing into a maze of moving heavy machinery. Would have expected this to be a 6 year old.