Musk haggles over price of a checkmark

Originally published at: Musk haggles over price of a checkmark | Boing Boing

That, right there, is the problem in a nutshell.

The Digital Overview Effect of the internet has conditioned many people to believe that they “need” to be online all the time, engaging and putting out content; as if life (and self promotion) didnt exist before that venue of communication came along.

People in general are ADDICTED to social media, particularly twitter, FB & IG, and that’s by design.

And now, just like any addiction, the high we get has become toxic…

Hip poor math challenged Mush up to the fact that it will take 300 years + - to get his $44 billion back at $8 bucks per each account.

BTW: How does Mush protect “free speech” while charging the public money for that very said “free speech”? You can’t make this fascist pretzel logic shit up. 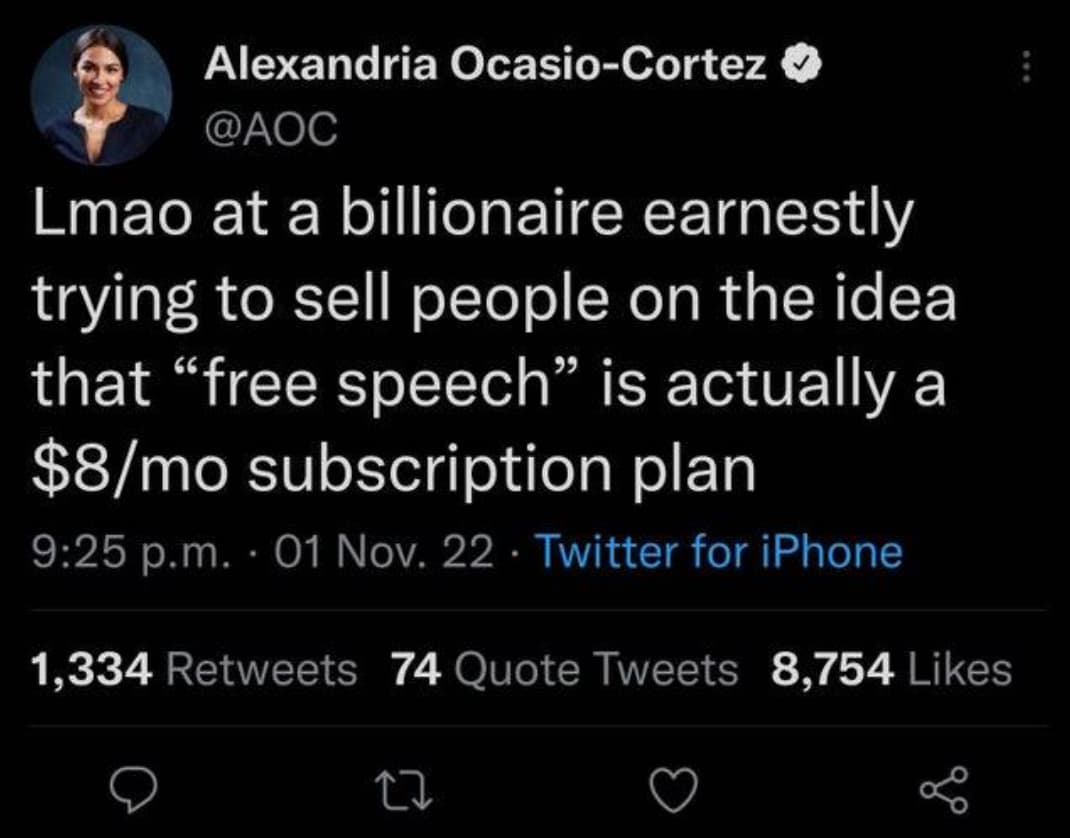 But if you’re not interacting then…

People matter, not clicks. Once engagement became clicks and not conversation we took a real bad turn.

I only found about this latest act in the Twitter Shitshow from Beau.

Musk did mention something about having a Blue Check as a way to get through media paywalls. Don’t know that it’s $8 worth, but if I could access a lot more newspaper without subscribing – and instead having Twitter dole out micropayments so I can read articles a la carte, I have some interest. I should be reading stuff from a bunch of different newspapers, but with so much paywalled I’m really limited to a handful.

The Digital Overview Effect of the internet has conditioned many people to believe that they “need” to be online all the time, engaging and putting out content; as if life (and self promotion) didnt exist before that venue of communication came along.

But this ignores the centrality of Twitter to the media landscape. Especially with the disappearance of reliable formal local news sources, Twitter has become maybe the most trustworthy source of information on say, school board politics in mid-sized cities in the midwest. All of that critically important local news that doesn’t pay enough to be covered by for-profit media. And part of why it works is because the people reporting have blue checks: they have a permanent digital trail of their work on Twitter.

It’s frankly scary the extent to which this one app has become central to news in the US.

I’m not sure what was meant by media people, but to your point, Randall Park is notably not on any social media and seems to be doing fine. His friends had to tell him recently that a video of him went viral on TikTok, and he had no idea what TikTok even was.

I keep wondering why no upcoming mainstream competitor is seeing the decline of twitter as an opportunity to draw the disenfranchised to their platform instead?

Do they just not exist, outside of small bigoted cesspools like Gab and Parler?

But this ignores the centrality of Twitter to the media landscape.

The manufactured landscape; it’s not inescapable.

Twitter has become maybe the most trustworthy source of information on say, school board politics in mid-sized cities in the midwest.

How utterly fucking depressing that is, if true.

Thanks for that momentary sense of demoralization, and you have a nice day now.
I have no interest in engaging you further on this topic.

Conservatives are seeing Musk’s purchase of Twitter as a victory. I think in the long term it will be a Pyrrhic victory for them at best. Musk will lose money, Twitter will become less relevant, perhaps another Twitter-style platform will emerge and dominate that has all the moderation “problems” the trolls bumped up against before, and we’re back to square one. There’s your “reset.”

Because it is nigh impossible to run sustainably, let alone profitably. Most are smart enough to not waste their fortune playing catch-up to achieve even what Twitter got, and Twitter was never really a money maker.

I love Stephen King, and if he left twitter and endorsed a new platform I’d be tempted, but “Famous Horror Icon invites world to engage in new Virtual Community” has obvious horror movie exposition written all over it.

I dunno that I’d go with “good idea marketed badly”. Cause given what he’s talking about subscribers getting for their $8, and that verification was meant as a (half assed) moderation thing.

It sounds like he’s not selling status. It sounds like he wants to sell priority. $8/month is a bargain to skip out on some moderation and make your bots and misinfo more visible.

THAT, right there, is the problem.

The mutation of unverified bullshit by anyone into genuine newsworthy fact is killing us.

There’s no way fascists or corporate voices intent on profit over climate would get a little blue tick and then lie. Except they did.

Twitter is an unnecessary playground for shit ideas to spread without restriction now, no matter how many of us previously used it for good.

For media, these incentives flow from the murky waters of necessity

In its UX and architecture, Twitter has always been a particularly frustrating necessity for any journalist or expert commentator who wants to make a more substantive and well-supported point. I’ve never seen a site that required more kludges and workarounds simply to get a message across: chopped up threads of numbered posts best unrolled in Threadreader; embedded scanned images of pages of text; embedded videos that form the substance of the posts; specialised apps for posting; browser plugins to change around the UI and do simple automated moderation that Twitter can’t be bothered with; etc.

I understand that the site’s reach has metastasised to the point where these blue-check media folks feel they have to use it, but if (as is likely) Musk’s changes make things worse by devaluing their status and turning the platform into a fascist and bigoted cesspool then they might start looking at newsletters, blogs, and at different ways to market themselves to audiences that appreciate their work.

But this ignores the centrality of Twitter to the media landscape

And that ignores the fact that there was a functioning media landscape for decades prior to social media.

The manufactured landscape; it’s not inescapable.

And that ignores the fact that there was a functioning media landscape for decades prior to social media.

I guess I should add that some mental laziness and personal complacency probably play a big part in the twitter addiction as well; people are overly used to going to twitter first, it’s become habitual.