My 15.6-inch Android device is smeared with food and grease, and I love it

And soon we’ll all be able to enjoy tablets smeared with food and grease, courtesy of Chilli’s and Applebee’s!

Then again, there aren’t many great Android solutions (or at least those from manufacturers with any name recognition) with this large a screen, so you take what you can get. I’m hopeful that Samsung could have a 12.2-incher out next year, but that’s yet to be confirmed. There are also rumors of a 12.9-inch iPad, if you’ve swallowed the iOS Kool-Aid.

Do I get points for noticing that the screen image is from the 1950 cartoon “Gerald McBoing Boing”?

You can get a full featured 15.6" Windows laptop with batteries and the same screen size for $300. All it’s missing is the touchscreen. How hard would it be to reorient the display, I wonder?

Are people actually capable of experiencing ‘joy’ at Applebee’s? I thought that there was some sort of suppression field. 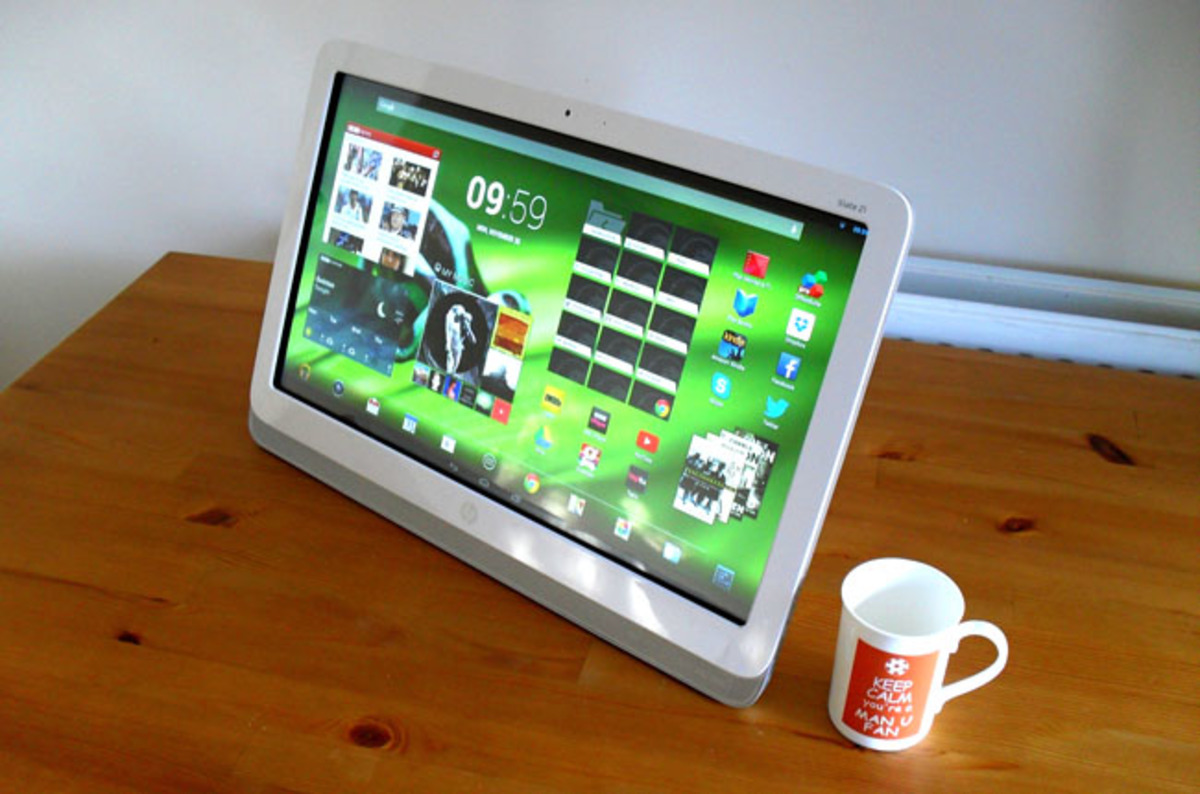 Unless they’ve done something really ghastly (which would be in character; but I haven’t heard anything one way or the other), their mellifluously named ‘Slate 21-k100’ would seem to be a superior offering. Still not ideal, notably on the RAM front; but superior in most other respects to this one, and for $100 less.

I have an Acer Smart Display DA220HQL with a 21.5 inch display that sits on a movable arm in front of my exercise equipment. It’s not the fastest thing in the world and there seems to be quite a few apps that won’t run, but it retails for $340 (here in Taiwan anyway). It makes working out a lot less monotonous.

ASUS TFT 100. with the optional keyboard/auxiliary battery/clamshell case. Holds a charge all day long.Finds the middle ground nicely. Like a Droid netbook, I’d say. Only drawback is that you need external speakers to get really good sound.

I use my ipad in the kitchen as a cookbook.

Yeah, as a Galaxy Nexus owner who isn’t getting Kit Kat thanks to the TI OMAP division not existing anymore, I’m assuming the thing is dead tech. Does the thing have an HDMI port or an MHL-capable USB port? Apparently the chipset is capable of HDMI out. This thing uses the 4430; the GNex used the 4460.

I honestly wouldn’t mind such a beast. Even a 10" screen can be a bit small sometimes.

And I’ve got to get on a soapbox about the original writeup: if I were to unplug my pre-iPad flat-screen monitor, take it off the stand, and put it next to an Android tablet, one could argue that both look “iPad-like”.

I really think this is the crowning use for a tablet. We keep a laptop in the kitchen but it only gets used for the odd recipe look-up. Everytime my aunt brings her iPod by for a dinner visit it ends up being used for the same, but spooling family pictures, music, and videos while we all cook together. There’s nothing to jam up, its easier to work with when you’re wrist deep in turkey. So it ends up fitting into the flow of things incredibly seamlessly.

Hm. I’ve been pondering whether it would make sense to have a similar device for the workshop. Something low-enough power so it doesn’t need vents and can be sealed against sawdust and metal shavings… inductive charging and bluetooth audio so it doesn’t even need those contacts… Doesn’t need apps; all it needs is to be fast enough, and have enough memory, to browse/stream/PDF/print via WiFi to my main machine and to the net. (Bonus would be to support virtual terminal to the main machine, so I could access apps there if needed.)

And it would help if it was relatively cheap, of course.

Something like that should be available off-the-shelf these days, right?

Personally, I like the idea of a house full of “terminals”–if you want to sit down at a desk, and use a large monitor and keyboard, or lounge on a sofa and peruse a tablet, or if you want to use an oversized television like display, you should have seamless access to your applications and data-- sort of an idealized, more flexible, and more open version of how I use a iMac, iPad, and appleTV to do my home computing. Of course, I’m trapped in the apple ecosystem, so if some other company comes out with a really cool interface to my data, I can’t avail myself of that option. But iCloud does offer a glimpse of what’s possible when data isn’t tied to a specific piece of hardware.

My “jukebox” machine runs a remote console server so I can open it in a window and fiddle with it remotely. Obviously the remote screen isn’t as responsive as working with it directly, but for most things short of games it’s more than good enough.

There’s already been independent/local chain restaurants here in California for several years that do the whole order/pay thing through tablets (generally modified iPads). It’s a neat gimmick and I can see how it is kind of the modern version of the automat, allowing the minimum of human contact. And my inner asocial geek enjoys it and awaits the final version where the food will be delivered by robots.

I have not yet become accustomed to signing my name with my finger. Then again, I still get irritated when badly designed credit card terminals translate my lovely scrawl into a frightening collection of lines at odd angles. It’s a formality, of course, but I’d wish the hardware at least try to mimic pen and paper.

The first time I signed on an iPad Point-of-Sale setup I thought it would look like those crappy scrawls I get on the credit card terminals. It looks perfect every time.