My favorite multi-tool: the Leatherman Wave

Awesome tool. I actually think that I like the old-style Wave a little better because of the bigger “double-fold” scissors. Still the new Wave is a very worthy tool.

The sad thing is that this tool runs the risk of getting you in trouble with the police in many countries (England, Australia) and/or cities (Chicago, for example).

EDIT
Also note that the nylon case allows you to “side carry” where the knife lays horizontal on your belt. This is MUCH more comfortable, as I never feel the tool digging into my side when carried like this. The only down side is that the velcro starts to wear out after a while, and the tool is more prone to falling out like this. Still, it is worth it for the extra comfort. I have to buy a new case about once a year, and they are under $10.

This is my go to tool. I have had mine for about 4 years now and I don’t think there is a day that goes by that I am not using it. It is sitting on my desk beside my laptop right now where I just used to to dismantle 8 computers to get ready for recycling. There is not a tool on this thing that is wasted. I use everything. Scissors, bit driver, saw, pry bar, bottle opener…oh yeah pliers too. Best father’s day gift I have ever received.

Had mine over a decade, always with me. They finally perfected the tool as far as I’m concerned, the right blades and designing the pliers so you can apply pressure without a sharp edge digging into your hand. The bit holders really make it, among problems with older models is once you strip the screwdrivers, the tool is done. Now they’re not just replaceable, you have every size phillips, torx and allen on your hip. Couple of years ago I snapped off the tip of the straight blade doing something stupid, they replaced the whole tool for free. That’s the kind of customer service you don’t see much of. My only criticism is I’d like to see the replaceable wire cutter jaws like they have on the “super” model.

After it saved my bacon once again yesterday…

And for where one of those is a little too big: 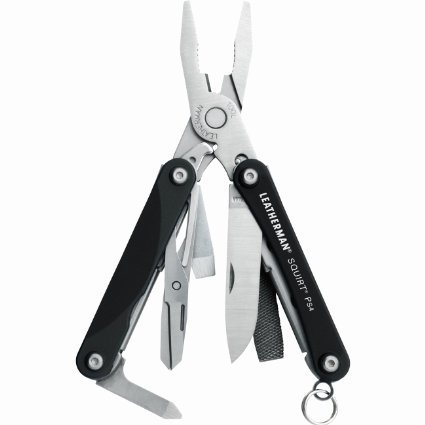 Not nearly as powerful as the Wave of course, but totally invisible in your pocket and frequently invaluable when at the office or out on the town.

Of course those stupid evil motherf#4ers at the TSA will still confiscate them since they’re soooooooo dangerous.

I like the skeletool better. It might not have files and scissors, but it’s got the tools I need the most, it’s a lot lighter than the wave, and, most of all, it has a reasonably large blade that can easily be opened one handed, just like a good pocketknife.

Also a Wave fan, have owned and used mine for many many years. Once after a hikey trip, hugged my then-girlfriend at the airport, she realized I was still wearing it. Ran like crazy to the “Mail-it-home” station, barely made my flight. Very happy to be re-united with it weeks later. Indispensable. I probably use the pliers more than anything else.

I got the Wickes version for 18 quid. I thought it’d be a lightweight, but it’s on its second year now and is proper sturdy. I used to be a Swiss Army Knife guy, but damn! Pliers!

My current favorite is the Leatherman Charge XTI. http://www.leatherman.com/89.html It is no longer produced. I have had mine for over 10 years and it is still a great knife. Needs a bit of sharpening, but I can get that done locally. (I live about 5 miles from the Leatherman factory.)

I have had a couple of Waves. The biggest problem was that the scissors would seperate after a few years of use. The original Wave did not have the locking feature on the screwdrivers. The new ones do. Absolutly needed. Having a knife fold up on your hands while working on something is no fun.

I have had a couple of Waves. The biggest problem was that the scissors would seperate after a few years of use.

Yeah, that’s been my problem, too. I did get it repaired by Leatherman quickly and without hassle (other than being out of the tool for a week or two), but I’d rather the scissors just worked, so I’m ok with the idea of slightly smaller ones that don’t break.

When you live in Portland, you just stop by the corporate headquarters and trade it out. Great customer service.

Victorinox does make Swiss Army multitools now. Can’t vouch for them as I’ve never used one, but they exist.

Wave is pretty awesome, especially if you get the extra screwdriver/hex/torx sets, that slide right into the belt holster. I bought one years ago when I got tired of looking for the toolbox in the lab.

Y’all never put anything back.

My father got me an engraved multitool maybe 20 years ago. I don’t use it anywhere as much as I used to because a) my job has changed away from hardware to software, b) the TSA thing.

OTOH, I did take it on a 2 week trip to Italy last year, when I was allowed a free checked in bag. It proved very handy, from luggage repair to slicing up cold cuts and pastries in a hotel room.

Just yesterday I ordered three Wingman units, engraved, for the sons of a college friend. They are outdoorsy scouting kids, and I think they’ll get some good use out of them.

Oh yes so much agreement here. I’ve been using one of these (original model Wave) since the late 90’s and it is by far my favorite and most useful tool I own!

Ya, I have the little E4 (wire cutter/stripper version)… It is very useful.
FYI: it did go past the TSA several times when I “lost” it in my backpack – it was wedged in a little opening in the bottom.

It mostly gets through but then you get the occasional hardass watch out badass cop over here guys - I’ve had two taken, and at the price I don’t risk it any more.

I like the wave in theory, but I find it slightly too big for comfortable carry in my pocket, and I’ve had bad luck with batman utility belt type pouchy things. I use the (discontinued) Leatherman PST-II instead, or an original Leatherman if I’ve temporarily lost the PST-II.

The wave’s better if you don’t mind the extra bulk, though. The handle is more comfortable, so you can squeeze harder without hurting your hands.

I have the original, as well as the first-generation Wave. The original got a lot of use, because it was all I really needed for where I worked, and it isn’t too bulky. But, yeah, the edges on the handles made it tough on those rare occasions when I had to squeeze a bit harder.
But after 9/11, it was reclassified as a potential mass-murder device, so I couldn’t use it any more.