Homo sapiens have at most a few percent neanderthal DNA in our genetic makeup.

Er, no. We are so genetically close to H Neanderthalensis that we have been regarded [edit - by some biologists] as just different races of the same species*. (An alternative way to look at this is that the very notion of a “species” has been superseded by DNA analysis.)

What is true is that if you take DNA from Neanderthal specimens, and DNA from some African people, and look at the differences, and then take a typical European, the European will have a few percent of the Neanderthal genetic markers, i.e. there has been some limited interbreeding in the past. But we’re talking about tiny differences, genetically speaking.

*i.e. homo sapiens sapiens vs homo sapiens neanderthalensis. But increasingly I have doubts about the sapiens bit. What’s the Latin for “easily fooled by psychopathic narcissists”?

What’s the Latin for “easily fooled by psychopathic narcissists”?

Homo sapiens have at most a few percent neanderthal DNA in our genetic makeup.

Speak for yourself! I have lots, and I am not even wearing makeup. 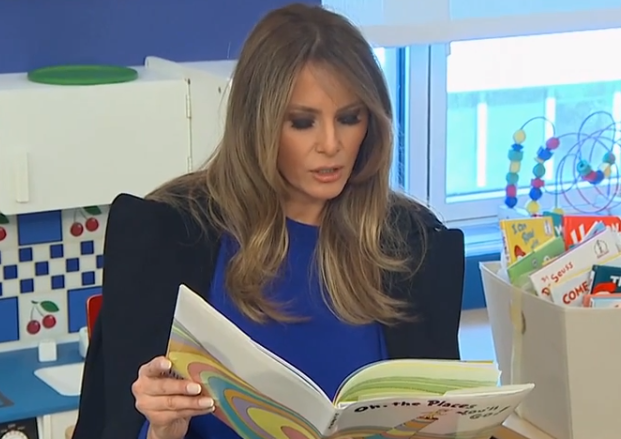 Melania Trump has said the power of nature can help sick children recover, asserting that she is a "passionate believer" in the power of nature's elements in improving health and well-being. During a visit to a paediatric ward in New York City, Ms...

This is Trump’s plan to feed the poor. Feed them to the rich.

If the diet was so great, why are they extinct?

We don’t descend from neanderthals so what bearing would their diet have on modern humans.

But yes, a study of contemporaneous humans would be more accurate.

So is it wrong to think ahead and start eating people now?

Eating other humans is too strong of a vector to do it very often. You never know where they’ve been. (OK, unless you’re practicing endo-cannibalism, and that’s a much different situation.)

[…] and everyone had every kind of parasite all the time.

The minute you start raging against beans as some how not a good thing to eat. You have lost the thread. They’re good for your heart after all.

Yes, and life expectancy was around 30 years

YOU KNOW WHAT. It totally ignores your joke. But that whole “life expectancy was blah, blah blah” response always drives me nuts. With out exception life expectancy numbers for the past are always skewed horribly downward by incredibly low infant mortality rates, and low childhood survival rates. Human life span has pretty reliably been in the 60’s to 70s until really recently. As in if you made it to twelve you’d likely make it to 70 something. But in the past it was really rare to make it to twelve.

Oh FFS, the typical Neandertal was still HUMAN. Of course there’s no such thing as a “typical paleo diet” because HUMANS EAT ANYTHING THEY CAN SQUEEZE A CALORIE OUT OF, AND SOME THINGS THEY CAN’T. VOLUNTARILY.

Holy crap. We’ve been around basically how we are for 8 million years, of course one or two dozen thousand years doesn’t change much.

The paleo diet fad is moronic, and I can’t believe people thought stereotypes and guesswork would ever be accurate.

Fuck, there’s better evidence that humans evolved on a diet of booze, than of these paleo diet fad bullshit. We are crazy well-adapted to processing alcohol. We can easily drink and get energy out of amounts of alcohol that would kill most other animals.

I’m pretty sure that the paleo diet mostly consisted of “whatever edible things people were able to get their hands on.”

A diet that, if modern hunter-gatherers are any guide, is about 90% vegetarian. Lotsa gathering plus an occasional bit of hunting.

There are regional variations, though. More meat as you approach the poles, although that’s primarily seafood.

We can easily drink and get energy out of amounts of alcohol that would kill most other animals.

Which, entirely coincidentally, is pretty much my diet…

E.g., from Were Neanderthals a Different Species?:

… this suggests that the male hybrids might not have been fertile, whereas the females might have been fully fertile,” Svante Pääbo told Richard Harris of National Public Radio…. We might have inherited most of our Neanderthal genes through hybrid females, he said.

Another author, David Reich of Harvard Medical School, told reporters that we and Neanderthals “were at the edge of biological compatibility.”

“This underlines that modern humans and Neanderthals are indeed different species,” Fred Spoor told New Scientist. Spoor is also at the Leipzig Max Planck but was not a part of the Neanderthal research. Other scientists are more cautious about making so firm a declaration, but it’s clear that many lean toward that same conclusion, that Neanderthals were not Homo sapiens neanderthalensis but, rather, Homo neanderthalensis.

and from Neanderthals and humans: an interspecies affair to remember:

Many of our living primate cousins interbreed naturally in the wild: estimates show more than 10% of primate species do it!

Doesn’t this run counter to the very definition of a species? Not unless you take an overly simplistic, or iconoclastic, approach to defining them. Even the man credited more than anyone with developing the “biological species concept” based on reproductive isolation – the late Ernst Mayr – recognised that interbreeding sometimes occurs between them.

The latest findings from genome comparisons reinforce the status of Neanderthals and modern humans as distinct species.

The last paragraph you cite shows the problem of trying to shoehorn a pre-DNA concept - species - into a post-DNA world, which I alluded to in my post.

One of the things that interests me in the sociology of science - there is such a thing but I am not suggesting relativism - is the way religious prejudices prevent objective analysis of evidence. Galileo is a good example. The religious idea of human exclusivity has been very powerful - persuading psychologists to minimise chimpanzee and gorilla use of language, and constantly searching for structures in the brain which make humans unique. The fact is that tool making and even raft building long predated modern man.
Interbreeding between sapiens and neanderthalensis may have been rare and difficult but the evidence is that it happened, and that the popular idea of them as some kind of “ape-men” is utterly wrong. It was the suggestion in the original post that homo and neanderthal had very different DNA to which I was objecting.