I had one of the shooting victims interviewed in that article when they became a college student. It was incredible to me how normal the kid was, considering. But they went on to dedicate their life to trying to stop that stuff from happening again.

I don’t often put site author’s posts on the #NeedsMoreLikes thread, but when I do…

Girl wanted to keep a goat she bought from a county fair. They sent cops 500 miles to seize it and drag it off to be slaughtered boing

Also consider that they turned down the money, knowing that they would still have to give her the money it sold for. Fairs only keep a modest fee, maybe 10%, of the sale. So there was no monetary loss for the fair. This really was just about teaching the girl a lesson. The snag for the fair is that they sent out cops to enforce their contract instead of going through the courts. This shows that their whole interest was in making sure the goal was slaughtered, irrespective of its ownership or …

You’re sitting in a meeting, and your wife texts you, and it pops up in the corner of your glasses. “Wishing I could be with you. I hate this meeting. There’s no reason for me to be here.” You want to respond, but you don’t want to pull out your phone because that’s kind of rude. I mean, if it were acceptable to be on your phone you would have been this whole time, because there certainly isn’t anything in your meeting that you need to pay attention to. So you use a “virtual hand” to text back.…

My personal nickname for him is “Homeless Hitler”.

C’mon, fellow mutants. That nickname for steve bannon deserves to earn a Good Reply at least.

I squeed watching the second half of this mouse video clip

LG adding NFTs to its smart TVs because

Some say the world will end in fire,
Some say in ice.
From what I’ve tasted of disdain
I hold with those who say blockchain.

( an homage to robert frost ) 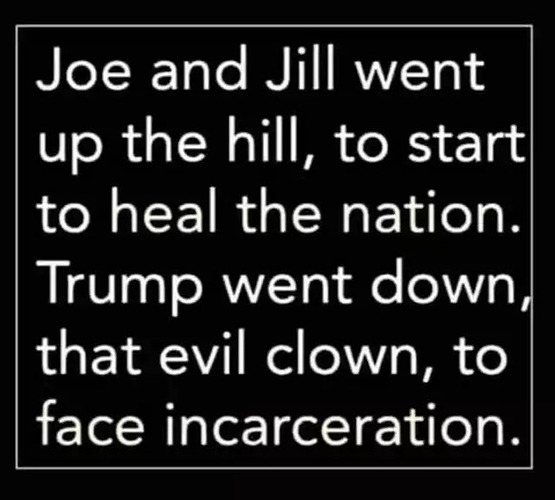 I think the phrases “what you just said doesn’t have anything to do with the subject at hand” and “what you provided as evidence doesn’t support any of the conclusions that you made” apply to 95% of the verbage falling out of Republican politicians’ mouths these days.

Chokepoint Capitalism: how Big Tech and Big Content captured creative labor markets and how we'll win them back boing

The peasants who overthrow monarchies are not hypocrites because they lived under feudalism.

(even better in the context of the thread)

California is the Florida of California.

I’d be equally satisfied if the thesaurus was hurled, tossed, flung or pitched.

Stop, gather, and collect how clever this post is!

a right and proper meme edit

If they weren’t billionaire oligarchs I’d say that’s a possibility. But these guys have minions and henchpersons to do their balcony shenanigans and dumb ladder/beer cooler stunts.

Watch the Tuned Mass Damper inside a Taipei skyscraper react to this weekend's 6.9-magnitude earthquake boing

Silly draftee doesn’t know defenestration is the only acceptable way to deal with troublesome public officials in Russia.

You’d think the Russians, of all people, might have heard one or two stories about what happens to armies that go in with inadequate supplies and not enough time to wrap the campaign up before winter hits. [image]

Shame the graphic in the post above does not reappear here, but anything that oh so pertinently uses what Edward Tufte called “Probably the best statistical graphic ever drawn” needs more likes.

The Daleks had an understandable and clearly-articulated policy, a firm commitment to their mission, and a certain level of effectiveness. Moreover, they weren’t beholden to a mob of shadowy plutocrats, nor dominated by a hereditary clique of bumbling public schoolboys. When you think about it, there’s a lot to like about the Daleks, at least in comparison with the Tory party. As for the idea that the Conservatives have something worse in reserve, this is beyond any doubt. The ones whose names…

Still use that one in my Information Design class.

That really was the final straw. They’re just from different worlds. He was born a shoot-elk-from-a-zeppelin man and he’ll die a shoot-elk-from-a-zeppelin man. It was bad fate that he opened his heart to a dyed in the wool shoot-hogs-from-a-helicopter woman but the heart wants what the heart wants. When their eyes locked through their individual scopes as they were hovering over that petting zoo, there were fireworks. Sure, the explosions were because she shot his blimp down with a tracer round.…